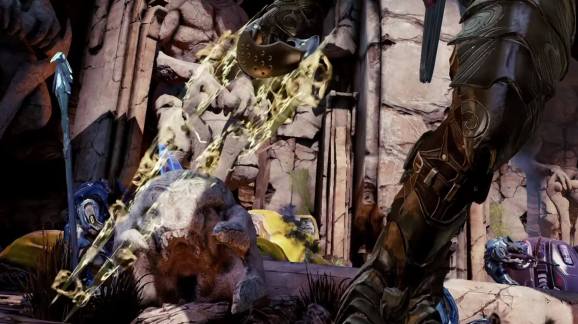 Halo in my Killer Instinct!

Microsoft and developer Iron Galaxy are keeping the teases coming for the new season of downloadable content for Killer Instinct.

It looks like the Halo character Arbiter is coming to Microsoft’s free-to-play fighting game. Developer Iron Galaxy teased the power-sword wielding character during the Killer Instinct World Cup tournament that is happening right now in San Antonio as part of the Penny Arcade Expo South event. In the video that teases the fighter, you can clearly see the Arbiter firing up his weapon before the clip cuts to the Killer Instinct logo. Obviously, Microsoft is planning for crossover characters like these to keep current Killer Instinct players engaged and spending money. The company is also likely incorporating Halo to bring in new fans and to bring back lapsed players to the fighting release.

Killer Instinct is a notable title for this generation of consoles because it is one of the first and biggest free-to-play fighting games. Prior to the launch of the Xbox One and PlayStation 4, free-to-play offerings were rare. But studios began experimenting with the business model early after the release of those systems. This has led to a market where a developer can constantly support a fighting game with three years of content without having to charge an upfront price for the experience.

Check out the Arbiter tease below:

In August, at the Gamescom fan convention in Germany, Iron Galaxy announced it is bringing the Battletoads character Rash into the mix. He has already debuted during a testing period where players were able to give feedback about what they liked about the character and what they would like to see changed.

And Iron Galaxy previously teased Kim Wu for the third season as well. She is now confirmed, and players are getting a chance to try her out at PAX South. On top of that, the studio released the following trailer for the new fighter: