For almost a year, Valve chief executive Gabe Newell and other company representatives have been saying that the HTC Vive won’t make you seasick from motion-sickness, as happens with other virtual reality headsets. I have confirmed that is not true since I got mild motion sickness while playing a preview demo of the space-combat sim Elite: Dangerous for the Vive.

The title from developer Frontier Developments is one of a dozen releases that I saw for the HTC Vive, the VR headset for the PC that debuts in April. The system is Valve and HTC’s bid to be a player in what could be a $30 billion industry by 2020, according to tech advisor Digi-Capital. But of course, if the industry is to reach that size, it better make sure that its experiences don’t make people throw up. Of all of the demos that I tried, only Elite: Dangerous made me sick. And that was the only game that featured a whole lot of motion inside a virtual world. Another journalist who was looking at the game separately also told me that it made him sick.

Elite: Dangerous is a popular PC-based space adventure and combat simulator with more than 1.4 million downloads for its non-VR version since its launch in late 2014. Frontier Developments is adapting Elite: Dangerous for the HTC Vive, which is based on Valve’s Steam VR platform. I saw the demo at Valve’s event in Seattle last week. Elite: Dangerous has a player-driven story in a kind of open world, with more than 400 million stars in the Milky Way Galaxy as a setting for the game. You can fly in space but also move down to the surface of the planets. The 3D graphics look awesome, with realistic spaceships and colorful explosions and planetary animations.

Above: Elite: Dangerous can do space combat in VR.

I had some expert coaching, so that wasn’t the problem with this demo. Instead of the touch controllers, Frontier used a different input system to maneuver the spaceship. It had mounted an off-the-shelf joystick on a chair, which I used with my right hand. Then, I used a throttle in my left hand to control acceleration. It was a familiar setup, as it reminded me of older flight-simulator systems.

I started out in space, hunting other spaceships to attack. It reminded me of the old Wing Commander titles, as I was looking from my cockpit through a window of the spaceship. I looked at my minimap to see where the enemies were. It was a bit hard to spot them in 3D space. By default, I pointed the joystick back and tried to go at mid-range speed as I chased the tails of the fighters. I started shooting at one of the spaceships. But it didn’t blow up at first. So, I kept on shooting at it. It seemed like I hit the thing about 30 times before it blew up, which wasn’t all that satisfying. If I were in a dogfight with multiple ships, I would be toast.

Then, I switched to fighting on the ground. Using the same controls and wearing the same VR headset, I was now in a land rover, an armed vehicle for exploring a planet’s surface. It was kind of like a dune buggy. 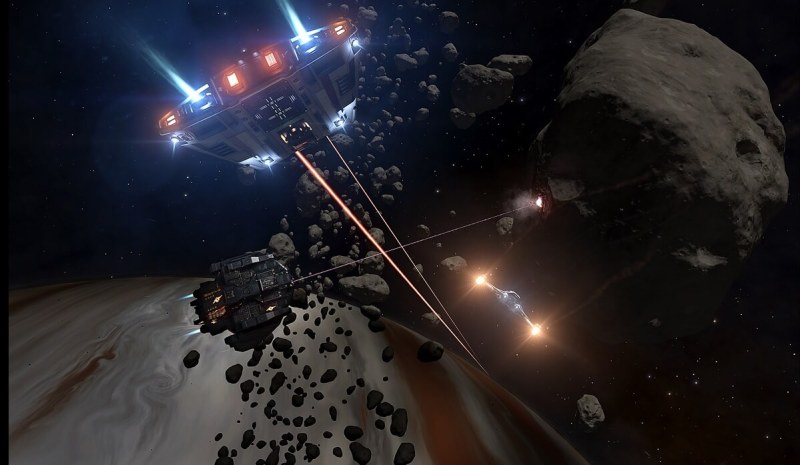 Above: Action from Elite: Dangerous.

The game’s operators warned me to take it nice and easy, driving slowly until I could get used to everything. I started driving around. It was a bumpy, rocky planet. Then, I saw the skimmer drones approaching. I fired on them, and that set me up for some discomfort. The skimmers started shooting back and avoiding me. I had to chase them over the rocky surface. Then, I had to start driving in circles. I noted that I was starting to get dizzy, and they told me to slow down.

I wasn’t able to catch up to the skimmers. It wasn’t that easy to look around and keep track of them, even while I was driving the bugger. I blew up a couple of them, but then I got woozy again.

Now, why did I get sick? That’s an interesting question. Last year, Valve engineer Jeep Barnett echoed what Newell said to the New York Times. Barnett told me that the Vive wouldn’t get you sick because it was more precise than other VR systems.

SteamVR is very different from the better-known Oculus VR headset. SteamVR uses timing sequences in a PC along with the light from spinning lasers in two separate Lighthouse base stations (or laser boxes that are plugged into outlets and are placed at two different locations in a room). These lasers hit the different sensors that are embedded in the headset. Depending on the timing of when the lasers hit the sensors, the PC figures out the position and angle you are facing with the headset.

The PC then shows you the view that you should be seeing, given the position of where you are facing. The lasers are not acting like Kinect cameras in the Microsoft Xbox One and Xbox 360 game consoles. Those systems send light signals out and then capture them as they bounce off of objects and return to the camera. That kind of system takes an extreme amount of processing power to track multiple objects. It gets exponentially harder as you add more objects. 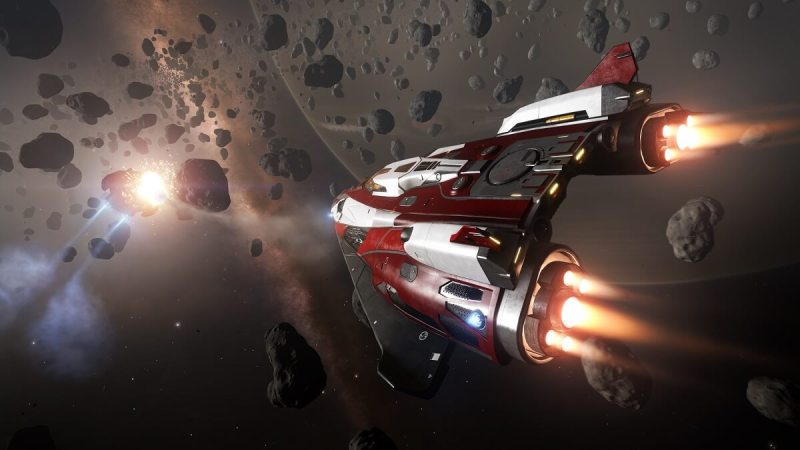 Above: Exploring space in Elite: Dangerous.

“The way the system is designed is very performant,” said Barnett, in an interview with GamesBeat last year. “On the same PC, you can track hundreds of objects, all very easily.”

The stereoscopic headset was showing me images in each eye at a rate of 90 frames per second, or 90 hertz. The system has submillimeter accuracy on location because of the data coming in from the base station and the sensors. It takes just 17 milliseconds to render a frame, far less time than is noticeable by the human eye. The gyroscopes in the headset predict your future head direction and then predict which images you should see. The organic light emitting diode (OLED) displays inside the goggles have to be “low persistence,” meaning they show you what you need to see so that you don’t get dizzy from motion blur. You don’t want objects to bend or smear when you turn your head. These displays need to have high refresh rates and the ability to display the pixels all at once.

That all means that the HTC Vive should be able to keep up with the animation and the changing imagery as I turned my head. But, the demo probably just had way too much motion to result in a comfortable experience for me. As I mentioned, none of the other HTC Vive demos, including the shooters, made me sick. But, no one else tried to depict fast motion in VR.

I’ve had more trouble with other demos on the Oculus Rift, the Samsung Gear VR, and the Sony PlayStation VR. In fact, when I tried Drive Club on Sony’s preview unit of its PlayStation VR hardware last December, I got sick. With Drive Club, Sony set up a steering wheel with gas pedals to go with the racing game. I put on the headset and started driving. But, I spun out around a turn and hit the wall. Then, I tried to take off. As I did so, I was turning and accelerating. That made me turn in circles. And that made me sick.

So, this is a good lesson for VR developers. I don’t mean to call out Elite: Dangerous and Frontier’s efforts with a very good game. But, one of the biggest threats to VR’s expansion to the mass market is motion sickness. Developers should take note. Even with a really good system like the Vive, it’s still possible to make software that gets people sick. I hear that roughly half the population can get motion sickness from VR. This kind of title should carry some kind of warning about comfort level.