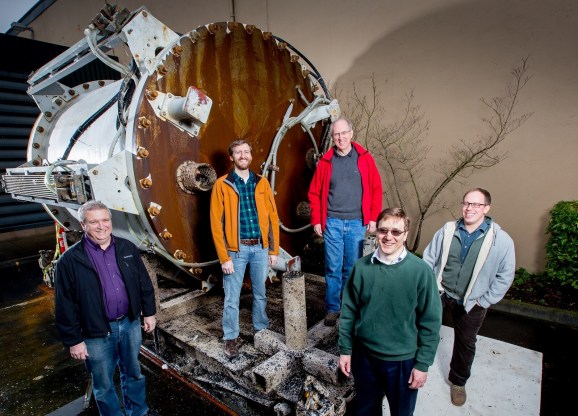 Microsoft isn’t running any web services, like Office 365, through the data center infrastructure inside of these capsules. But Microsoft did build one (named the Leona Philpot, after the Halo character) and set it 30 feet underwater off of the California coast for four months in 2015. The capsules could have their computing hardware replaced every five years, but eventually they could well be kept underwater, without people onsite, for 20 years or more. And they could be powered by renewable energy, too.

It’s an unusual and forward-looking way for a company at Microsoft’s scale — or any scale, really — to operate its core data center infrastructure. It’s reminiscent of the Google barge that some people suspected had been intended to house data center hardware. (Other reports suggested it could be used for retail purposes.) But that project has been forgotten. Major web companies like Google and Facebook are now focusing on using aircraft to deliver the Internet to people, which has taken up some of the spotlight on research into new or better ways to deliver services. But the servers, storage, and networking equipment have got to live somewhere.

One might think putting data centers in the ocean might have environmental repercussions. But Microsoft is indicating that nothing untoward happened in the initial experiment.

“During our deployment of the Leona Philpot vessel, sea life in the local vicinity quickly adapted to the presence of the vessel,” Microsoft said on the Project Natick website.

Now Microsoft is looking to advance the research by building larger capsules. People working on the project have begun devising one three times as large as the first, according to John Markoff of the New York Times.