Now that GoPro has become the undisputed leader in action sports video cameras, it is going after a slower-paced sport: golf.

Pro golfers and their fans want to have their big moments immortalized, just like any other athletes. So GoPro, SkratchTV, and the PGA Tour are teaming up to bring new technology, content, and viewing experiences to golf fans. It could be a lot of eyeballs for GoPro and SkratchTV, as PGA Tour tournaments are broadcast to more than 1 billion households in 227 countries and territories in 30 languages.

GoPro will debut its livestreaming system at the Waste Management Phoenix Open on February 3 with a digital broadcast from the 16th hole. GoPro promises “never-before-seen perspectives” and episodic video content.

“We are excited to partner with GoPro to bring new and engaging perspectives to PGA Tour fans. GoPro’s award-winning content production will serve as an excellent platform to create compelling narratives about the PGA Tour and its players.” said Rick Anderson, executive vice president of global media at the PGA, in a statement. “We’re intrigued to ‘GoPro’ the game of golf, opening up our sport to new audiences and giving fans some new ways to enjoy the game.”

In Phoenix, the PGA Tour will stream the Pro-Am tournament from the stadium-like 16th hole at TPC Scottsdale’s Stadium Course. This new Pro-Am show will be hosted by Erik Anders Lang from SkratchTV, creator and host of a new digital series called “Adventures In Golf.” PGA Tour Entertainment will utilize GoPro’s HeroCast technology and production expertise to capture and broadcast unique coverage of the Pro-Am, including on-course interviews.

“This partnership with the PGA Tour and SkratchTV will enable our team to capture unique views of the game and to tell the stories from the TOUR, and about golf lifestyle, in a whole new way,” said Todd Ballard, vice president of global sports entertainment marketing for GoPro, in a statement. “The Waste Management Phoenix Open will serve as a starting point to collect content for our upcoming, season-long initiatives, and it will be a great opportunity to showcase our integrated broadcast technology.”

As part of the relationship, GoPro will produce episodic videos that bring fans inside the ropes at PGA Tour events, giving them unique access to the events and athletes, including recently signed GoPro athlete and PGA Tour member, Justin Thomas.

Now you’ll know what it’s like to escape a sand trap or see a drive from the caddy’s point of view. 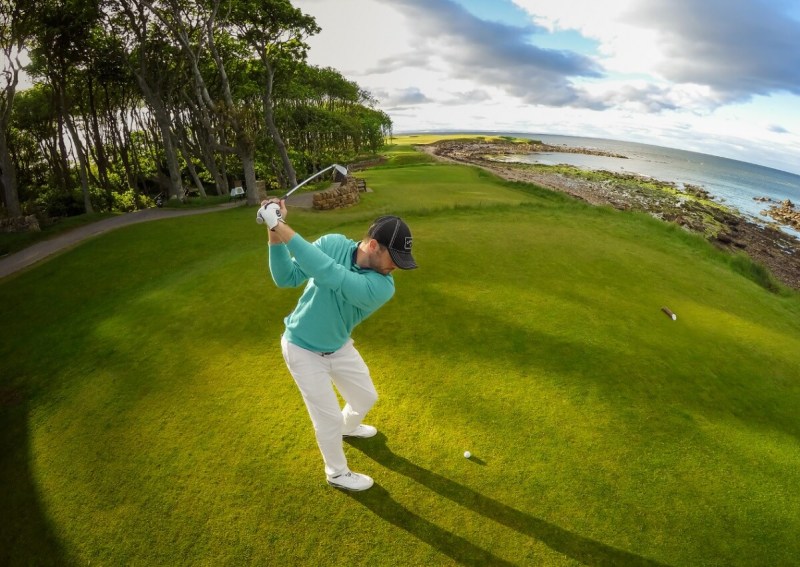 Above: GoPro and SkratchTV promise unique angles for their PGA Tour livestreams.