Yahoo (YHOO) announced plans today to implement an “aggressive strategic plan” in an effort to simplify itself as the company’s long-awaited turnaround fails to materialize. As part of that effort, it will be laying off approximately 15 percent of its workforce, consisting of 9,000 employees and fewer than 1,000 contractors.

In addition, the company will be closing five offices in Dubai, Mexico City, Buenos Aires, Madrid, and Milan. Yahoo announced the news within its fiscal fourth quarter 2015 earnings. It expects to save about $400 million annually from this move.

Analysts, on average, expected Yahoo to report revenue of $1.19 billion and earnings of $0.13 per share for the quarter.

Shares in the company were down 1.72 percent for the day and closed at $29.06, although it briefly shot up after reports suggested Yahoo would announce it was exploring “strategic alternatives,” meaning that a potential buyer may have surfaced — maybe Verizon?

“Today, we’re announcing a strategic plan that we strongly believe will enable us to accelerate Yahoo’s transformation,” said Marissa Mayer, Yahoo’s CEO. “This is a strong plan calling for bold shifts in products and in resources. We are extremely proud of the billion dollar plus business we have built in mobile, video, native, and social. Our strategic bets in Mavens [mobile, video, native and social] have enabled us build an entirely new, forward-leaning business of tremendous scale and growth in just three years. The plan announced today builds from that achievement and will dramatically brighten our future and improve our competitiveness, and attractiveness to users, advertisers, and partners.”

The new Yahoo will be focused on growing engagement with its users. Its portfolio of products will be trimmed down, with its consumer area including Search, Mail, and Tumblr. Advertisers will still have Gemini and Brightroll. Yahoo will also consolidate some of its Digital Magazines this year under one of its four core categories and will shut down the rest. Noticeably, Flickr is absent from the mix.

Products that are on the chopping block include Yahoo Games and Yahoo Smart TV, two legacy services that the company has described as not meeting growth expectations. This follows the shuttering of Yahoo Screen in December. 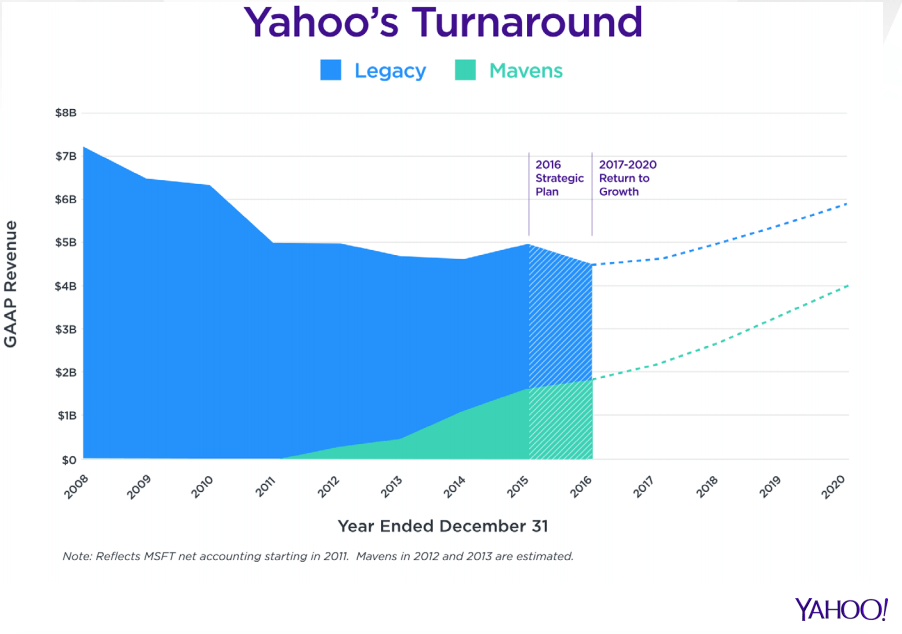 Mayer’s Mavens program will continue to remain operational as it brought in $1.6 billion in revenue last year, a 45 percent increase that apparently surpassed Yahoo’s expectations, which is good considering the company’s mobile developer conference is coming up in a couple of weeks. Mavens is expected to bring in $1.8 billion this year.

The number of markets Yahoo is focusing on has also decreased — it said that it will concentrate its efforts on news, sports, lifestyle, and growth categories across high-performing markets like the United States, Canada, the United Kingdom, Germany, Hong Kong, and Taiwan.

The past few months have certainly not been kind to Yahoo, including Mayer. Shareholders are said to be tired of her tenure as head Yahoo’er and only her resignation will appease them. What is being proposed today certainly appears to be “aggressive,” but could also be interpreted as a last-ditch effort to turn the company around. It’s almost scraping the bottom of the barrel.