Over the weekend, Samsung added support for content-blocking plugins to the browser preinstalled on its Android phones. The first plugin available for Samsung’s browser was Adblock Fast, a free and open source solution available on Google Play. Yesterday, Google removed the Android plugin from its app store.

Ad blocking on mobile devices is gaining popularity thanks to Apple’s iOS 9, which has built-in support for content blockers, and a growing number of options on Android. Samsung is now trying to do the same with its Android browser. Users are drawn to mobile ad blockers due to a cleaner browsing experience, faster load times, and reduced data usage. Publishers meanwhile are forced to look at ways of diversifying their revenue streams.

While Adblock Fast was the first to partner with Samsung, two other ad-blocking solutions quickly joined: Adblock Plus and Crystal. At the time of publishing, they are still available on Google Play.

The Adblock Fast homepage has been updated with a “Find out when Adblock Fast is back in Google Play!” message, followed with a box where you can enter your email address: 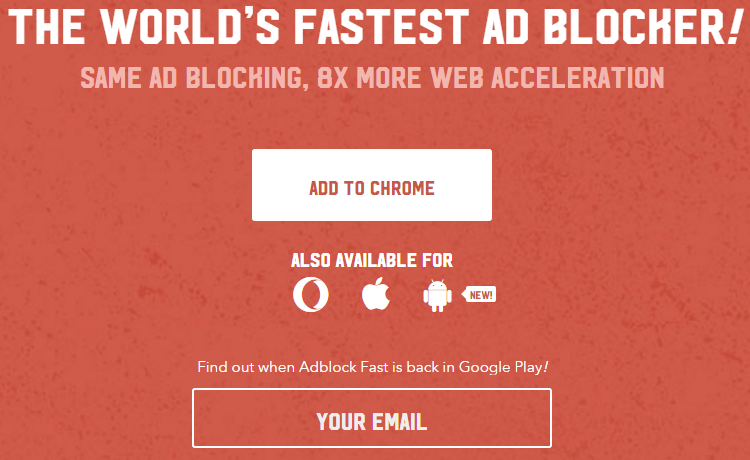 We have contacted Google and Rocketship Apps, the maker of Adblock Fast, for more information. We’ll update you if we hear back.

Update at 9:38 a.m. Pacific: A Rocketship Apps spokesperson is pointing the finger at Google for removing its plugin from Google Play yesterday. According to Adblock Fast, the events unfolded as follows.

The plugin was then “promptly” removed by Google for “interfering” with third-party apps, according Rocketship Apps developer Brian Kennish. Google apparently cited section 4.4 of the Google Play Developer Distribution Agreement. For reference, that section reads as follows:

“We haven’t been able to get an official response from a human there (just autoresponders),” Kennish added. “The only app Adblock Fast interacted with in any way was the Samsung Internet browser and only using Samsung’s API (that we helped them define). I wonder how many Google engineers would call using an API, ‘interfering’.”

The full email Rocketship Apps received is below:

I reviewed Adblock Fast, com.rocketshipapps.adblockfast, and found that it violates section 4.4 of the Developer Distribution Agreement. This particular app has been disabled as a policy strike.

Just as a reminder, you’ve agreed to follow the Google Play Developer Program Policies and additional enforcement could occur if there are further policy issues with your apps.

If you’ve reviewed the policies and feel this rejection may have been in error, please reach out to our policy support team. One of my colleagues will get back to you within 2 business days.

I appreciate your support of Google Play!

We have asked Google again for the company’s side of the story. It’s not clear if this is an automatic removal that might be reversed or if Google will stand by its decision, which would mean other adblocking plugins would also be pulled.

Update at 10:17 a.m. Pacific: “While we don’t comment on specific apps, we can confirm that our policies are designed to provide a great experience for users and developers,” a Google spokesperson told VentureBeat.

Google thus removed the app, but it isn’t confirming so explicitly. A source close to the situation indicates that Google considers this a “unique case” because two apps are required to invoke the ad blocking. Furthermore, the source adds that Google has no problem with browsers which can block ads within themselves via built-in functionality (like Adblock Browser) or via plugins.

Samsung’s browser is thus fine on Google Play, but Adblock Fast isn’t. What exactly that means for the Adblock Plus and Crystal plugins, which also only work with Samsung’s browser, is still unclear. We’ve asked for more clarification.