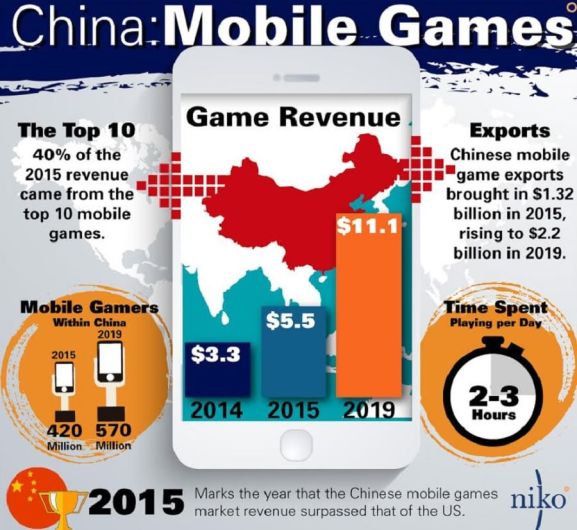 China’s stock market has had a bad year, but the country’s game industry remains strong and on track to grow dramatically over time. That’s the underlying belief behind Chinese game market analyst firm Niko Partners’ annual predictions for the digital games industry in China for 2016.

Lisa Cosmas Hanson, founder of Niko Partners, passed along the company’s 14 top predictions for the year. It expects overall revenues for the entire Chinese game market — PC online, mobile, and console games — to be $26 billion. Niko also predicts that mobile games will rise from $5.5 billion domestically (excluding export revenue of $1.3 billion) in 2015 to $11.1 billion in 2019. That’s healthy growth, but it also means that China is over the hump in terms of its peak growth rate for mobile games. (In this category, Niko only measures revenue generated in China).

It predicts the market for esports — such as professional or amateur tournaments with games such as League of Legends (a online strategy phenomenon) — will also grow. Hundreds of millions of Chinese gamers play and watch esports already. Highly regarded esports commentators earn about $1.5 million per year, just as announcers for esports tournaments.

And as Alphabet (Google’s new parent company) has signaled, the Google Play store will likely debut in China during 2016, boosting Android game downloads and advertising campaigns for mobile games.

Niko Partners expect virtual reality will also hit the Chinese market in a big way, and Chinese companies will build products that compete against VR titans such as Oculus and Sony. This year’s ChinaJoy 2016 show in July 2016 will have a large special VR section.

Meanwhile, investment in Internet cafes, where many Chinese play PC games, rose in 2015 across multiple metropolitan regions. Niko expects that investment to continue, fueled by demand for multiplayer online battle arena (MOBA) games such as League of Legends and Dota 2. Internet cafes will also be strengthened by the interest in esports.

Tencent will probably continue to dominate the Chinese games industry, but it will feel competitive pressure for the first time in a while from NetEase and other more focused game companies. And while the Chinese took a pause because of stock market turmoil in 2015, Niko expects them to invest more capital in growth and market share. There are 171 publicly traded Chinese game companies, 136 of them traded on local Chinese exchanges, 17 in Hong Kong, and 18 in the U.S. The domestic stock market in China will likely see an increase in game company listings, though there is currently a ban on initial public offerings.

Because the market is crowded, Niko expects consolidation of small and mid-sized game companies in all segments, and especially among mobile game developers. The Chinese government approved 750 games in 2015, including 320 mobile games.

The strong dollar means that Chinese game companies may find it more expensive to license foreign titles and game intellectual property, and for Chinese gamers to play foreign games. Because IP will be more expensive, developers will be inspired to build more original games. The Chinese may also license other Chinese entertainment for use in games.

Niko also predicted that the growth rate PC online game revenue will continue to decline, and sales of consoles and console games will be flat in China. Domestic TV-based gaming boxes will likely see modest growth.