Super Smash Bros. fans are zealous, and Nintendo does not want to lose that audience when it transitions from Wii U and 3DS to a new platform.

Nintendo is working on a new dedicated gaming device that it calls the NX. And while the company hasn’t had much to say about this device, one early rumor (from reliable industry analyst Serkan Toto) claims that Super Smash Bros. — the company’s four-player fighting game — will debut alongside it. Yesterday, Nintendo detailed the results of its fiscal third quarter as well as its plans for the new My Nintendo service. And these factors all point to why Nintendo needs to give Smash Bros. fans — who often play the game as a competitive esport — a way to play it on the new console.

Gaming is a $91.5 billion business, according to intelligence firm Newzoo. Nintendo has struggled in this space with its Wii U console only selling around 12 million consoles since November 2012 (compared to PS4’s 36 million and Xbox One’s approximately 19 million since November 2013). Now, Nintendo is expanding beyond consoles to have an opportunity to make even more money from that market. This includes its first mobile games, which we’ll start seeing in March. Those are particularly designed to get back the Japanese gaming audience, which has largely turned away from dedicated consoles and portables in favor of smartphones. At the same time, the company is not abandoning its hardware division, and it is planning to unify its business in an effort to compete with Sony and Microsoft while simultaneously taking on mobile megapublishers like GungHo and Supercell.

Nintendo addressed some of those plans in its investor briefing yesterday, but it did not include any new information about the NX or a new Smash Bros. game. We still don’t know if a new entry in that series (or a port of the Wii U version) will launch with the NX. But the publisher did point out a few things about the franchise that reveals just how important Smash Bros. is. 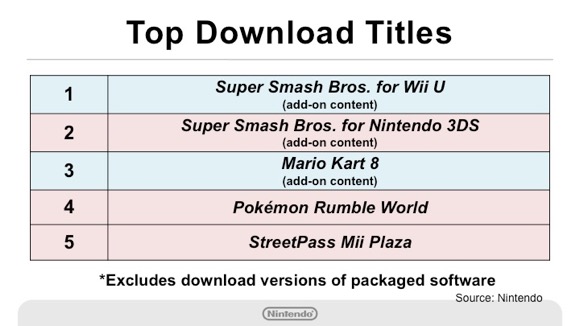 Super Smash Bros. on both the Wii U and 3DS generated more digital revenue in the first three quarters of Nintendo’s fiscal 2016 than any of its other games. That is evidence that the fighter has an engaged audience that doesn’t want to miss out on any of the content Nintendo is releasing.

Fans are so willing to spend money on Smash that they’ve helped grow Nintendo’s digital revenue in The Americas, Europe, and Japan year-over-year. The publisher points out that through the nine months of its fiscal year, it has made $259 million (30.5 billion yen) from digital games, which nearly matches its total digital revenues for the entire 12-month period of fiscal 2015. 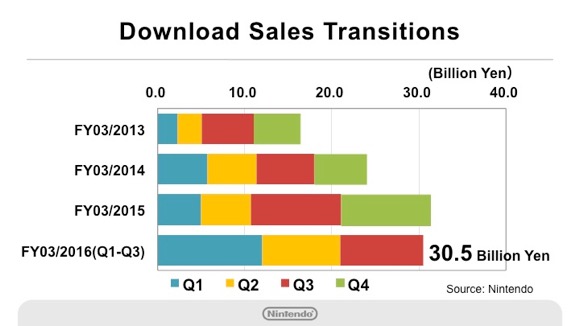 “We will continue to release attractive add-on content maximizing features of each software title since they help maintain software usage rate and keep the title at the center of conversation,” Nintendo chief executive Tatsumi Kimishima said in his presentation to investors.

Obviously, Nintendo doesn’t want to leave those consumers behind when it jumps to the NX. It’s done all this work to get them into the Wii U and 3DS fighter, and it plans to keep Smash at the “center of conversation.” And not having a way for people to play and spend money on Smash on NX wouldn’t make sense.

But Smash’s importance to Nintendo goes beyond driving digital revenue. The company has also announced plans to introduce its My Nintendo membership program in March. This is its new online service that will connect Nintendo games across 3DS, Wii U, smartphones, and NX.

“As we have previously discussed, we are aiming to further advance our ‘gaming population expansion’ strategy and aim to ‘grow the population who have access to Nintendo [properties],'” said Kimishima. “To achieve this goal, increasing the number of My Nintendo members will be one of tour most important missions.”

The company wants 100 million My Nintendo members worldwide as soon as possible. To accomplish this, it plans to release Miitomo — a social mobile app — next month. It will then release more apps throughout the rest of the year. But while that will get players into its My Nintendo program on mobile, the company needs to bring in players on the console-side of that equation — and Smash is likely a key piece to doing that.

Smash Bros. is making a lot of money through digital downloads for Nintendo, but the reason for this is because it has a massive audience that plays online regularly. Getting those players into My Nintendo is a key way to reach that 100 million milestone. And it’s also important because the publisher already knows that those people are willing to spend money and likely have their credit card information stored on Nintendo servers.

If the company can migrate the Smash audience to NX and into My Nintendo, it could have a strong foundation for both its new hardware business as well as its free-to-play mobile games. And that could all help the company get back to making big profits.