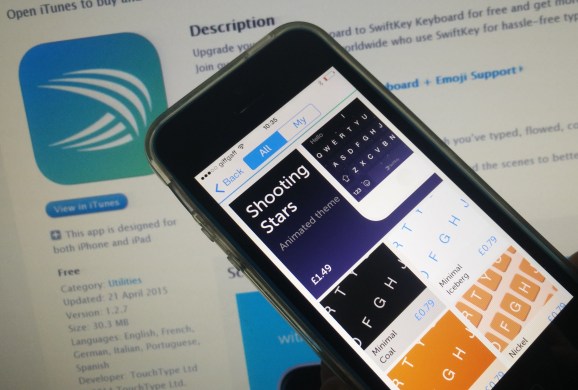 After a day of rumors, Microsoft has now confirmed that it has acquired SwiftKey, the London-based company behind the popular predictive keyboard app of the same name.

Terms of the deal were not disclosed, but according to a Financial Times report yesterday, Microsoft was looking to pay in the region of $250 million for the startup.

Founded in 2008, SwiftKey developed a solid reputation on Android as a replacement keyboard app for phones and tablets. To speed up typing, it learns your writing style over time and even predicts the next word before you’ve started typing it — this is partly based on historical patterns, but it also scans texts from other sources to “learn” popular sequences in which words are normally placed. SwiftKey finally launched for iOS in late 2014 after Apple opened up to third-party, system-wide keyboards.

Though SwiftKey is better known for its consumer keyboard app on Google Play and the App Store, the company also offers a software development kit (SDK) for third parties to integrate its language-learning technology into their own services. Indeed, SwiftKey carries out a lot of research internally, involving artificial intelligence, machine learning, and natural-language processing (NLP), and it’s this technology that Microsoft is acquiring — not a consumer app that makes relatively small amounts of money through in-app purchases.

SwiftKey’s backend has been employed in a number of interesting use-cases. Back in 2014, the company revealed it had been working with esteemed physicist and cosmologist Stephen Hawking, who suffers from a debilitating motor neuron disease (MND) that has left him almost entirely paralyzed, to help him communicate twice as quickly as with previously available methods. SwiftKey had been working behind the scenes for two years with Hawking to develop technology specifically for him.

And back in October, SwiftKey revealed it was working on a new experimental app that uses artificial neural networks (ANNs) to predict and correct language. ANNs are part of the broader field of machine learning and artificial intelligence. These are more closely aligned with the workings of the human brain, and, from SwiftKey’s perspective, should enable better predictions.

It’s also worth noting here that SwiftKey syncs what it learns from each user in the cloud, so the more platforms you use SwiftKey on, the smarter it gets. This cloud component was central to Microsoft’s interest in buying the company. Indeed, Microsoft has been pushing its cloud credentials, with CEO Satya Nadella announcing last June that creating “the intelligent cloud platform” is one of the company’s three key investment areas — and acquisitions have proven pivotal in realizing this shift in direction.

“In this cloud-first, mobile-first world, SwiftKey’s technology aligns with our vision for more personal computing experiences that anticipate our needs versus responding to our commands, and directly supports our ambition to reinvent productivity by leveraging the intelligent cloud,” explained Harry Shum, executive vice president of technology and research at Microsoft. “SwiftKey estimates that its users have saved nearly 10 trillion keystrokes, across 100 languages, saving more than 100,000 years in combined typing time. Those are impressive results for an app that launched initially on Android in 2010 and arrived on iOS less than two years ago.”

SwiftKey, as it stands, will be going nowhere. The app will continue to be developed for Android and iOS, but the underlying technology will begin to rear its head across Microsoft’s range of products. This will include Microsoft’s Word Flow keyboard, which recently appeared on iOS to much acclaim.

So while the SwiftKey acquisition is, to some degree, about “keyboard apps,” Microsoft wouldn’t have paid the reported $250 million if there wasn’t more to it. And with years of AI and machine-learning research in SwiftKey’s arsenal, it was only a matter of time before one of the big tech titans came calling. Prior to today’s news, my bet would have been Google, but Microsoft is certainly nothing to sneeze at.