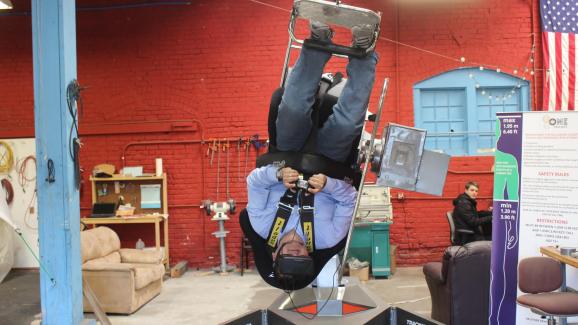 MMOne lets you play games like Ubisoft's Trackmania racing game in VR with a motion simulator.

Virtual reality can really turn your world upside-down. I learned that while spinning around upside-down in a giant simulator that is not for the faint of heart. The MMOne gaming chair mimics the motions that happen in a VR game and makes you feel every twist and turn in a physical way.

You can really feel it when you do things like fall off a cliff, drive along a side wall, and do a barrel roll in an aircraft. It represents the high end of what is possible in the virtual reality business, which is expected to hit about $30 billion by 2020, according to tech adviser Digi-Capital.

MMOne Company cofounder Alex Ryzhkin said in an interview with GamesBeat that the company wants to deliver the ultimate immersive and interactive experience to accompany VR headsets such as the Oculus Rift and the HTC Vive. I played Ubisoft’s Trackmania racing game as well as an aerial stunt flying game with the MMOne. It was an adrenaline rush, and it left me a little woozy when I was spinning upside down. 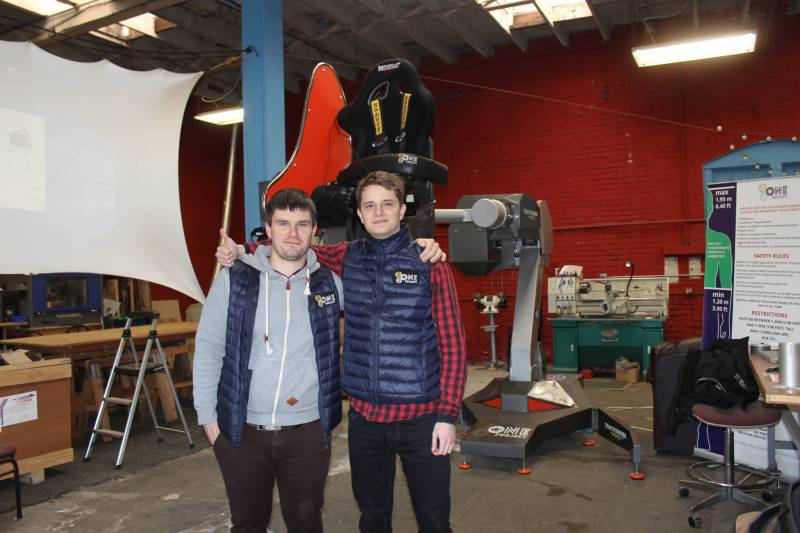 Above: Alex Ryzhkin and Constantine Belous of MMOne Company, maker of the MMOne.

Ryzhkin and his colleague, Constantine Belous, met me at their warehouse-like workshop in Redwood City, California. They’re housed inside Radicand, a hardware consultancy and coworking space. To try out the MMOne, I had to climb up a ladder, get on a platform, and get into the chair. Ryzhkin strapped me into the equivalent of a racing car’s seat. He put the game controller in my hands and started Trackmania in VR on a high-end PC.

The MMOne Company, based in Odessa, Ukraine, has created a wild virtual reality experience. Using about $50,000 worth of parts, the company has created a three-axis “gaming chair” that matches your movements you make in a game while wearing a VR headset.

The chair can rotate on three axes, going 45 degrees to the left and right, raising 45 degrees, and revolving 360 degrees. Belous said that the company did demos with Ubisoft at the Paris Games Show last fall. They showed Trackmania VR to more than 500 people at the event, and none of them got sick. 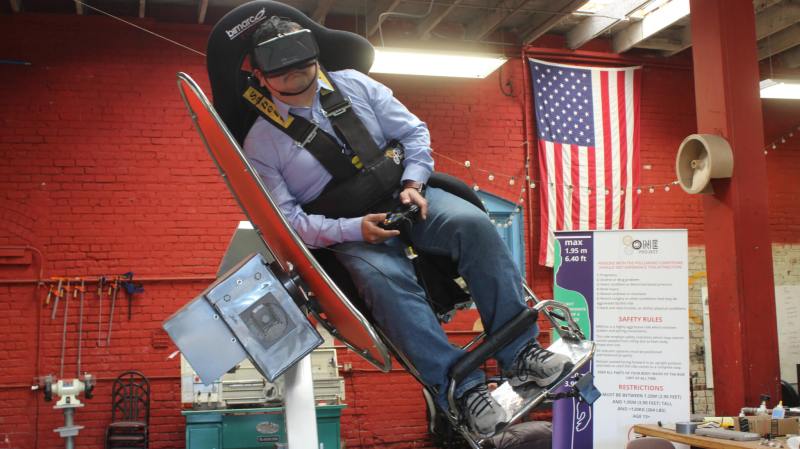 Above: Dean Takahashi of GamesBeat tries out the MMOne.

But I would guess that people who can get sick on roller coasters won’t have the stomach for this. It is really physical, and the movements can be really jolting. I saw it with a DK2 headset from Oculus VR, and that doesn’t give you perfect imagery or 1-to-1 movement. But it’s a good experience that should be able to work in a lot of games.

“We are thinking about Angry Birds, where you are in a slingshot,” Ryzhkin said.

Ryzhkin said the company is raising $5 million in funding. He hopes to make more than 50 machines so that they can do location-based entertainment at many different venues around the globe. A bunch of tech celebrities have been trying it out, like Oculus Rift inventor Palmer Luckey. They’ve made a few prototypes so far.

“It is great to see so many people in the VR hardware space trying different things,” Luckey told me.

Ryzhkin said he is aware of a lot of competition in the “motion platform” business, some who have a lot of money and experience. Because of the excitement over VR, we should expect more competitors to emerge.

His company is taking that into consideration as it moves quickly and specializes in its space. It is a complicated mechanical engineering and VR problem. It’s not easy to simulate the effects of falling, acceleration, deceleration, or spinning out of control. You might even wonder if you really should simulate that latter part, given that problem with roller coasters that I pointed out. 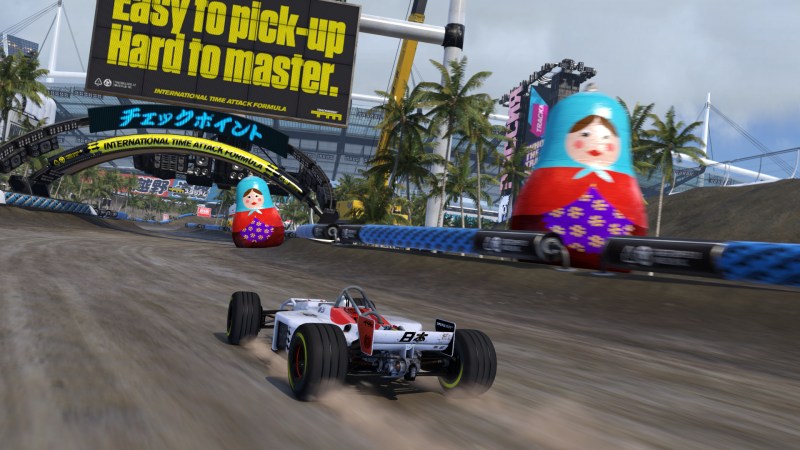 Above: Trackmania lets you drive up and down walls.

MMOne Company has offices in Odessa, Ukraine, and Redwood City, and it has eight employees. Darina Markova​ (its president), Andrew Borisov, and Ryzhkin started the company in 2012.

Ryzhkin has been showing a lot of demos of the technology. I could see it being popular in theme parks and other entertainment venues. Perhaps the closest competition is an actual maker of amusement park rides, the Kuka Coaster from Kuka Robot Group

Competitors include makers of aircraft simulators, but those can cost in the millions of dollars, and they aren’t necessarily as visceral as the VR experience with the MMOne, Ryzhkin said. The company plans to operate units that it can lease to various customers, who can operate it as a kind of entertainment ride.

“We want to put this in shopping malls all over the place,” Ryzhkin said. “It’s a new form of out-of-home entertainment.”