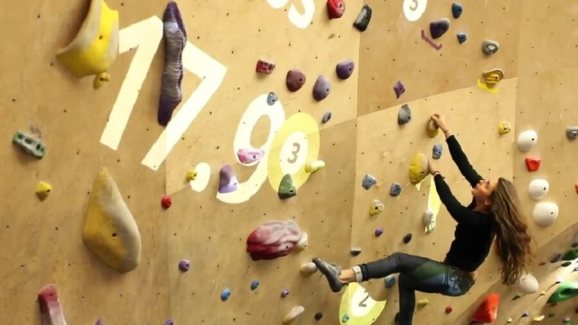 Everybody knows that gaming could be big on augmented reality (the process of adding computer-generated images to your actual view of the real world), but they haven’t really shown what would be fun. But a video made by Brooklyn Boulders and startup Randori shows how augmented reality could be used to make a timed game out of rock wall climbing.

The video below gives you a little taste of the future of augmented reality. Augmented reality glasses firm Magic Leap confirmed just yesterday that it has raised $793.5 million from Alibaba Group and other investors. And tech advisor Digi-Capital estimates that augmented reality will be a $90 billion market by 2020.

The Brooklyn Boulders gym company is working with Jon Cheng, creator of the Time Trial game and head of startup Randori, to implement the game in its gyms. In the game, you earn points as you scale up a rock climbing wall and touch the numbers that are lit up. The numbers make a sound and disappear after you touch them.

It takes a different kind of imagination to come up with augmented reality applications, as noted by Graeme Devine, chief creative officer at Magic Leap, speaking at our recent GamesBeat conference. After checking out this video, you may be inspired to create your own AR experience.