WhatsApp has released an update that increases the number of people you can have in a group chat. Before today, the messaging service limited you to 100 people, but now that has more than doubled to 256.

First noticed by NDtv, this update is available to both iOS and Android app users, but not other platforms like Windows and BlackBerry. You’ll first encounter a notice about the increased limit when you visit the chat section of the Facebook-owned app — a prompt will appear to inform you of the change. There’s no difference in how you create a group chat, except now you don’t have to stop when you hit 100 colleagues you want to talk to simultaneously. 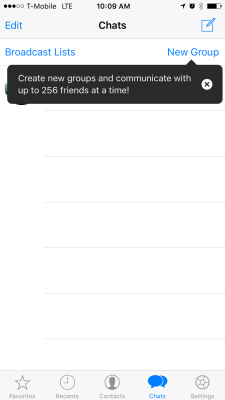 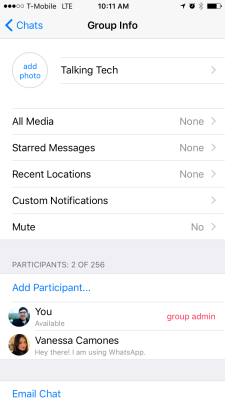 The move comes just days after WhatsApp announced it now had more than 1 billion monthly active users, and also after the company ended its $1 annual subscription plan.

Being able to add more people into group chats will likely be a benefit to WhatsApp’s growing number of groups currently in existence — over 1 billion. As it has become a popular place for chatting, limiting interest-based organization to 100 seems like a hindrance, but now that you can add more people, better discussions could take place.

Of course, another perspective is that when WhatsApp begins charging businesses to use the service, brands could leverage this increased limit to host focus groups, informal and virtual get-togethers, and more.