I’ve chalked up 2015 revenue for the PC and console games market in Iran to approximately $140 million, based on research firm Newzoo’s latest data, and project it to grow to $167 million this year. But the majority of this is hard to measure or accurately track because it lurks in gray and black markets due to decades of sanctions and the absence of official distribution channels.

Gameguise ran a triple-A gamer study this month to help us shed light on this murky landscape. Between January 25 and January 28, 743 respondents completed the survey on our channel on Line, the popular messaging app in Iran. They all qualified as owning a game console, while 70 percent of the sample, or 1,875 respondents, disqualified. Over 80 percent accessed the survey via a VPN partly due to the fact that the survey platform we’re using, Survey Gizmo, is blocked by some ISPs.

Iran’s most beloved console is the Xbox 360 (42 percent), and the PS4 (31 percent) has twice the market share as Xbox One (14 percent). Xbox 360 and PS3 will likely continue to thrive in the country for at least a few more years since the market supply consists mostly of super-cheap ripped-off copies that have been “localized.” Iranians are paying up to just a few bucks for a title that would otherwise cost them 15-20 times more. Many stores nonchalantly showcase copies and originals side-by-side on their racks. 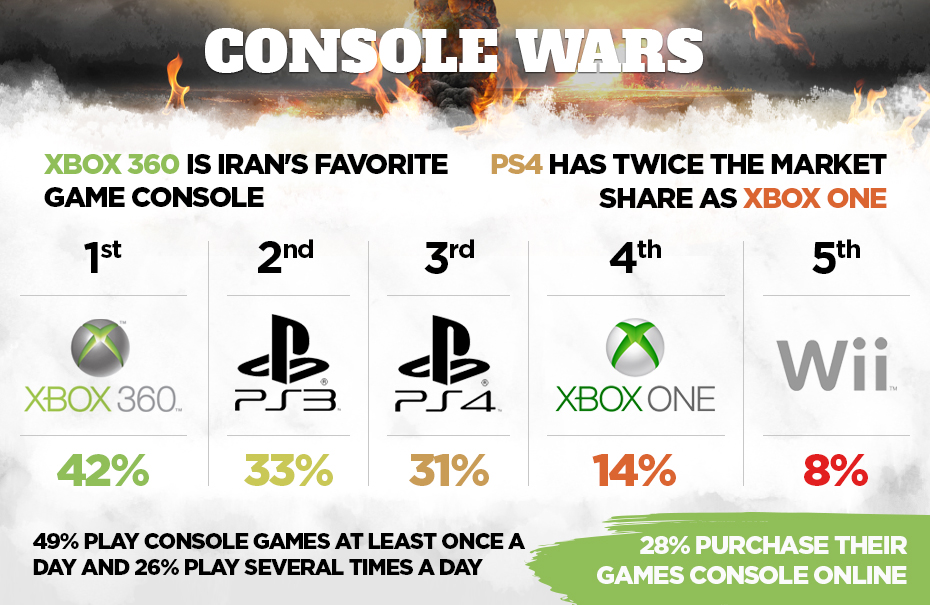 The situation becomes worse by how the gaming authority in Iran, Bonyad, and its rating agency, ESRA, are endorsing and profiting from the illegitimate trade. In fact their stamp, located at the bottom-left of the packaging, is in many cases tantamount to labeling the foreign console or PC game that is sitting there on the shelf a “copy.”

The eighth generation of consoles, however, has proven uncrackable, so customers have no choice but to pay the substantially higher costs. PS4 ownership is remarkably high, reflecting the willingness of Iranian gamers to access the best regardless of cost. With the country now opening up, it’ll behoove the government to have Bonyad stop participating in the illegitimate trade of ripped-off copies and so help pave the way for cleaner market conditions that will attract official distributors to enter.

Sixty-two percent of gamers purchase their consoles and games, original or copy, from shops in Iran. A wide variety of the stores exist at Iranian tech bazaars, most of which thank their existence to the absence of the official distributors who have been barred from entering for decades. Online, however, is rapidly growing in popularity, with 27 percent opting in to order from the likes of Digikala, a top e-commerce site for all things tech. Digikala only sells originals of console games but does apparently sell copies of PC games. 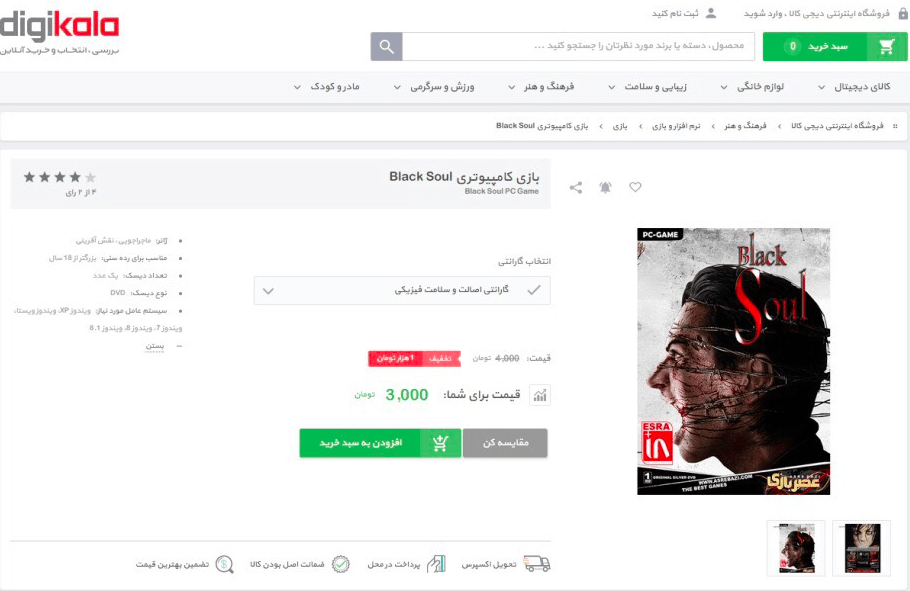 Console gamers really put in the hours in Iran, likely because more than a few are either students (27 percent) or unemployed (17 percent). Forty-nine percent play at least once a day, and 26 percent play several times a day. Fifty-four percent play for at least one hour a day, 22 percent for three hours or more, and 5 percent for over five hours. Action & adventure games (47 percent) consumes most of that time, with sports (21 percent, with EA’s FIFA Soccer being No. 1) following and the remaining genres lag well behind, all below the double-digital threshold.

Online gaming on consoles is thriving, which is surprising given that affordable bandwidth packages offered by ISPs are often too slow to be able to connect firmly to Xbox and PlayStation networks without experiencing lag and continual disconnections. Indeed, 58 percent indicate that they experience connection disruptions, of which one-third state it is a frequent bane to their existence.

Regardless, 27 percent are playing online at least once a day, and 15 percent are playing several times a day. A further 30 percent are paying for in-game features or services. On a monthly basis, two-thirds purchase less than $30 and 21 percent between $30 to $85. The whale groups are present in above average proportions with 4 percent stating they pay between $85 to $142 per month and 3 percent are even paying more than $285. 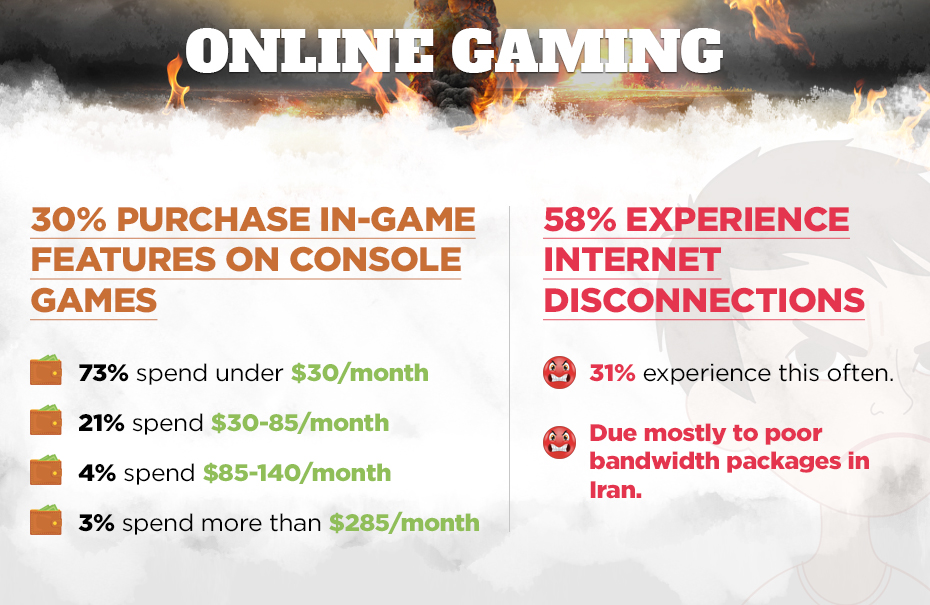 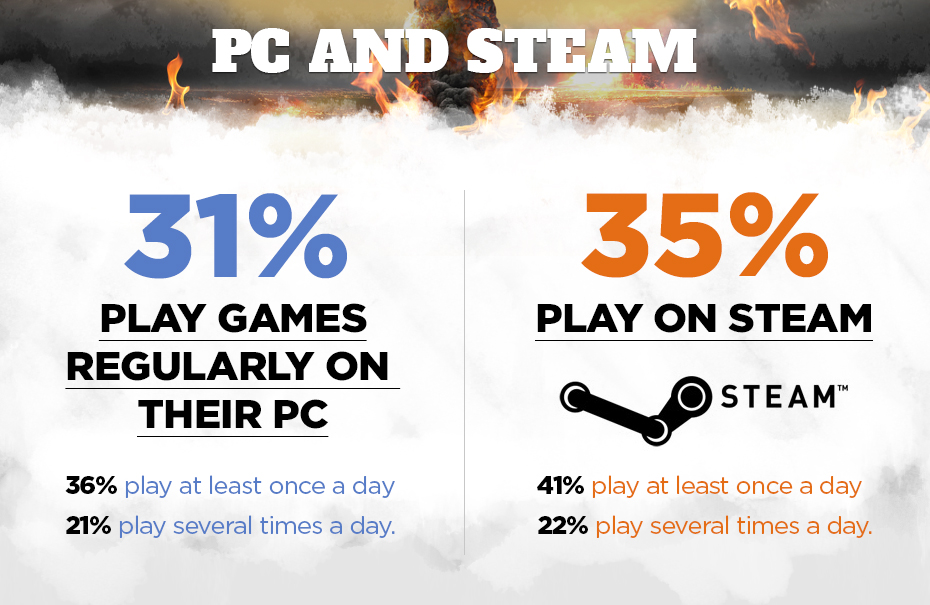 Stay tuned as I dig deeper into the world of this hardcore Steam community in Iran.