Today is Super Bowl 50, and about 120 million people are expected to watch the Denver Broncos square off against the Carolina Panthers. That’s one-third of all Americans, many of whom have never played pigskin, watching one professional football game. And yet there’s another sport that in just a few years has become played by nearly every child in America: video games.

This sport’s version of the Super Bowl, the World Championships for League of Legends held last year, drew 36 million viewers worldwide. It’s an audience number that’s sure to increase dramatically in the years ahead. While this growth is encouraging for esports as an industry — it hit $748 million last year — it also reveals some of the problems pro gamers share with their NFL brethren.

Esports is the name given competitive pro gaming, where players earn salaries from professional teams and compete in tournaments against others from across the globe. The events are streamed live on Twitch and now YouTube gaming, and will soon become a billion-dollar industry 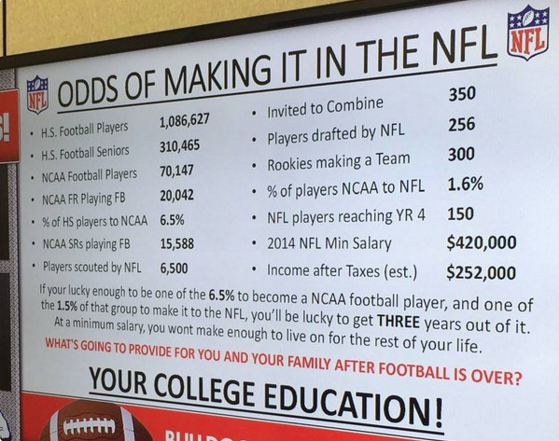 Above: The long odds of making to the NFL

For starters, prospective players face the long odds of going from amateur to professional. “If you look at it from purely a ‘how to become a pro’ in the respective sports, then the NFL is clearly much, much harder,” says Dennis Fong, a pioneering pro gamer of Quake and Doom fame. “In esports, you can go from playing in your PJs at home one day to being a pro the next day. In the NFL, you have go through an entire system from Pop Warner [that’s Little League for football] to high school to college to the NFL and have the right things at the right time fall into place to even be discovered.”

According to a 2013 NCAA report, about 1 million kids are playing high school football each year, with about 20,000 of them making a college team. The NFL drafts just 250 of them. Put another away, as a high school senior in New Orleans, Denver Broncos quarterback Peyton Manning who will play in Super Bowl 50 today had just a 0.08 percent chance of making it to the pros. Long odds, right? Not so different compared to the odds faced by those seeking to become a pro gamer.

The 2014 U.S. Census reported an estimated 73.6 million children under the age of 18, and nearly every research firm pegs video game use in the 90 percent or greater range for this age group. After my own back-of-the envelope calculation for age distribution, the U.S. has approximately 18 million high school gamers, compared to the 1 million high school football players estimated by the NCAA.

Unlike the NFL with its finite number of open draft slots each year, estimates for the number of active professionals are difficult to find. Pro gamers in the U.S. can include those drawing esports team salaries, competing in professional tournaments, earning money as game livestreamers (itself a lucrative industry at $3.8 billion in 2015), or perhaps being paid as a marketer or via sponsorship. And prospective pros have many games and platforms to choose from. Still, it’s a player base of millions of amateurs compared to professional positions that number in the thousands, or perhaps tens of thousands at most. “For example, League of Legends has approximately 70 million monthly active players but less than a thousand pro players,” says Fong.

The risk of injury

But long odds of attaining professional status are not all that pro gamers share with the NFL. While spared the dangers of concussions or other physical trauma, the possibility of injury is real. “The most common career-ending injury for pro gamers is repetitive stress,” Fong says and explains that he still suffers from it. “Sitting at a computer all day is generally not the best thing for one’s posture and unfortunately, it’s not generally something you think a lot about at a young age until the pain creeps in; and at that point, it’s too late.”

Both professions favor youth, and longevity is often short-lived. The typical NFL careers is just 3.3 years. Fong’s professional career began when he was 16 years old and lasted only five years. “Considering the physical demands made by practicing 10 hours a day, most competitive gamers skew young, between 18 and 25 years old,” says Joost van Dreunen, the CEO of media and games consultancy SuperData Research. A pro gamer’s career is “surprisingly short, as most players cycle out in their mid-20s.”

Show us the money

While the average salary for an NFL player was $1.9 million as of 2013, pro gamers earn considerably less. Top pro gamer Marcus “Dyrus” Hill retired last year at age 23 after winning $148,642 over a five-year career, according to E-sports Earnings. One Hearthstone streamer, ‘Amaz,’ who is also a pro player, gathered enough sponsorship money for his team to organize a $240,000 prize pool for a fun team series this summer, something unprecedented in pro Hearthstone.

“Most players are on a salary and receive a percentage of winnings, and few earn impressive salaries. Of course for an 18-year old to make $100,000 annually is a huge amount of money, but the real money for professional gamers seems to be in first becoming a celebrity player and then setting up a livestreaming business where they can directly monetize their viewers,” says van Dreunen.

Fong, who in the 1990s was at the top of his profession, earned about $100,000 annually from sponsorships, endorsements and winnings before becoming a successful serial entrepreneur. Fong today is CEO of Raptr, which offers the Plays.tv video-sharing platform for gamers. 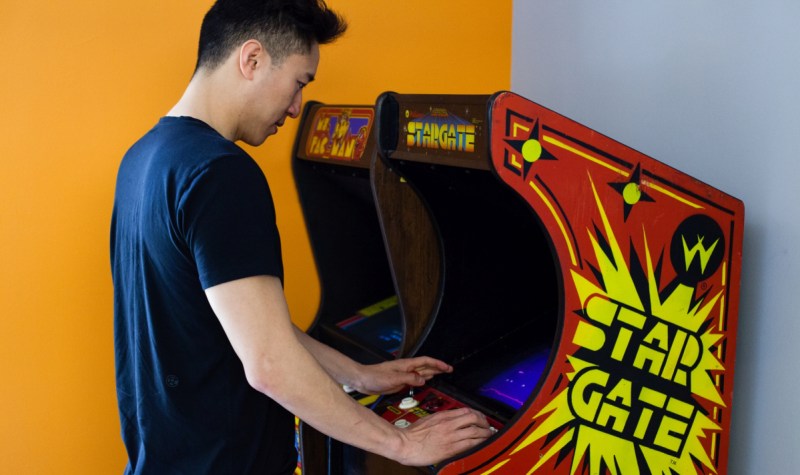 Above: Dennis Fong was the first to make himself a star in the 1990s world of competitive gaming scene.

Unlike football, the world of professional video games should offer a level playing field for women. First, physical size means little. Manning stands 6-feet-5 and weighs 230 pounds, but that’s meaningless for success at pro gaming. Second, nearly equal numbers of young boys and girls form the amateur pool from which professionals are drawn. And within the adult population, twice as many women play games as men, according to the Entertainment Software Association, the trade group for the video game industry.

“Clearly, having faster twitch reflexes and reaction times helps, but the beauty of esports is that it isn’t defined by your genes. Esports is gender-agnostic; there are no geographic limitations and no physical attributes that are truly required to be successful,” says Fong.

Currently, just 5 percent to 10 percent of pro gamers are women, estimates van Dreunen. “That will change,“ he predicts, “as video games have become a mainstream form of entertainment, forcing game companies to appeal to a wider, more diverse audience.”

Esports also holds the promise of equal pay between the sexes. For instance, top pro gamer Katherine “Mystik” Gunn had $122,000 in winnings over three years according to E-sports Earnings. More women players winning more prize money is inevitable. “In time, we will see the percentage and presentation of female pro gamers improve, but it’s still early days,” says van Dreunen.

How big is big?

Even as revenues of professional games market reached $748 million last year and are predicted to reach $1.9 billion by 2018, the NFL with its multi-billions of dollars and it’s Super Bowl Sunday are the biggest game in America. By comparison, van Dreunen says that “esports is still in its ‘leather helmets’ stage.’”

But unlike the NFL which appeals largely to American audiences, pro gaming is a phenomenon with international teams playing for global audiences. According to van Dreunen, “It makes more sense to compare esports to the FIFA World Cup to get a sense of scale, as soccer has worldwide appeal. And their world championship final drew one billion viewers.”