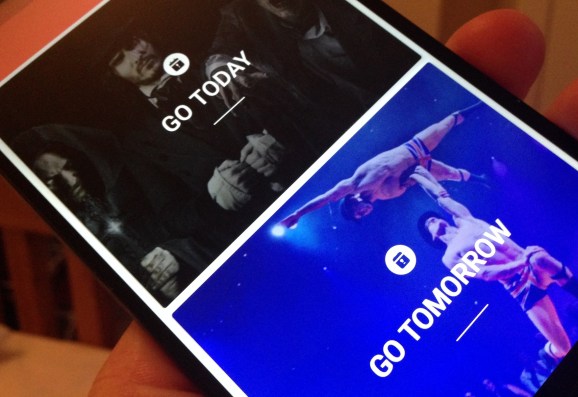 YPlan is the latest tech company to announce layoffs, as the London-based startup reveals that it’s cutting its headcount by 30 percent globally. The move will impact employees in the U.S. and U.K., where 22 employees from across a number of departments will lose their jobs.

“As a startup, we are reliant on an exceptional team to drive our business forward,” said Rytis Vitkauskas, CEO and cofounder of YPlan, in a letter seen by VentureBeat. “As we continue to evolve our proposition, it is crucial that we now streamline our operations and align the right teams to the focus areas where we see the best opportunities to maximize the company’s growth.”

Though YPlan is reducing its headcount across the board, it’s ultimately seeking to double down on growing its business in the U.K. and Ireland.

Founded out of London in November 2012, before landing in New York in 2013 and San Francisco six months later, YPlan lets you browse local events by date, then narrow down by type (e.g. “Film” or “Music”), and book directly through the app. The simple, streamlined proposition led it to become one of the top “things to do” apps in London, and it has raised $40 million to date, including a $12 million round in 2013 that saw actor Ashton Kutcher enter the fray.

YPlan may be ditching almost a third of its employees, but the fact that it’s specifically “reducing” its presence in New York and San Francisco suggests that the company has struggled to replicate its London success on the other side of the pond. VentureBeat has sought to clarify whether this means that YPlan is pulling out from the U.S. completely, but it seems that this is not the case — for now, at least. “YPlan will be reducing its staff overhead in those cities but will continue to sell tickets there with our partners for the foreseeable future,” a spokesperson told us.

The fact that YPlan is continuing to operate “for the foreseeable future” in the U.S. suggests that the company has existing commitments in place that it must fulfill, but given that the focus of the company’s “streamlining” is entirely in the U.S. certainly indicates that it may ultimately seek to exit the market entirely.

YPlan is the latest in a line of tech companies that have sought to “streamline” or “restructure” their operations. Just last week, Autodesk announced it was losing 10 percent of its workforce, or 925 employees. The previous month, Mixpanel announced it was getting rid of 20 employees — a move it explained by saying that it had “overhired.” Then there’s more established tech titans such as Twitter, which has also been shedding employees of late.

Though it’s never good to see startups that should be on an upwards trajectory scaling things back, ultimately this is about surviving in the long term. Vitkauskas was quick to point to various growth stats as proof the company is doing well. “Last year, YPlan’s sales grew again over 100% for the third consecutive year, while this January is up over 3x compared to last year,” he said.

“YPlan is now a more efficient and focused business, positioned even better for continued growth,” he added. “Our unique, discovery driven entertainment-on-tap marketplace continues to scale rapidly and organically.”

In an interview with VentureBeat last year, Vitkauskas said he was setting out to build a $1 billion business. He also suggested the company could embark on a series of national launches, which would be a departure from its strategy so far involving city-by-city launches. Today’s news is a major hiccup in YPlan’s quest to become a $1 billion business, but it doesn’t necessarily mean it won’t look to expand elsewhere. Outside the U.S., the app is only available in London, Bristol, and Dublin, so there is plenty of scope to grow in its existing markets, plus we’re told that it’s still “evaluating other geographical expansion opportunities.”