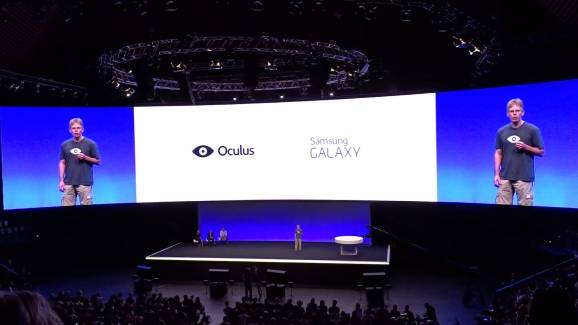 Mobile VR could quickly catch up to Rift and Vive with position tracking.

Oculus VR has one of its biggest brains working on a feature that could make mobile virtual reality even more impressive than its Rift headset or HTC’s Vive.

John Carmack, the chief technology officer at Oculus, revealed in a tweet today that he is spending the majority of his time working on the problem of positional tracking for Samsung’s Gear VR device. This would enable the Gear VR, a visor that goes over your eyes and holds a Samsung Galaxy phone, to tell where you are in the world and when you are moving around. Developers could use this tech to put you in simulations that you can walk around inside of freely and without wires hanging off your body and connected to a PC. This is important because today’s Gear VR can only tell when your head turns or a single axis. When the head-mounted display doesn’t move with your body, it can lead to motion sickness and other problems. This could also open developers up to both the VR and AR markets on a single device.

With tech adviser Digi-Capital predicting that the virtual and augmented reality markets could grow to $120 billion in revenue by 2020, Oculus and Samsung could jump out to an enormous early lead if it is able to introduce position tracking in the relatively inexpensive Gear VR (only $99 if you already own a compatible Galaxy device).

Position tracking’s potential is an enormous for virtual reality. The room-scale positional tracking that is in the HTC Vive head-mounted display is one of the reasons we’re looking forward to it. Vive games enable you to walk around inside virtual kitchens in games like Job Simulator and Budget Cuts. These experiences have blown us away over and over in the past, but introducing something similar into a mobile VR solution could impress us even more.

@vessenes I still think it is important, but with most of my time on position tracking for GearVR, I haven't touched it in months.

This is not the first time that Carmack has mentioned positional tracking. Way back in December 2014, the developer — who is an industry veteran responsible for games like Quake — talked about the technology on Twitter.

“I am working on inside-out position tracking,” he told a fan. “But everyone is skeptical that it will work out, so don’t hold your breath.”

Inside-out tracking refers to the idea that the Gear VR and its smartphone core can use its sensors to accurately and immediately track where you are in 3D space. For comparison, the HTC Vive requires you to set up two towers in a designated play space to give the headset enough information to understand your movements.

If Gear VR could do the same thing without forcing you to play in a specific space and without wires, it could make it so that you could go into VR anywhere. Additionally, Samsung and Oculus could begin introducing augmented reality features into the Gear VR by patching a live feed through the camera on the back of every Galaxy phone. This would enable software that could mix the real world with digital overlays. This is what Microsoft is trying to do with its HoloLens and what Magic Leap is doing with its device, but — if Oculus and Samsung figure out positional tracking — it could have a device that is well-suited to both VR and AR.