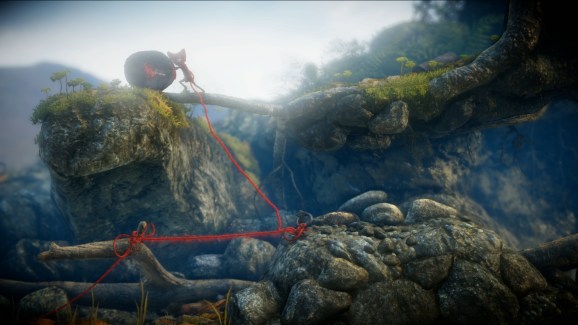 Unravel's visuals come together thanks to its unique art design and lifelike animation.

Electronic Arts is not known for dealing in cute. Professional football, military shooters, and Star Wars? Now, that’s EA. But a tiny little creature made of yarn may change that perception.

Unravel is a new puzzle platformer from developer ColdWood Interactive. It stars a character named Yarny, who is the physical manifestation of the broken bonds between an aging woman and her estranged family. As Yarny, it is up to you to tie together the woman’s memories in an effort to bring her back together with the people she loves. This involves lots of jumping and using your yarn to solve challenges in your environment.

A quick glimpse at the game will instantly confirm that all of this is as adorable as it sounds, but is it fun and does it deliver emotionally? I think so.

The Swedish setting is striking

While Yarny is the star of the game, I think that ColdWood Interactive’s home country of Sweden should get co-billing. Northern Europe is not something we often see in games, and Unravel makes an excellent argument for why we should see more of it.

Running around a yard or through the woods is instantly enchanting because Yarny’s tiny scale makes the familiar surroundings feel magical. But that feeling persists because ColdWood isn’t just throwing a generic version of “the beach” at you for the level that takes you to the sea. You don’t stumble across brightly colored towels and beach balls as if you were at Beach City, U.S.A. Instead, this scene is shot through the prism of flinty cold Sweden. It makes Unravel’s world feel more personal.

This shows the developer is confident enough in its art that it doesn’t need to use common shorthands (like snow means it is cold) to get its intentions across. Instead, you get the stillness of winter air and cracked, dry ground. You’ll climb up long-dead trees and walk over dead leaves that you can tell by their brown color fell weeks ago.

This European realism lasts throughout the game. I was a bit stunned later on when I could tell a level was freezing cold even though the ground wasn’t covered in snow. In other games — especially platformers — a developer would just give you a snow level. A cold level always equals a snow level. But in Unravel, ColdWood — coming from a place that has all kinds of variety of chilly weather — isn’t afraid to portray that in different ways.

The photorealistic visuals, combined with ColdWood’s willingness to show a more nuanced idea of what the world can look like, make every level feel like a real place.

Yarny is a character worth loving. He’s small but brave. He’s cute but capable. And ColdWood gets all of the emotions of the character across through smart animations.

Early on, Yarny comes across a few butterflies. Without any input from the player, the game has our little hero stumble while trying to grab the insects. These sorts of moments occur again. Yarny shivers when he is freezing. He holds his arms out when he balances on moving objects.

All of these subtle actions remind you that even though you’re in control of Yarny, he still has some feelings of his own. This effectively shows that he is the connection between you and the game in the same way that he is the bond between the woman and her memories and family. He lives in the space between all of this, and ColdWood knows that bringing him to life is an important way to help bridge the gap.

And when I reached the story’s climax, I was deeply affected by it because I had grown so attached to my yarn friend.

The puzzles are a decent challenge

The world is beautiful, and the puzzles that populate this environment are often a pleasure to solve.

Every challenge revolves around Yarny’s basic capabilities. These include his ability to lasso certain elements of the world with his yarn. From here, the hero can swing from and climb up objects. You can even push and pull objects around. This means you’ll have to do a lot of manipulating platforms to proceed.

A great example of this is the Mountain Trek level, where you spend most of your time evading an angry chipmunk. During my epic battle with this adorable creature, who wanted to rip my poor Yarny apart, I had to lure him toward a mushroom to break it. I could then tie my yarn between two areas to make a trampoline. After swinging like Indiana Jones to get to the other side of the chipmunk’s cave, I had to use some poisonous fungi to ward off the animal so that I could lasso the boat behind him. I dragged the toy boat into the water and then lassoed onto a fish, who helped me get to the other side of the stream.

None of this is especially difficult, but it’s still fun to look at the world and understand what it wants from you.

The controls are occasionally confusing and frustrating

Unravel isn’t without its problems. One of the early levels has a swarm of mosquitoes continuously assaulting Yarny. This makes it difficult to move and jump, and it had me trying to rip apart my controller.

Another example of frustration is a challenge near the end of the game where you need to drag a lantern up a snowy hill in the wind. If you don’t anchor yourself and the lantern to several checkpoints, you’ll get blown all the way back to the base of the incline. The problem is that Unravel wants you to connect the yarn to the hooks and to the lantern and to yourself in a very specific order. After getting blown back to the start for my tenth time, I cursed the game for not providing me with better instruction on how this was supposed to work.

And I think that’s where most people will find a problem with Unravel. The yarn is fun and dynamic, but it is also finicky and unforgiving.

ColdWood has succeeded in a handful of bold ways with Unravel. It is showing EA the value in smaller, quieter games. It also feels like another fresh take on the side-scrolling platformer. And while Unravel drove me mad a couple of times, I was mostly thrilled by its wonder and adventure.

Publisher Electronic Arts provided GamesBeat with a download code for this game for the purposes of our review. Unravel is due out February 9 for PlayStation 4, Xbox One, PC.