Avast is crowdsourcing data from its millions of users around the world to serve a new mobile app that tells you where the best and most reliable nearby Wi-Fi is. 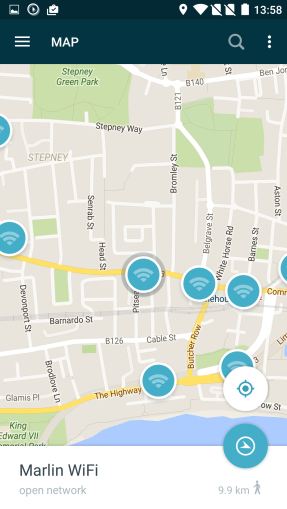 With Avast Wi-Fi Finder — available for Android and iOS — users can see what Wi-Fi hotspots are near, and which ones are most secure and recommended by other users. You can also compare networks for speed and look at the security ratings, as verified by Avast users.

The app is the result of a crowdsourcing initiative that kicked off back in August, when Avast tapped its existing pool of Avast Mobile Security users — up to 230 million people, though Avast doesn’t specify how many proactively participated — to collect additional data relating to public Wi-Fi hotspots.

An Avast spokesperson told VentureBeat that it now has 1 million hotspots in its database globally, including 120,000 in the U.S. It’s adding around 5,000 new hotspots each day.

Avast isn’t the first company to crowdsource Wi-Fi hotspot data — OpenSignal launched a similar initiative last year, while incumbents such as WiFi Map for iPhone have been around for a while. However, as noted already, what Avast has in its arsenal is a large community of users — and for crowdsourcing to be effective, it needs lots of people to participate.

Founded out of Prague in 1988, Avast has emerged as one of the leading online security companies, and is thought to control more than a fifth of the global antivirus software market. By reappropriating its existing technology and user base, Avast can access a potentially extensive network of foot soldiers willing to rate the world’s public Wi-Fi networks for the benefit of others.

“Many of us have found ourselves in situations when traveling or working remotely in which we’re unable to find reliable and secure Wi-Fi,” said Gagan Singh, president of mobile at Avast. “With the Avast Wi-Fi Finder, consumers are now able to find a safe and fast Wi-Fi connection whether you’re at the gym, hotel, airport, bus station, library or café.”

The Avast Wi-Fi Finder app has been available since December, but Avast is evidently now confident enough of its product to officially announce it to the world.