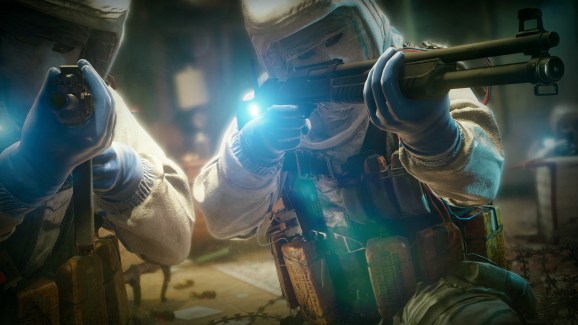 Rainbox Six: Siege continues to sell, and now you have a chance to check it out for yourself.

Gamers didn’t have a lot of new releases to pick up from retailers last month, and that dragged the industry down a little bit.

Consumers spent $605.2 million on new gaming products at United States retailers in January, according to industry-intelligence firm The NPD Group. That is down 4 percent from $627.6 million last year during the same period. Hardware and software sales were down. While, once again, the plummeting sales of the Xbox 360 and PlayStation 3 are the biggest culprits, the PlayStation 4 and Xbox One purchases also saw some regression.

Video game hardware sales were $157 million for January. That was down 15 percent from $185.4 million last year.

Those price cuts came in conjunction with an 81 percent dropoff in sales for Xbox 360, PS3, and Wii as well as 21 percent decline in sales for 3DS and PlayStation Vita.

As always, we like to point out that NPD’s numbers are only for new games and consoles sold at U.S. retailers. That means these figures do not reflect the performance of used games, digital games (such as those you buy from Valve’s Steam store or Xbox Live), or mobile. With that in mind, it’s best to take a look at these figures and use them as a small windows into a much larger and more dynamic market.

With that out of the way, let’s do the game chart.

The first thing this chart reveals is that triple-A publishers — those that make the biggest blockbuster games like Call of Duty or Assassin’s Creed — took January off. The only new game on this list is Lego: Marvel Avengers. That game cracked the top 10, but it is also notable because it is one of the first times that a franchise primarily aimed at children sold better on PlayStation 4 than the Xbox One in its first month of release (you can tell which console had the better sales by the order of the platform in the parenthesis). It’s possible that is just about the Marvel brand, or maybe Sony has shifted from the hardcore to the console of choice for everyone in the family.

Last year, we got a surprising hit in Dying Light in January, and 2016’s first month had nothing like that. NPD points out that Dying Light had 239 percent more unit sales than Lego Marvel Avengers.

Besides Lego, we’ve seen everything else on this list since at least December. Call of Duty: Black Ops III shows that Activision’s military shooter series really is as strong as ever. And Grand Theft Auto V continues to sell forever.

“This is the third consecutive January where Grand Theft Auto V was a Top 5 title,” said Callahan. “Astonishingly, the game has moved up in ranking placement from fifth place in January 2014, to third in January 2015 and to the second-best selling game in January 2016.”

But those games that launched in the quarter of 2015 look a little weak as well.

“This month’s new physical software decline also stemmed from softness from the performance of Q4 launches in January, which were down 19 percent from last year’s Q4 launches,” said Callahan.

One of the other more interesting aspects of this month’s chart is that if a system had a bundle for a game, it sold better on the competitor’s hardware at retail. For example, Black Ops III is bundled with PS4s, but it sold better on Xbox One. Fallout 4, which is bundled with Xbox One, but sold better on PS4. The same is true for Star Wars: Battlefront, Madden NFL 16, and FIFA 16. This is likely because bundled software is not included in this list.

The only exception to this rule is Tom Clancy’s Rainbow Six: Siege, which has an Xbox One bundle but also sold better on Xbox One at retail than PlayStation 4. This is further proof that Microsoft is still generating a ton of spending from its gamers for companies like Ubisoft even if the world has way more PlayStation 4 gamers.

Sony did point out that the PlayStation 4 was No. 1 for software sales in January.

Finally, when ranking games per SKU — meaning that you don’t compile a games sales numbers together from different platforms — Mario & Luigi: Paper Jam for the 3DS ranked No. 10 on the sales chart.

The PlayStation 4 outsold the Xbox One and Wii U in January, according to Sony.

“Thanks to our fans and partners for making PlayStation 4 the top-selling platform and software sales leader in January, according to NPD,” a Sony spokesperson said in a statement provided to GamesBeat. “PS4 also saw impressive year-over-year growth in both hardware and software sales. We appreciate the support and will continue to deliver on our promise to bring the best entertainment experiences to gamers.”

We’ve asked Microsoft and Nintendo for an update on how their hardware performed as well. We’ll update this story once we get a comment from each of those companies.

But NPD points out that the industry has essentially completed the transition from last gen to the current gen. So Microsoft, Nintendo, and Sony shouldn’t count on sales from Xbox 360 or PlayStation 3.