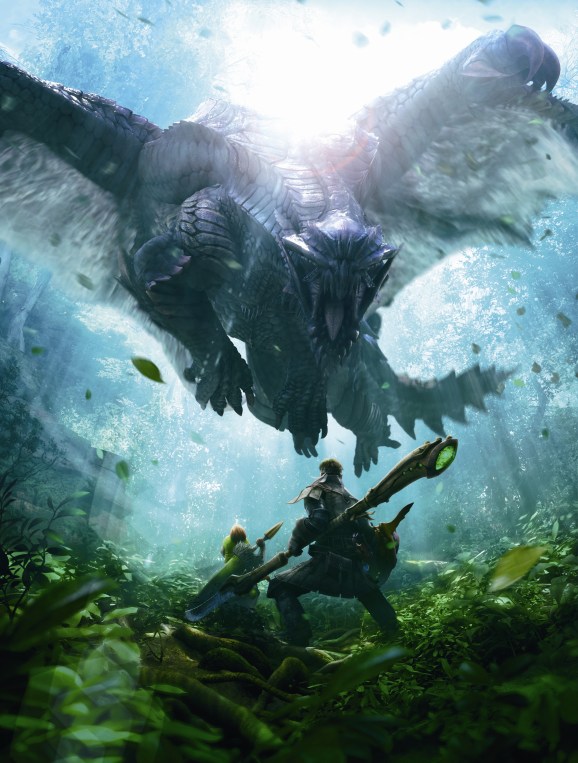 Monster Hunter hasn’t always been a success in the United States.

Worldwide, it’s another story. Capcom’s Monster Hunter series has sold 35 million copies worldwide as of December, making it bigger sales-wise than Mega Man and just shy of Street Fighter, two of the publisher’s best-selling video game franchises. It has long been a success in the company’s homeland of Japan. The most recent entry in the series, Monster Hunter X, sold over 3.2 million copies between its release in Japan on November 28 and the end of the year.

But success in one region doesn’t always carry over to other regions. Monster Hunter 4 Ultimate, which released one year ago today in the West, is the fastest selling Monster Hunter game outside of Japan. Capcom shipped 1 million copies to retailers within two months of its release, making MH4U the first title to pass the one million sales milestone in the Americas and Europe, and finally giving the action-role-playing series solid footing in those territories. But it’s taken a few releases in the series, and a lot of localization effort, to get there.

“This made the middle of our development a bit busier than usual because we had to take care of updates for the Japanese version while still working on new content,” Monster Hunter localization director Andrew Alfonso said in an email interview with GamesBeat. 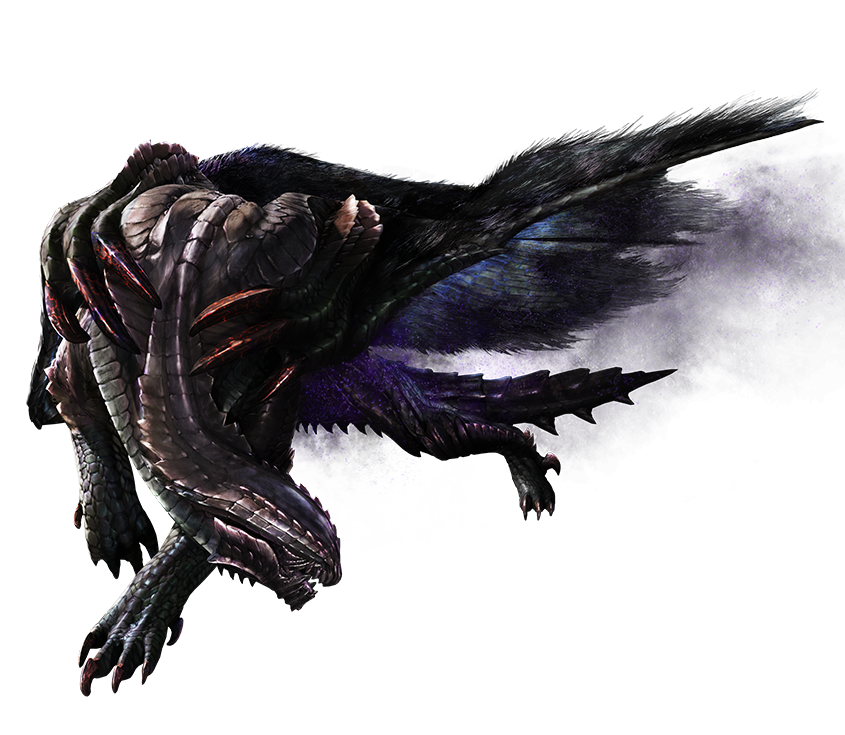 Above: The Gore Magala was the flagship monster for MH4U.

Unlike the prior entry in the series (Monster Hunter 3 Ultimate for for the Wii U and 3DS on March 19, 2013 in North America) where the team focused just on localization, they also had another goal this time around: make MH4U friendlier for beginners. The team emphasized the setting and story, and made tweaks to the UI and game progression.

They also included more tutorials to help players, as well as in-game reminders for some specific requirements — such as using Cool or Hot Drinks, which players can use to survive extremely hot or cold environments. They also employed icons to help in areas where they couldn’t expand text menus.

“For example, the Japanese word for ‘fire’ is only one letter, but in English it’s four, and we couldn’t change the font size to accommodate the translation without impacting readability, so we switched it to an easy-to-understand icon,” game director Kaname Fujioka said in an email interview with GamesBeat. 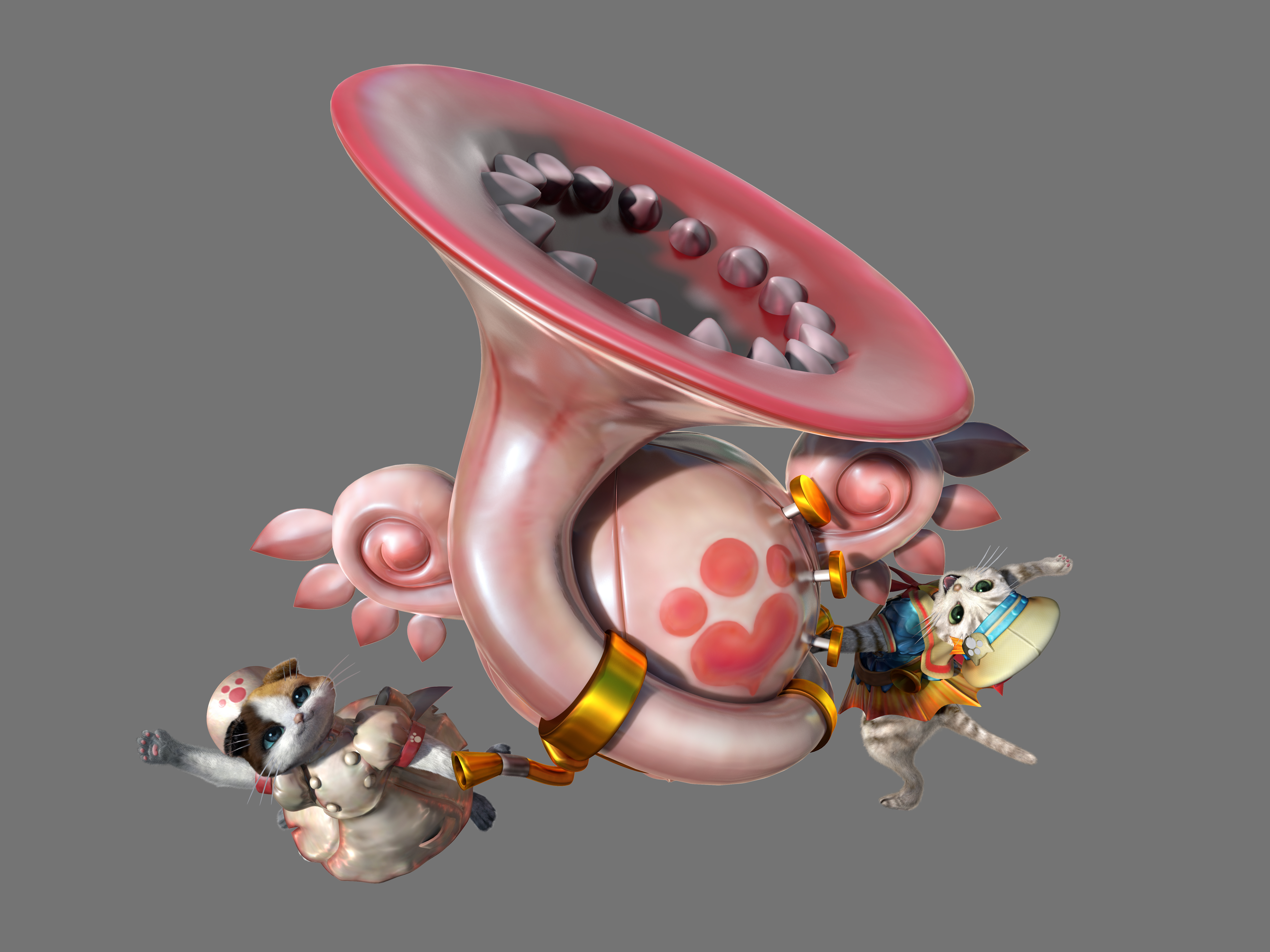 Above: Palico are hunting companions that will fight alongside you…and can also be dressed up and given their own armor and weapons.

Other changes to 4U including making the Palicoes — the cute cats that help out the hunters in-game — stronger as they fight with you, as well as adding in extra dialogue about the different types of armor you can forge. The team added preset Item Set loadouts to introduce and supply players with necessary quest items, and it also cut out confirmation questions that impacted pacing. For Europe, the team added a language select option to the main menu for easier switching between the continent’s multiple languages.

“When we were localizing the game, we wanted to help out beginners more, as well as make the game easier to get into right from the beginning,” Fujioka said. “We wanted to make the most intuitive Monster Hunter title that we could, so we reviewed the action portions and game progress, and planned more intuitive tutorials to help player progression.”

The team also reduced the amount of text that players have to read — they didn’t cut content, instead replacing it with “shorter, more impactful” dialogue.

Aside from giant monsters, dialogue is one thing that Monster Hunter games have in monstrous amounts.

“I can’t give out hard numbers, but the amount of NPC dialogue is in the neighborhood of a typical Ace Attorney game, and more than Dragon’s Dogma [a role-playing game],” Alfonso said. “Then you have more text for things related to save data, online features, etc., and even more text related to non-retail releases like the eShop demos and instruction manuals. It’s easily the biggest game that Capcom has localized.”

Monster Hunter 3 Ultimate’s localization staff had one English translator and editor, and the internal staff doubled for MH4U. If you include outsourcing partners and European translators, Capcom had nearly 30 people working on the localization. Even with the added staff, it took over a year to finish the localization, once quality assurance time was factored in. 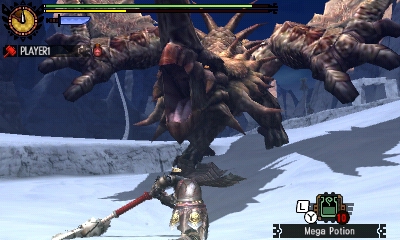 Above: Yes, there are going to be monsters on this monster tour.

“Monster Hunter is considered an action game, so we’re fine-tuning those bits of the game until the very last minute,” series producer Ryozo Tsujimoto said in an email interview with GamesBeat. “Because we’re tweaking the Japanese version until the very end, this affects how fast we can localize the game. Compared to other action games there’s also a lot of dialogue and text in Monster Hunter, so I’m very sorry to say this to our overseas users, but still it takes a lot of time to localize the games no matter how quickly we start the localization.”

Even parts of the process that may seem small, like the naming monsters, takes time. Some, like the Gore Magala, the flagship monster for 4U (see above), have the same names in both English and Japanese. But for names that could possibly be hard to pronounce in English, or don’t carry the same nuance, the localization team will ask for a change.

“The feedback is pretty interesting to do because we really have to be like salespeople and pitch our idea to the director and convince them it’s the greatest thing ever,” Andrew said.

And while the localization changes all helped, Fujioka attributed another feature for 4U’s success, one that wasn’t exclusive to the English-language versions.

“… More than anything the addition of online play on the 3DS was huge,” Fujioka said. “Obviously in Europe and North America it’s very difficult to play with others locally due to everyone being so spread out, so having online multiplayer in the game really showed the appeal of Monster Hunter’s multiplayer to a wide range of players.”

The previous Western release, Monster Hunter 3 Ultimate, did not have online, while its Wii U counterpart did.

“Given that Japan is a small island country, there are more opportunities for people to meet directly, so the barrier for local play is low enough that lots of people can take advantage of it,” Tsujimoto said. “This time around, especially outside of Japan we had a lot of people asking for online multiplayer, which of course was a big thing for players.”

MH4U also had a demo, which Tsujimoto credits as being a big part for the game’s success in the West, as well as the work done by each region-specific Capcom office. Demos remain an important user-acquisition tool in enticing new players to check out a game, even if a lot of studios no longer use this tactic.

“First, I think the demo we released was a big factor,”Tsujimoto said. “We got feedback from our overseas branches, and we made it easier to find monsters compared to previous games, and in general made it easier to play for beginners. Second, we had a lot of cooperation from our overseas marketing leads and our localization leads, who feverishly came up with idea after idea just for this title, and that was a huge reason why this game was as successful as it was.” 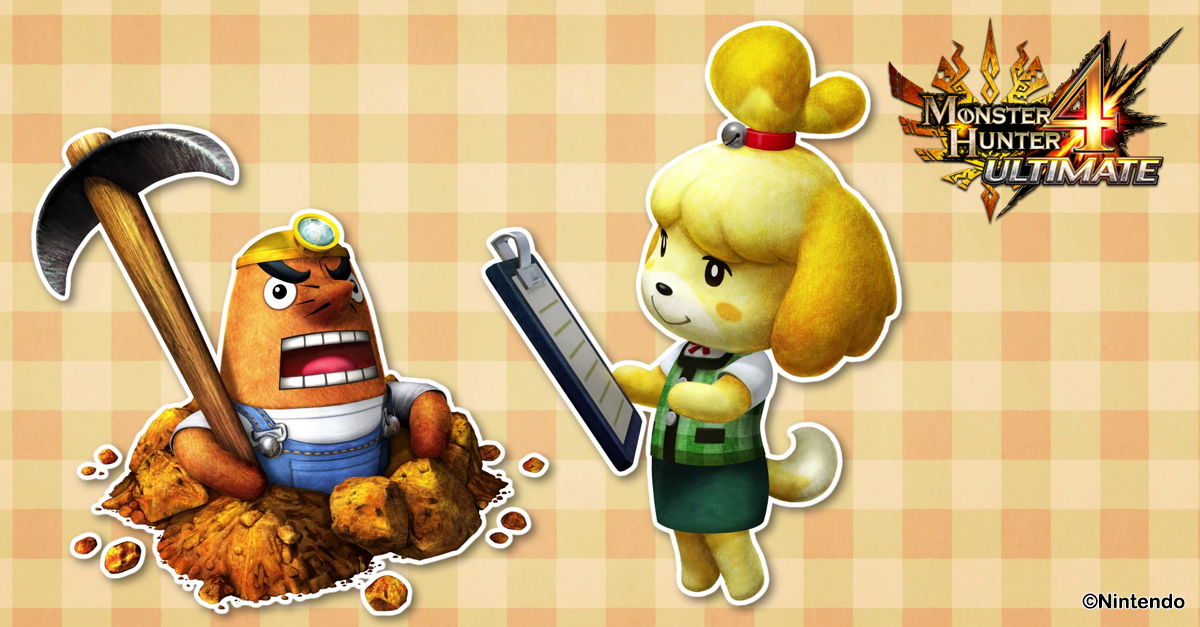 Above: Free DLC — like Mr. Resetti and Isabelle from Animal Crossing — continued monthly from MH4U’s release in February until November.

MH4U also had free monthly DLC in the West that continued after release until November of last year. This DLC included characters from franchises outside Capcom’s stable, such as Nintendo’s Link, Samus, and Animal Crossing characters; Sega’s Sonic the Hedgehog; and even armor designed by Square Enix artist Tetsuya Nomura (Final Fantasy, Kingdom Hearts).

Capcom’s USA office approached the marketing of MH4U differently than it had previous Monster Hunters.

“… The biggest focus I would say was on trying to broaden the MH experience, which is a challenge we approached in two different ways,” Tristan Corbett, Monster Hunter brand manager for Capcom USA, said in an email interview with GamesBeat.

This included focusing the team’s marketing on hitting a much wider audience and trying to showcase what the core Monster Hunter experience is like.

“MH can be very intimidating for new players so we wanted to devote some of our efforts toward building materials and programming that would help new players get into the experience and ultimately show people how great Monster Hunter is,” Corbett said. ” Internally we really felt that this was a game people really wanted to play; they just didn’t know it yet.”

One of these new initiates was the Monster Hunter Caravan, a replica of the in-game caravan that serves as a base for players in MH4U.

“We wanted to figure out a way to make a huge splash that would get people’s attention but also show off the game world and highlight the unique flavor and character of MH,” Corbett said. “And as MH4U is all about traveling with a caravan, we thought a mobile booth would be not only super cool but also a perfect fit for the game.

The caravan took three months to put together. It took the help of Iam8Bit, the Los Angeles-based production company and maker of video game vinyl, apparel, and other products; and Turtle Transit, a maker of mobile marketing vehicles, exhibits, displays, and large-format graphics, and it traveled across the United States, stopping at theme parks and conventions.

“Events are definitely a big part of how we promote MH and foster our community,” Corbett said. “Part of this of course is that MH is on the 3DS and having people playing together in person is arguably the best possible way to play the game, so we want to foster that type of experience as much as possible.”

Despite the series past performance in the West — Capcom has never shared exact figures for the older releases — Monster Hunter has still developed a growing community of fans, even if it’s been a slow build. Monster Hunter games are also known for being unforgiving — something that can make them harder for new players to pick up.

“Action games are a genre where the game’s difficulty is influenced by the player’s own ability,” Fujioka said. “The satisfaction of overcoming obstacles is something unique to action games, and we want players to have that catalyst in their lives every day. The real charm of Monster Hunter comes out when you’re experiencing the thrill of an action game while at the same time enjoying the game with friends regardless of their age or ability.”

And while even with Monster Hunter 4U the series still hasn’t reached the same levels of success it sees in Japan, MH4U showed the series does have selling power in the West.

“Finally, while we haven’t reached the numbers that we see in Japan, the fans who have stuck with us have helped us out a lot,” Tsujimoto said. “They’ve created their own communities for the game and spread the word out for us. We really appreciate the hard work of those fans!”

And even for the developers, it all comes back to those events, and creating and cultivating that originally small — but now growing — base of Western fans.

“We stress the importance of user community events whether they’re done in Japan or in other countries, and there are very few titles where we as developers can participate in events and directly communicate with our fans,” Tsujimoto and Fujioka said. “When you’re deep into game development, it can be difficult to gauge a user’s honest reaction, but working on Monster Hunter allows us to go to events, and acts as a stimulus for us.

“It reminds us who our games are for, which we think is invaluable.”