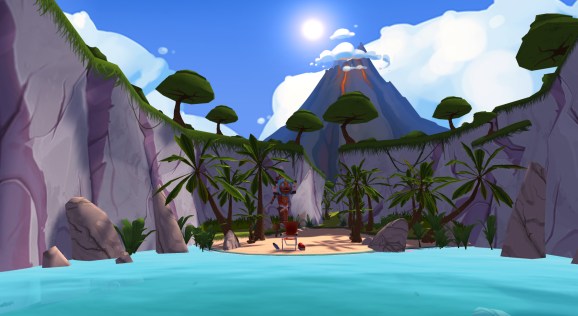 Artwork for the upcoming VR fishing game from developer Resolution.

AMSTERDAM — In a few months, consumers will have multiple high-end virtual reality devices to choose from, but many developers may stick with mobile solutions instead.

Smartphones and their VR peripherals — like Samsung’s Gear VR for its Galaxy phones — offer an enormous opportunity for game developers, according to a talk Resolution Games chief executive Tommy Palm gave at the Casual Connect Europe event today. Palm explained that VR is likely the next step in the chain of computational platforms that started with graphical user interfaces on personal computers and most recently gave the world smartphones with multitouch interfaces. This is one of the reasons Palm and Resolution are jumping into the VR space with games for Gear VR. Other reasons include predictions from investment bank Goldman Sachs and tech advisor Digi-Capital that the virtual and augmented reality (a related tech that combines real and digital imagery) business will grow to somewhere around $110 billion to $120 billion over the next several years.

For Palm, who was one of the designers behind King’s megahit Candy Crush Saga, the best bet to get a piece of that is to support the mobile side of the market.

Palm points out that smartphones are already ubiquitous in most places and for most people. They are multipurpose devices that all kinds of consumers build their personal and professional lives around. And he thinks people will prefer to add virtual and augmented reality to their smartphones rather than trying to integrate yet another specialized piece of hardware into their lives.

The Resolution executive further illustrated his excitement for this space by comparing the exponential growth of smartphones to the fast-selling Nintendo Wii console. He showed that while the dedicated Wii platform stalled around 100 million units sold, Android and iOS devices are already into the billions sold worldwide when combined. He suggests that the opportunity for mobile VR is somewhere in the gap between smartphones and consoles because gamers will easily fork over an extra $100 to buy something like the Gear VR to partake in the next major revolution in interactive software.

Palm wrapped up by giving some pointers for developing for this promising sector. He explained that his company has discovered it is easy to build VR experiences for an office-style swivel chair, but he says that it is a rare use case among consumers. Most people will likely use their Gear VRs on a couch or maybe a seat on an airplane, so they won’t have the freedom to spin all the way around.

Finally, many women (in general) hate single-player VR experiences during social events. They feel isolated from the people around them and won’t enjoy their time in VR. But if you give them a multiplayer VR experience, that changes. You can expect that a lot of early VR developers will focus on social experiences as they try to bring in a diverse audience.

Correction: This story originally said that VR gaming will account for $15 billion, according to Digi-Capital. That figure is actually less than $10 billion for both VR and AR gaming by 2020.