Golf can be a pretty sedate sport, and a virtual version of it could be just as boring. So Sameer Gupta, the cofounder of Golfstream, wants to make it into something fun and hilarious.

Gupta’s Golfstream has created the Golfstream Suite, which lets you play golf indoors with a “luxury suite” style experience. You can putt or drive golf balls on the indoor green and fairway. But Gupta has created some cool minigames and created a fun motion platform with augmented-reality overhead projectors that change the experience into something a lot more fun than a game of golf. It’s an “indoor laser golf course” with augmented-reality experiences, Gupta said in an exclusive interview with GamesBeat.

Golfstream complements the service with a high-end food and beverage experience. The idea is to turn the place into a luxury suite. TaylorMade is sponsoring the suites so that it can promote and sell its golf clubs to the guests. And it has teamed up with the Wheels Up event to show off the platform — which initially costs hundreds of thousands of dollars to build — for the first time. Gupta told GamesBeat that he plans to lease the suites to sponsors and others who want to cater to elite corporate and sports enthusiast audiences.

“Golfstream Suite allows you to play tee-to-green golf” on courses like Pebble Beach, said Gupta, the chief executive of Golfstream in Los Angeles. “But we found during development that people love these minigames. I basically took the lessons of Candy Crush Saga and Words With Friends, or snacking on games, and applied them to the game of golf.” 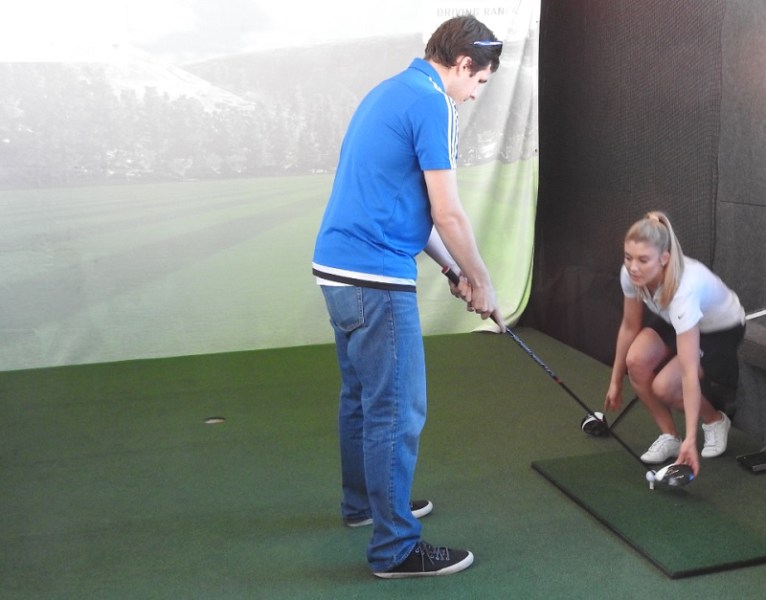 He added, “We’ve created a live group gaming experience. People are desperate to do things in groups.”

I saw the Golfstream demo at the Avaya Stadium in San Jose. Gupta is also showing it off at the DICE Summit, the elite game event in Las Vegas this week. I happened to go into the suite with a crew of San Jose Earthquakes people, and they were quite enthusiastic. It was kind of like a wacky tailgate party.

Golfstream showed off its experience at the Wheels Up Super Saturday Tailgate Party in San Francisco.

“Golfstream has hit a perfect drive. They have combined technology and golf in an experiential format that is unbelievably fun and memorable,” said Wheels Up cofounder Gary Spitalnik. “Having Golfstream launch their product at our 2016 Wheels Up Super Saturday Tailgate was a win-win for both companies.”

Gupta has assembled a team of 25 engineers (including some former NASA rocket scientists) to build the platform, which makes you feel like you’re putting or driving on any course in the world. The staff comes from Disney, Electronic Arts, Activision, Skunk Works, and Caltech. 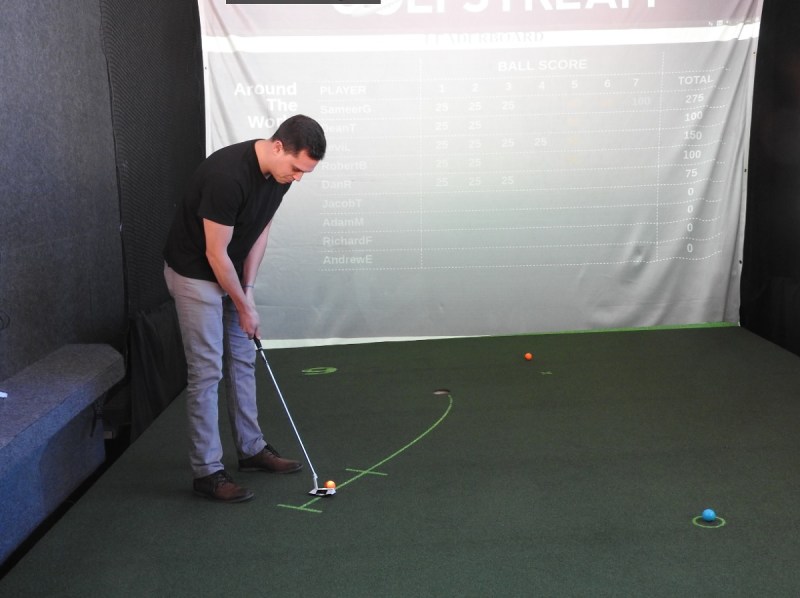 Above: Golfstream uses projected light to show you which way to putt the golf ball.

There are, of course, a lot of indoor driving ranges where you can see how far you can hit a ball. But Golfstream has patented its “moving green” technology and a laser-putting system. The green part of the platform can be adjusted to simulate bumps and breaks on a putting green. And a laser projector above can outline the path that you should hit the ball in order to sink it into the hole. That part of the experience is much more interesting than the old indoor ranges.

It’s a fresh coat of paint on an old sport that is in need of getting some new and younger fans. Through a kind of glasses-free virtual and augmented reality, the experience combines games with upscale food and beverage, creating a more social and accessible entertainment experience.

Using the screen and the green itself, Golfstream can project 3D logos and commercials from sponsors.

Golfstream will soon be announcing additional locations nationwide, including arenas/stadiums, sports and entertainment venues, restaurants, bars, hotels, casinos, shopping districts, cruise ships, and more. After the TaylorMade activation in Las Vegas, Golfstream will showcase at SXSW in Austin and the Masters in Augusta.

Gupta formerly created RivalMe, a personalized mobile trivia game built on a tiny budget. He showed it off at our 2013 GamesBeat event, but it didn’t win the competition. Still, I was struck by Gupta’s intelligence and perseverance, and I’m not surprised to see him working on new game-related technology. While the motion platform is expensive, Gupta said it is built with off-the-shelf hardware, which keeps costs lower than they would otherwise be.

And this time, Gupta has teamed up with some very interesting people.

“I’m proud to be associated with the team at Golfstream,” said professional golfer Ben Crenshaw in a statement. “The way they have used technology to blend the world of golf and entertainment is something that is overdue in both the golf industry and the live entertainment industry. Not only can I enjoy playing with my friends, but I have even more fun with my wife and kids. This is truly a game changer.”

The minigames are targeted for groups of four, eight, or more. Gupta greeted our group along with a couple of young women, Ashton and JJ, who served as waitresses and “caddies” who could show us how to play the games, which are hosted on an iPad app.

In the first minigame, we stepped up to see how far we could drive the ball off a tee. I stepped up to the ball with a driver. I blasted one at the canvas screen, which showed a ball flying outward about 169 yards, and was in the middle of the pack. It was maybe the first time I whacked a ball in 20 years even though I was on my high school golf team. One of the guys from the group was all too happy to get instructions on how to swing from one of the caddies.

Then we tried a putting minigame. That was much easier since I’ve been to a lot of mini golf joints over the years. But the motion platform that we were standing on moved a little, and there was a curve on the putting surface that created a break for the ball. The overhead projector shined a light down on the surface. It showed the ideal curve path for the ball to follow if you wanted to sink it in the hole. It made putting the ball much easier, and I was able to scores some points, which came in the form of poker chip rewards after each round.

Next, we had to putt balls from different spots that were illuminated by the projectors on the ground. If you sank seven putts in 30 seconds, you could score a ton of chips. In a more goofy minigame, I was putting, my teammate was rolling balls at the hole, and Gupta was throwing balls at the hole — all at the same time. The team that scored first at putting, rolling, and throwing balls won the match.

The stage also has cameras that can capture the action and then email them to you in the form of photos that you can share with friends. The analytics on your performance can also be shared.

Golfstream is currently in a soft launch phase, and it’s gearing up for production soon. And golf isn’t the only sport that lends itself to these motion-based AR platforms. Gupta said other sports can also be enhanced with this kind of AR experience as well.

“It’s ready to go today,” Gupta said. “For five to 10 years, this kind of format, incorporating other technologies over time, is going to be the leading edge of augmented-reality design,” Gupta said.