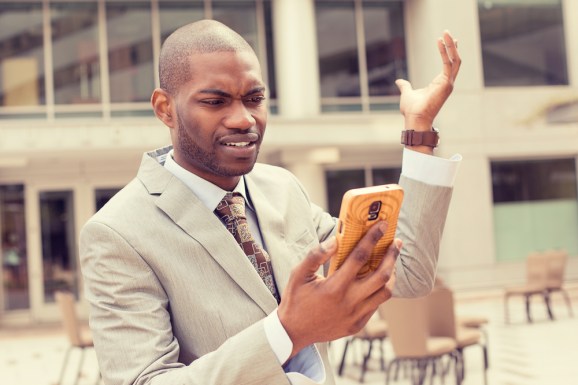 We quote-unquote grown-ups joke about how impatient we’ve become now that the mobile age and all of its abundance has been handed to us on silver platter, but have you ever watched a teenager, or a newly-arrived millennial, navigate the apps on their smartphone?

Their instant gratification demands are off the charts. If a game or social or mobile commerce app doesn’t rapidly open, and then render the desired content in less than five seconds, that phone is either already being thrown across the room, or the app itself is already in the process of being deleted (perhaps with a quick typed review in Google Play or the App Store along the lines of “Didn’t work this apps no good u guys need 2 fix ur bugs”.

It’s not at all inconsistent with findings from the likes of Dimensional Research, who recently found that for all of us — teens, millennials and fogeys — a mobile app needs to initially load onto user devices in 4 seconds or less, and provide continuous response times of 1-3 seconds to satisfy the vast majority of users. I think I can say with some assurance that most apps, even on my own device, aren’t cutting it. No wonder so many app developers are heavily policing their app store comments with dedicated reps, making sure to quickly counter or validate negative comments about speed, performance, and load times. It’s a tough and exceptionally competitive environment, and it’s becoming all too clear how we got to this place.

It’s the age-old paradigm of fashion vs. function — or, in modern tech terms, front-end vs. back-end. By prioritizing UI, UX, functional and visual design, and so on, apps have become beautifully loaded color-bursts of functionality, and there’s certainly nothing wrong with that. Four years ago, the average iOS app was 23MB. Now they’re averaging out at 50MB — more than double the size. We’re putting a lot into our apps these days, and networks aren’t always well-equipped to respond to all the activity going on within any given app.

To give an example: there are a variety of third-party calls built into virtually every full-featured mobile app these days — data, content, ad networks, analytics tools etc. — and they’re loading up the app with calls that slow down performance. The typical mobile app incorporates at least five third-party calls, and some use over 40. Each time a call occurs, additional lag time to retrieve all this data stutters the app’s performance.

Some apps feature multiple API calls to even load a single screen, or configure said APIs in a “cascading” manner — in which one function in an app can’t happen until another one does. This practically guarantees reduced performance and increased user frustration. Alas, the answer in our “fashion-forward” app environment is almost never to exclude this third-party functionality, because naturally users demand all the latest features, and quite rightly, will uninstall apps that lack the features of competing apps.

What happens when app developers ignore the mobile mile

Yet the biggest casualty of our unrelenting focus on the front end is the big piece we’re ignoring on the back end, and that’s the path an app’s session(s) travel from the edge of the Internet to the device itself. Often called the “mobile last mile”, — at Neumob, we simplify it and call it the mobile mile — this is where 70-90 percent of all app latency and lag occurs. It’s where great apps and all those wonderful UIs and third-party calls are left to die on a flaming pile of abandoned sessions and angry user comments in the app stores.

Existing legacy CDNs, who do a great job with speeding up websites and who focus on the mobile web (in browsers such as Safari, Chrome, and Opera), don’t do anything to speed up app performance. It’s not in their DNA. With no mobile-first features, such as a mobile-specific communications protocol nor mobile last-mile acceleration features, CDN acceleration capabilities dwindle.

The high-speed transmission to the edge of the Internet suddenly slows to a crawl over the mobile last mile — the most critical stage in the delivery process. As tough as it is to get consistent knockout app speeds in the United States, where I live, it’s infinitely more difficult for an app developer to guarantee first-class speed and performance to someone who downloads their app in the mobile-first nations of Brazil, Indonesia, or India.

This is why 2016 is shaping up to be the year that functional, back-end app solutions start reaching parity with all those wonderful things we’ve done on the front end. Understanding and striking the proper trade-offs between fashion and function will allow apps to be both gorgeous and to rapidly load in milliseconds; to be both forward-looking and to perform their essential functions like the true clock-beaters they’ve always wanted to be.

Jay Hinman is VP of Marketing at Neumob.