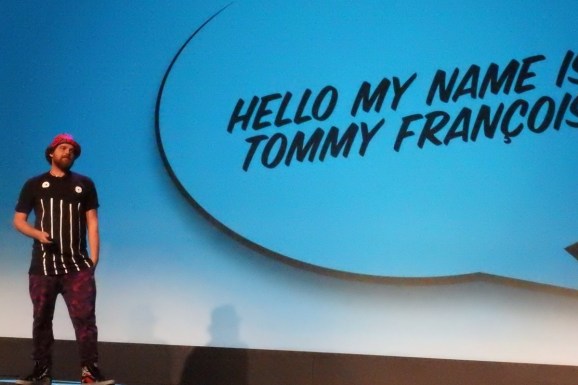 Tommy Francois is head of new intellectual property at Ubisoft.

LAS VEGAS — Ubisoft game creator Tommy Francois shared how the big French video game publisher creates the animated worlds of its video games such as The Division and Ghost Recon: Wildlands. It basically sends teams of developers out to real-world locations to capture the full spirit of the places in order to re-create them in video games.

Francois, the vice president of editorial at Ubisoft, described the process of creating open worlds today at the DICE Summit, the elite game event in Las Vegas. Francois believes that if creators build an immersive world, it will pay off in more engagement, which will lead to more word-of-mouth endorsements and better overall sales and player loyalty — a key tactic in a game market valued at over $90 billion.

“I want to empower teams to make video games into a more impactful medium,” Francois said. “Worlds are super-complex to create. They’re simulations. I have two sons. When my sons play an open-world game, when they are done, maybe they will be smarter because they have learned something from the game. With that in mind, I work very hard to create mindsets to help Ubisoft developers create more immersive, impactful worlds.”

Francois showed a video, dubbed World Logic, which illustrated how teams do research on game topics (like a Western).

“We are creating worlds,” Francois said. “I love to reach books and watch movies. They are wonderful entry points for research. When you create worlds, it’s a trap to only read books. I’ve seen every movie on Las Vegas, and I might think I can do a game about Vegas. But we have to ‘smell the grass.'”

That means Ubisoft sends teams out to capture the essence of a place. When you get off the plane in Las Vegas, he said, it takes about 5 seconds to realize the pace, energy, and even the smell of the place.

“This is about enriching players’ lives,” he said.

He showed a video that a Ubisoft team put together when it went to Nepal to capture the setting of Far Cry 4. They quickly concluded that the world they had already begun building was a “Disneyland version of Nepal” and it had little of the gritty realism of the place, as seen in the video. The team redid the world to make sure it got the details right.

Ubisoft did the same when it created the world of post-apocalypse New York in the upcoming The Division. The teams went underground to see subway lines that people could use to escape from New York in the event of a disaster.

The team also used a tool dubbed World Texture Facility (WTF), to supply artists and developers with a treasure trove of data, videos, images and other details that the team can look at and access. Some of it is collected by the teams that visit the sites, but a lot is also collected from pop culture. This primary source material ensures that the team will “smell the grass” and not just regurgitate a diluted version of someone else’s view of New York.

“WTF is a digital database that all the artists have access to inspire their work,” Francois said.

The team also created a World IOLogic Projector, which basically allows a team to create an animated region of a world and then change it with day-night cycles and seasons.

“As entertainers, we have a responsibility to make the world a better place,” he said, and that involves creating worlds that are faithful, immersive representations of the real thing.

“Our responsibility toward players is to capture the different cultures and help them understand them,” he said.

The team took the same approach in creating the upcoming military future combat game Ghost Recon Wildlands, which is set in the drug wars of Bolivia. The team that visited Bolivia went out with a special forces team into the wild, where they engaged in tasks such as burning cocaine labs.