Success in keeping social media-savvy customers happy is all about speed.

If you’ll allow the metaphor, it’s about making sure the customer support bus doesn’t drop below 50 resolutions per hour, or it’ll explode.

The problem being tackled is one I know well.

My research shows that — among the top 1,500 brands on Twitter — more than 290 million social media complaints per year are being ignored. Brands that are responding typically do so very slowly, which is as dangerous as ignoring the consumer’s digitally voiced woes.

In fact, only 17 percent of those who complain over social media receive a response within one hour. This is symptomatic of a world in which 70 percent of big brands use social networks as a broadcast channel, rather than for engagement. That’s fine for news outlets, but not so good if you sell products or services to consumers.

“I think there’s a tendency to see social media as another form of advertising; one where it’s easier, cheaper, faster to get the word out to your customers, instead of as a two-way street for having a conversation with your customers,” Matthew Zito, vice president of product at Synthesio, told me. “One reason for that is the sheer number of places those conversations take place — it’s not just the big social networks, it’s also the millions of forums out there devoted to specific topics, the comment sections of blogs, and even places like review websites.”

Synthesio’s overhaul allows social media managers to interact with social data in real time, with content performance trackers that identify mentions, trending topics, website content, and other posts that you want to be notified of. That, according to Zito, is a good place to start if brands are going to put the “social” back into “social media.” 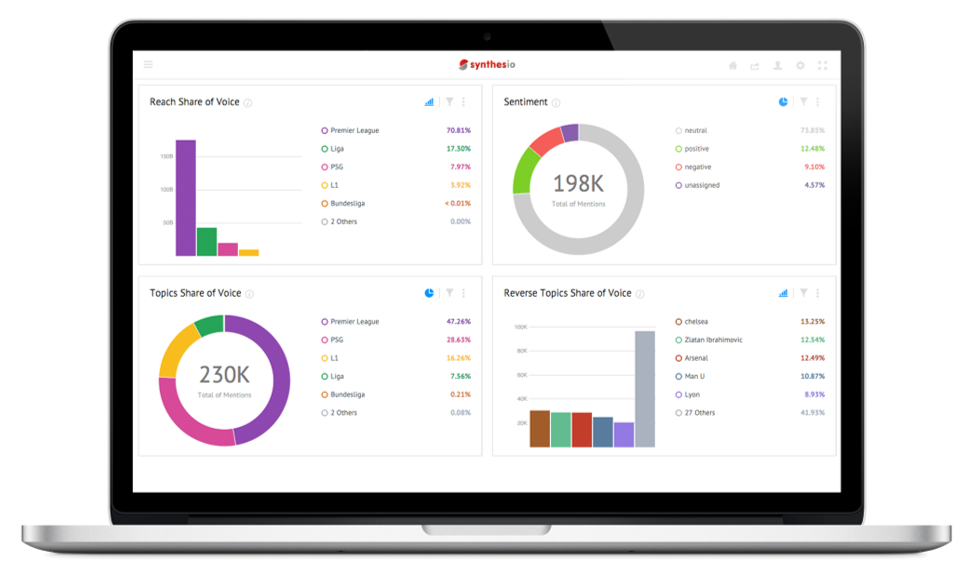 “We think the critical starting point is to listen to everything that’s being said, identify where the conversations are happening, find influencers, basically get a clear picture of your brand online,” Zito said. “Once you’ve done that, you can build an informed engagement strategy with more confidence and clearer goals.”

Looking at the present is one thing, but social media marketing also needs to feed the C-suite and executives with data, metrics, and KPIs.

Synthesio 3.0 has a new set of capabilities that allow you to filter years of data, with new wildcard operators to track keyword variations. This enables you to identify the insights contained within, and makes it easy to present the data to the people who need to see it, by generating instant reports. And if you need to put those numbers on a big screen so that everyone in the company can get a sense of the conversations that are happening online, Synthesio Beam presents them in a war-room style dashboard.

Synthesio also includes sentiment analysis, using a rebuilt natural language processing (NLP) tool to understand — and highlight — messages that are categorized as positive, neutral, or negative. It does this across more than 70 languages, monitoring conversations in over 220 countries. The NLP engine rebuild created some technical challenges for the team behind the software.

“Any kind of NLP is really hard, particularly across a broad set of languages,” Zito said. “Typically when we’re adding a new language, we work with native speakers to understand the nuances and differences between different dialects, regions, etc. For example, we support the differences between Brazil’s and Portugal’s Portuguese, as well as five different forms of Arabic.”

As we discussed in a recent webinar, understanding these differences at a granular level can be critical to success in a world where 70 percent of Internet users don’t speak English as their first language. How does Synthesio stay on top of the cultural shifts that affect NLP?

“Once we’ve built our models, we’ll test, adjust, and iterate until we reach our accuracy goals,” Zito said. “Since language isn’t a static thing — new words emerge, styles change — we also revisit our models on a regular basis to make sure they’re still as relevant as they need to be.”

Speed solves a lot of problems in social media, especially for businesses that choose to interact with people who are talking about them online, and in any language. Being able to communicate what is working and what needs attention is also important, especially in social media, where executive buy-in can be an issue. While Synthesio is but one solution in a highly competitive marketplace, this overhaul ticks both of those boxes.