Thirstie, an online booze emporium and delivery service based out of New York, has announced it is acquiring DrinkFly, a competitor based in Chicago.

Founded in 2013, Thirstie partners with local stores to offer a range of wine, beer, and spirits for delivery within an hour, and currently operates across New York, Los Angeles, San Francisco, Chicago, Miami, and Washington D.C., among other U.S. markets. The company went international back in October when it launched in Canada, kicking off with Toronto and Ottawa.

DrinkFly has only been in business for a couple of years, and was founded exactly one year after Thirstie. It only serves Minneapolis/St. Paul, Dallas, Houston, and New York, but the acquisition will help boost Thirstie’s existing customer base in the U.S., particularly in Chicago’s metro area, where it will now be the single biggest player in the space. 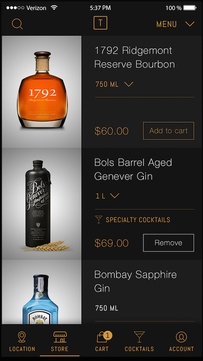 Alcohol delivery services have taken off in a big way in the U.S. over the past few years. While companies such as the mighty Amazon have started taking their first tentative steps into the space alongside broader delivery and logistics companies like Postmates and Instacart, niche booze-focused services — including Drizly, Minibar, Flaviar, BrewDrop, Ultra, Swill, Sqyre, and Saucey — have infiltrated conurbations across the country

It’s fair to say that while the market is ripe for capitalization, it’s incredibly fragmented too, which is why a degree of consolidation is to be expected. Indeed, today’s acquisition isn’t the first to take place in the alcohol delivery sphere — Minibar bought Booze Carriage last March. And we can likely expect more such mergers or acquisitions to occur in the future, too.

“While I agree that the on-demand market has become oversaturated, we commonly see many highly-funded players struggle to have a clear business model and survive in the long-term,” explained Thirstie founder and CEO Devaraj Southworth, to VentureBeat. “From the beginning, Thirstie has had a different approach by making sure we spend our own capital, proving that our strategy is working, before seeking external funding to further grow our business.”

For the record, Thirstie has raised around $2 million in seed funding to date, compared to the likes of Drizly which has notched up almost $18 million and revealed today that it too is launching in Canada.

“The industry is clearly fragmented and the markets are starting to recognize the excessive capital spent,” continued Southworth. “The market is ripe for consolidation, which enables larger businesses with more capital and aggressive expansion strategies to selectively acquire strong regional players. This eliminates operating redundancies and the need to comprehensively evaluate regional marketing strategies.”

As a result of this acquisition, DrinkFly’s users and retail partners will be transitioned over to the combined entity in due course, with Will Cullen, CEO and founder of DrinkFly, taking on an advisory role at Thirstie.
Looking to the future, Thirstie said that while North America will be its main immediate focus, it’s also assessing opportunities for growth in Europe and Southeast Asia.