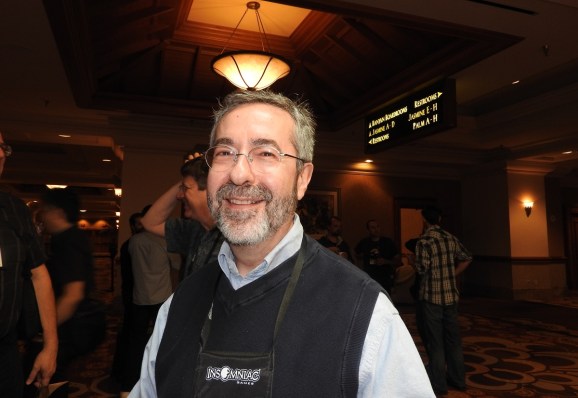 Warren Spector, the veteran game developer who has been teaching video game creation for the last three years, is joining OtherSide Entertainment so that he can create System Shock 3, a new version of the beloved System Shock game series.

The game will take advantage of a strong wave of nostalgia for games like System Shock, a first-person action role-playing game which came out in the 1990s but hasn’t had a sequel since 1999. System Shock was praised as novel for its “emergent” gameplay, where you could tackle challenges in different ways. Nostalgia games are an increasingly big part of the video game market, as fans gravitate to properties that they are familiar with — and then play those games with their kids. It’s a lot like the new Star Wars movie, viewed by both adults and kids alike.

Spector said during a conversation at the DICE Summit game event in Las Vegas that he plans to finish up his game design teaching work at the University of Texas at Austin and start a new studio in Austin with OtherSide Entertainment, which is headed by Paul Neurath, the founder of Looking Glass, the now-defunct company that made the original System Shock.

Neurath is doing a “spiritual successor” to the Ultima Underworld dungeon-crawl games, dubbed Underworld Ascendant. That PC game is being made without the Ultima franchise name, which Electronic Arts owns. But the game is a reimagining of the Ultima series in a new fantasy universe. He recruited Spector to come back into gaming by asking him if he would make a new version of System Shock.

Spector was the creator of the very first System Shock, which debuted in 1994. Neurath has been able to secure the rights to System Shock.

Spector also was a key creator of the Deus Ex and the Ultima series. Spector has been advising OtherSide on Underworld Ascendant since its start. Spector is looking for funding for the new studio, which will need to hire a considerable number of people to make System Shock 3 as a PC game. The title could be made for other platforms too.

“Paul was the devil sitting me on my shoulder tempting me to come back and make games,” Spector said.

Spector said that the studio will be a reasonably big effort for an indie game company, with a relatively large budget. But he said it won’t be on the order of $40 million to $50 million, as he has done in past games.