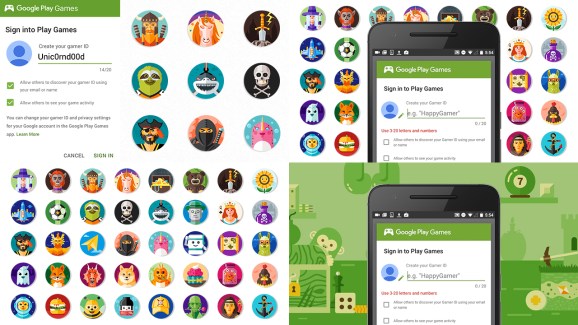 You no longer need a Google+ account to enjoy the benefits of connected gaming on Android.

Google is introducing Gamer IDs to its Google Play Games service for players and developers. This enables anyone to claim a unique handle that doesn’t have to link to an existing account, which means you can pick a random name like “Unic0rnd00d” instead of displaying the real name you have tied to your Gmail or Google+ (as it’s done with other products). This eliminates a barrier between gamers who want to start playing apps online with friends but maybe don’t want to sign up for yet another social network. And destroying those resistance points are crucial as Google tries to increase player engagement and spending on Android to grow the $30 billion mobile gaming sector that it dominates alongside Apple.

This is the latest sign that Google is backing away from Google+. That social network has not found much success — especially compared to the growth of Facebook, Instagram, or Snapchat. Google Photos launched without it, and YouTube doesn’t need require it anymore. At this point, the stagnation of Google+ often serves as an impediment to other products, like Google Play Games.

In addition to removing the Google+ requirement and giving gamers a chance to use an anonymous nickname, Google is also streamlining the sign-in process for all games going forward. If you already have a gamer ID, you no longer need to sign in to every game on your device. Instead, your device will already recognize that you have an account and will tie your information to any new game that you boot up that uses the Google Play Games technology. For developers, this means they will have an instantaneous way of understanding who you are as a gamer. They’ll also have ways of reaching you with notifications, leaderboard information, and achievements through the Google Play Games apps.

Above: Google wants you to use whatever gamer ID that you want.

This new gamer ID system is similar to what Apple and even console services like Xbox Live use. Your handle is unique to you, and you can claim yours by updating the Google Play Games app.