Mobile advertising-powered Internet provider Jana announced that it has raised $57 million in funding that will enable it to connect more people in emerging markets. The company’s Series C round was led by Verizon Ventures and included participation from returning investors Spark Capital and Publicis Groupe.

Jana said that it plans to use the funds to expand into emerging markets, specifically targeting China as its next move. As part of the deal, AOL CEO Tim Armstrong has asked to serve on Jana’s advisory board.

With a mission that bears similarities to Facebook’s Free Basics or Google’s Project Loon, Jana wants to not only bring the Internet to more people, but make it free in the process — there’s just a bit of a catch. The company started back in 2006 when founder and CEO Nathan Eagle was working in Kenya as a Fulbright Professor. With his students, he built a system to enable rural nurses to text blood banks when supplies were low. However, there was a problem with the program: It cost too much for nurses. 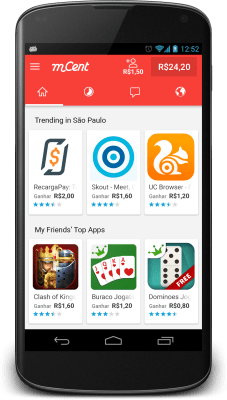 Eagle wondered what would happen if the system could pay you to use it. This principle started Jana, which today helps pair brands with consumers in emerging markets. Through this partnership, people watch ads, discover apps, and try out new services, while being paid for their time. Some of the use cases include CNN polling 20,000 African panelists about what they thought of the new Pope, or conducting polls on what activities people in key countries did on WhatsApp versus Facebook.

“Over 30 million users have benefited from Jana’s free, unrestricted Internet access,” said Eagle. “But our goal is to reach the next billion.”

With the company’s business model, it’s no surprise to see Verizon and AOL invest in Jana. The company already partners with more than 311 mobile operators worldwide, so bringing in the U.S.’s largest carrier would just add to its stature. Additionally, AOL has an enormous mobile advertising offering (see AOL One).

Publicis Groupe was an early investor in Jana, having invested $15 million in 2013. Maurice Levy, CEO of the advertising holding company, said at the time: “Everyone is fighting very hard and trying to find solutions to get these next billion consumers, and we all know the next billion consumers will come from emerging markets.”

“In four years, brands will spend an estimated $300 billion on advertising, which provides a major opportunity for Jana to work with brands to offset data costs for accessing the Internet,” said Verizon Ventures director Vijay Doradla.

To date, Jana has raised more than $93 million in funding.

Updated on Thursday at 6:48 p.m. PT: This post has been updated to reflect that Tim Armstrong asked to serve on Jana’s advisory board, not that he was named.