The Academy of Interactive Arts & Sciences gave Iwata one of its highest honors at its annual DICE Awards event for his many achievements such as introducing the Nintendo Wii video game system and the 3DS handheld system.

John Schappert, founder of Shiver Entertainment and former chief operating officer at Zynga and Electronic Arts, made the presentation of the award in front of a crowd of game developers and executives at the DICE Summit event in Las Vegas.

“My friendship, admiration, and respect for Mr. Iwata is so great,” Schappert said. “He was not a normal video game executive. He was a game maker, designer…. His passion and dedication are deeply missed. So please, make every game count.” 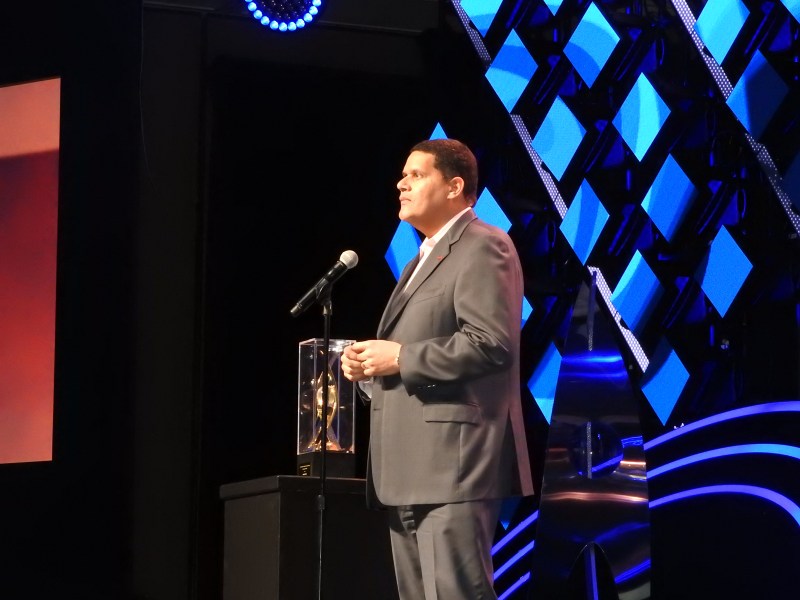 Above: Reggie Fils-Amie of Nintendo of America at the DICE Awards.

Iwata, who became Nintendo’s president in 2002 and died from cancer this summer, wrote the code for Kirby, Super Smash Bros., Earthbound, and other games. Iwata wanted everyone to be a gamer, Schappert said. In a speech at the Game Developers Conference, Iwata once said, “In my heart, I am a gamer.”

“Mr. Iwata has been gone for some time now, and I think about him almost every day,” he said. “Mr. Iwata, you were the best of us.”

He wanted to broaden games and make them more accessible while helping many in the game industry create titles, such as Nintendo’s own Brain Age, that had a much larger reach into the population of people who didn’t grow up playing games.

“It’s really difficult to overstate the value that Iwata-san brought to the business,” said Rich Hilleman, chief creative director at Electronic Arts, in an interview. “From the early work he did before he was in charge, in bringing Super Famicom to North America and resurrecting the video game business in North America, to the stalwart efforts that brought the great pieces of hardware and software to the market.”

“For most of the people in this room, Nintendo products, and in particular the Mario and Zelda series, are the yardsticks we still measure ourselves by,” Hilleman said.

Martin Rae, head of the AIAS, said in an interview that the board felt that Iwata had a huge impact on the industry.

“It’s very fitting, and nice to be remembered this way,” Rae said.

Ted Price, an AIAS board member and CEO of Insomniac Games, said in an interview, “He expanded the video game market in a way that hasn’t been rightly recognized. Because of Iwata and his leadership at Nintendo, we have far more people playing video games. The Wii was the console that everybody, children and grandparents, were playing.