Tapjoy, a leading mobile app monetization platform, is announcing partnerships with several of the mobile industry’s leading ad mediation companies, such as MoPub, Fyber, and AerServ. The integration marks the first time app developers can apply predictive analytics and user-level data to mediated ad demand, all in a single SDK.

The ad marketplace, like any marketplace, comes down to supply and demand. App developers provide the ad “supply” — or the various instances within a mobile app where an ad can be shown. This is filled by agency- or brand-led “demand” — marketers who provide the actual ads. The problem is, there’s an overabundance of ad networks, each with their own unique demand requirements. App developers often find that the best demand is spread across multiple ad networks. Ad mediation is essentially software that organizes disparate ad networks — allowing for a semblance of transparency and access across the marketplace — and ultimately helps developers find the highest paying demand for their supply.

This isn’t novel technology, but it’s especially relevant for mobile. Game developers, in particular, often want a choice of ad networks to promote games, since they’re seeking specific kinds of customers that different ad networks can reach. Upsight’s recent Fuse Powered acquisition is the industry’s only other available instance of marketing automation combined with a mobile ad network platform. The two vendors were both featured in detail in our research report on mobile marketing automation.

Tapjoy’s announcement offers a similar tool, but with an important distinction — Tapjoy is providing intelligence on how to not only maximize the value of an ad opportunity, but also determine who should see the ad in the first place. That second piece is powerful.

Paul Longhenry, Tapjoy’s SVP of strategy and corporate and business development, told me, “This is the first time that any mobile marketing automation platform has enabled developers to utilize predictive analytics to bring ad mediation demand to targeted consumer segments, such as those cohorts that are predicted to remain as non-spending customers.” He went on to say, “The combination of Tapjoy + our Mediation Partners is a unique solution that solves for both who should see and ad and how to then maximize the value of resulting impressions.”

Space is extremely limited — we’ve only got seats for a total of 180 executives — but it’s not too late to apply for one of the remaining seats.

This combination drives optimal ad pricing, but also makes sure that neither existing nor predicted paying customers are distracted by ads. Tapjoy accomplishes this with tools like the “Future Value Map,” which helps app publishers predict which consumers, down to the number of users in a specific segment, are likely to make an in-app purchase at some point, how much they are likely to spend once they start, and which will never become paying customers regardless of how many times they’re asked (which, according to Longhenry, is at least 80 percent of every app’s audience, regardless of category). 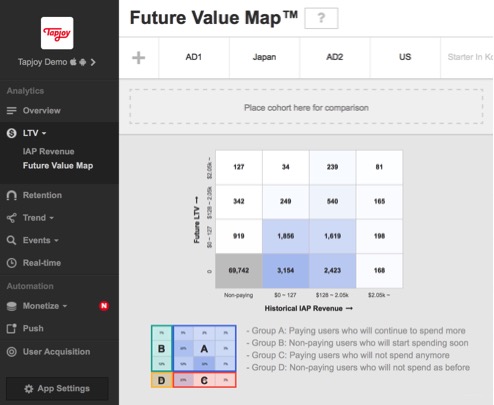 While every app is different, there is a great deal of crossover on specific attributes of app users. Tapjoy is now tracking more than 80 billion in-app events every month, and optimizing more than $1 billion in IAP + Ad revenue every month.

Without tools like these, publishers are essentially wrangling a sort of Frankenstein’s monster of monetization and engagement tools. Longhenry said publishers would first need to do the complex customer analytics on their own, “[apply] another set of tools to drive those customers to engage and purchase content (through push notifications and/or in-app messages) and another set of ad network partners if they had an ad monetization strategy. Each of these systems have their own data sets and do not talk to one another – meaning that insights gleaned via one set of services (for example, which consumers are likely to purchase content in the next week) were not actionable for another set of services (for example, optimize ads for those consumers not likely to convert to paying customers).”

Tapjoy’s mediation services are now free to use for any developer who has integrated the latest Tapjoy SDK.