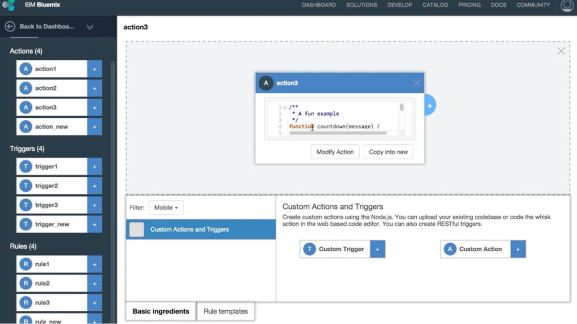 A screenshot of the IBM Bluemix OpenWhisk service.

Bluemix OpenWhisk isn’t just important for IBM because, more than a year after Lambda’s introduction, Big Blue’s cloud finally has its own tool for performing functions in response to certain rules being triggered — without making developers worry about infrastructure. OpenWhisk stands out from Lambda, and the recently unveiled Google Cloud Functions service on Google Cloud Platform, because the underlying code will be available on GitHub under an open-source license that allows anyone to inspect the code and build on it collaboratively.

OpenWhisk works with the Node.js server-side JavaScript framework, as well as Apple’s increasingly popular Swift programming language. It can draw on Watson’s “cognitive” smarts, which could help developers identify the best application programming interfaces (APIs) to use. And OpenWhisk can be highly customized, through a web service or the command line, in order to meet companies’ needs, rather than remaining tied to IBM cloud services.

“The endpoint for Whisk is fundamentally the Swagger-defined API,” Angel Diaz, vice president of cloud architecture and technology at IBM, told VentureBeat in an interview. “Because of that, it can tie into containers, it can tie into a Weather Channel feed — any services we’ve got or any service anyone else has.”

That sort of flexibility and the open-source nature of OpenWhisk could make the service stand out from the competition. And that’s good. The public cloud field has been narrowing — for instance, Rackspace started focusing much more on managed services in 2014 — but every little shred of strategic advantage counts as IBM takes on the likes of AWS, Google Cloud Platform, and Microsoft Azure.

Also new from IBM are two Watson APIs: emotion analysis and visual recognition. These aren’t unprecedented — a few days ago, Google announced the beta of its Cloud Vision API, and Microsoft previously launched a beta of its Project Oxford emotion detection API.

In addition to its own internal development, IBM has looked to partners as it continues rounding out its cloud. Here are the new offerings: