Update at 1:00 p.m. Pacific time on Tuesday, February 23: Xbox Live is mostly up and running. It was offline for more than half a day, and we’ve asked Microsoft again for an explanation.

Microsoft’s online gaming infrastructure is having a rough February.

Xbox Live is still down after going offline at around noon Pacific time (3:00 p.m. Eastern) for some gamers, according to complaints on social media. Microsoft confirmed the issues on its Twitter account. People are having trouble booting up their digital games and logging into Xbox Live. This means that if you own a download-only release like Trials Fusion or the digital version of something like Star Wars: Battlefront, they won’t start. Some people are also reporting issues booting up Hulu, Amazon Instant Video, and Netflix. Instead, you get an error message. I tried this out myself, and I ran into the same problems. This is the second week in a row for disruptions on Xbox Live, which is one of the key services that Microsoft uses to generate revenue from its gaming division.

While not everyone pays for an Xbox Live Gold membership, the premium tier that gives customers access to special deals and online multiplayer, millions of people do. And these outages are a major source of frustration for anyone paying $60 a year so that Microsoft can maintain its servers. 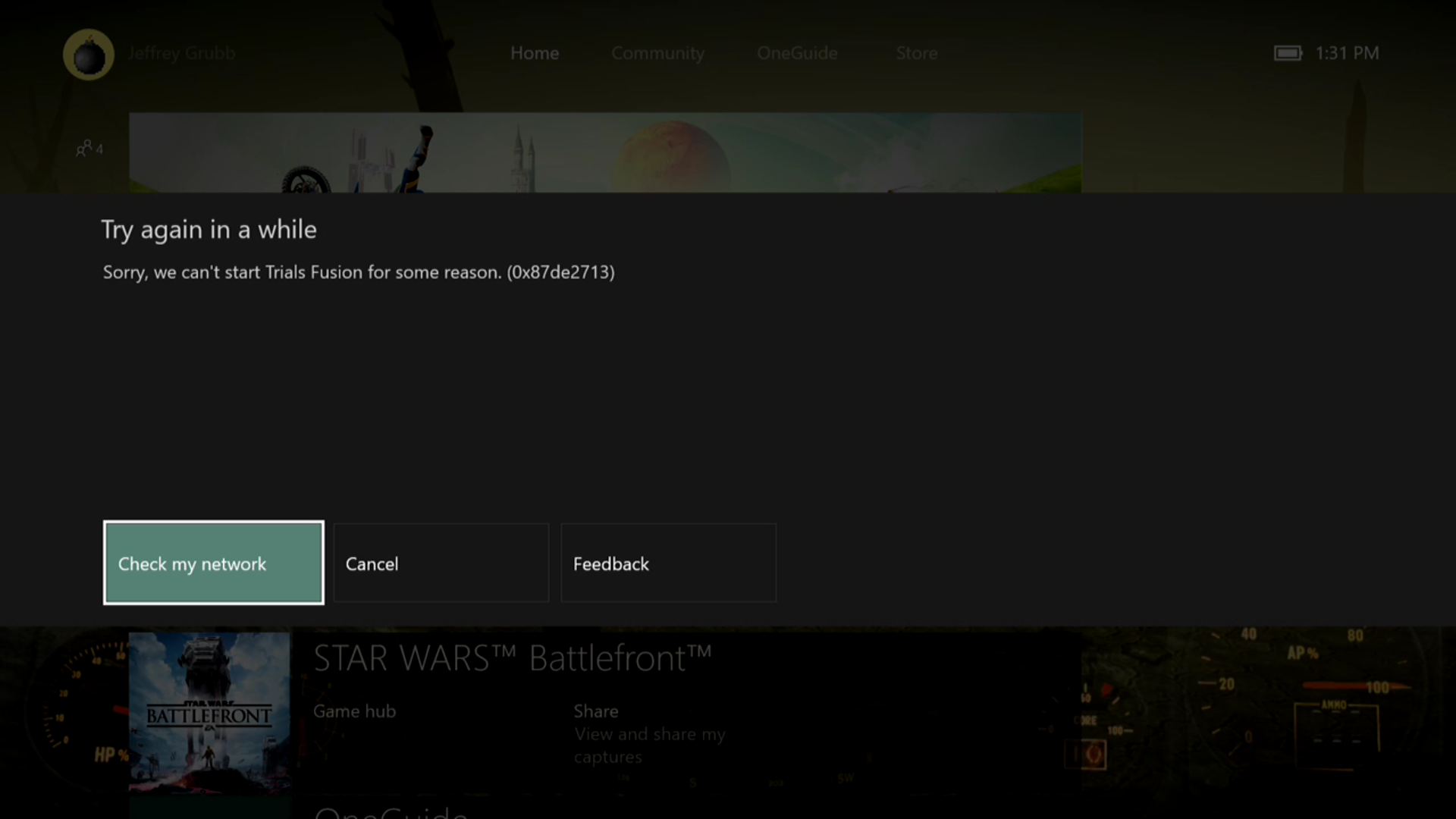 Above: One of the error messages you may see when trying to boot up a digital game on Xbox One.

“Some users may be experiencing delays when launching digital content,” a Microsoft spokesperson told GamesBeat. “We are working quickly to fully restore services.”

And here’s the statement from the status site:

“We understand some of you might be having a tough time signing in to Xbox Live. Additionally, we realize that some of you are experiencing issues purchasing new subscriptions or managing existing subscriptions. We want you to know our top engineers are on the case and are working toward a fix. Thanks for your patience in the meantime! We will provide an update as soon as we know more.”

Xbox Live is coming off a number of outages last week where the network was not fully functional for three straight days. This is one of the worst streaks for a console’s connectivity features since a cyberattack forced Sony’s PlayStation Network offline for five solid days during the week of Christmas 2014. That same assault also took down Xbox Live for 24 hours. Since then, Xbox Live and PSN have both had multiple minor outages.

For more, let’s check in with Snoop Dogg to see how he feels about the situation.

Updated at 10:50 p.m. Pacific time with information about the current status of the outage.