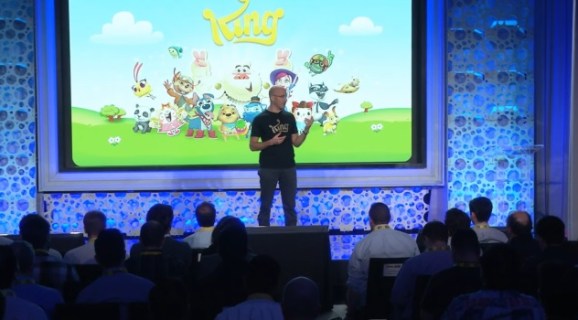 Call of Duty and Candy Crush Saga are now married.

Activision Blizzard today completed its $5.9 billion acquisition of King Digital Network, the maker of Candy Crush Saga. The combined company will have more than 500 million users, as it extends its grasp from console and PC online games like Call of Duty and World of Warcraft to King’s Saga mobile lineup.

For 2016, Activision Blizzard is projecting combined revenues of $6.25 billion and operating income of $2 billion. Earnings per share will be an estimated $1.75. The final purchase price amounted to $18 per share in cash for King. That makes Activision Blizzard the largest U.S.-based game company — and a formidable competitive force that will put pressure on a variety of rivals across several major game platforms.

“We now reach over 500 million users across almost every country, making us the largest game network in the world. We see great opportunities to create new ways for audiences to experience their favorite franchises, from Candy Crush to World of Warcraft to Call of Duty and more, across mobile devices, consoles and personal computers,” Activision Blizzard chief executive Bobby Kotick said in a statement. “On behalf of Activision Blizzard, we are delighted to welcome Riccardo [Zacconi, King’s CEO], Sebastian [Knutsson, a cofounder and chief creative officer], Stephane [Kurgan, chief operating officer], and all of King’s talented employees to our family.”

Altogether, Activision Blizzard will have more than 1,000 titles in its library, including Call of Duty, Skylanders, Destiny, World of Warcraft, StarCraft, Diablo, Overwatch, Heroes of the Storm, Hearthstone, and Candy Crush Saga. King had an estimated 318 million monthly unique users as of the fourth quarter, and it has developed more than 200 games.

“We are thrilled to now be a part of Activision Blizzard and can’t wait to start working together,” Zacconi said in a canned statement. “I want to thank everyone at King for all of their hard work since we founded the company 13 years ago. We are excited about the future as we continue developing more exciting games and explore new ways to serve our players and build on the greatest franchises in interactive entertainment.”

King will continue to be led by Zacconi, Knutsson, and Kurgan and operate as an independent unit of Activision Blizzard.