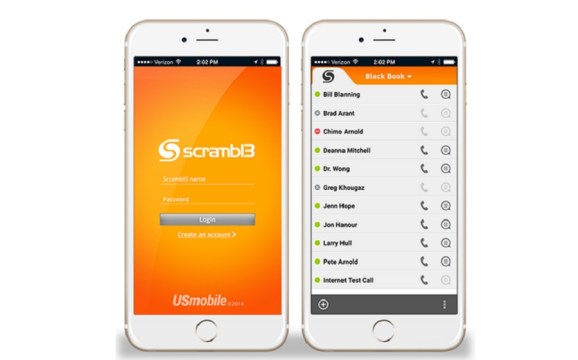 USMobile is launching its Scrambl3 encryption app for iPhones and Android smartphones today.

The app enables users to make secure calls and send secure messages without worrying about eavesdropping, according to USMobile, which worked with the National Security Agency on a previous project. The app is sure to stir debate, however, as Apple continues to square off against the FBI over access to an encrypted iPhone belonging to one of the shooters in the San Bernardino massacre.

The app, which is aimed at both consumers and enterprises, took more than 2.5 years to develop. USMobile had to build a backend infrastructure with the help of IBM to create the enterprise-grade technology needed to deliver encrypted data and voice calls over the network without any annoying delays, Hanour said.

Although USMobile worked with the NSA to build secure architecture from 2011 to 2013, Hanour said that the system does not have a backdoor, or any secret way to circumvent the app’s security. The secure service is free for 30 days, after which it costs $10 a month. Since you have to pay with a credit card, Hanour said he doubts that terrorists are going to be interested in his app.

“We don’t maintain those credit card records, but you still have to go through credit-card processing,” Hanour said. “The actual phone number can be tracked by law enforcement.”

Enterprise customers can use the technology to build a $2,000 server and create a closed network for their employees. USMobile operates its own network for individual consumers, who remain anonymous to the company. The app, which requires iOS 9.2 or higher, creates a top-secret grade virtual private network (VPN) for making calls and securing messages. To ensure security, USMobile created a “dark Internet tunnel” so that communication is cloaked. No call or message is stored on any server.

“To make this cost-effective, we knew we had to bring the costs down,” Hanour said. “We have implemented it as a software-defined network. We used elliptic curve cryptography, as RSA is no longer secure.”

If you’re a high-value target for hackers and corporate espionage, then the app is probably a good idea for you, Hanour said. This includes people like business executives at publicly traded companies, politicians, law enforcement, lawyers, celebrities, and others with an increased need for privacy.

USMobile was formed in 2013 as a spinoff from Cyvergence Corp and is based in Irvine, Calif. The company has raised $4 million to date and has 16 employees.

“USMobile’s Scrambl3 has implemented the most salient security features of NSA’s ‘Fishbowl’ (secure phone) initiative secure Voice over Internet Protocol (VoIP) architecture, and has a number of unique characteristics that put it in a class ahead of existing commercial secure VoIP techniques,” said encryption expert Yuliang Zheng, a professor of cryptography at the University of Alabama at Birmingham, in a statement.