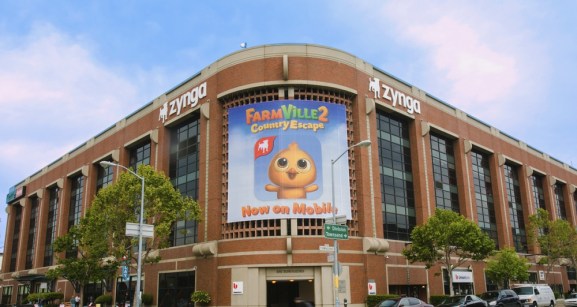 The social mobile game company’s headcount is down around 2,300 or so, significantly down from its peak above 3,500 people. That means it doesn’t need as much space as it once did. Zynga acquired the space, which was once the U.S. headquarters of Sega, for $228 million. Now it maybe worth much more, given the boom in San Francisco real estate.

Zynga confirmed the headquarters is up for sale, noting it said so during its fourth quarter conference call. GamesBeat didn’t actually notice that. It plans to sell the building and then take out a long-term lease. Right now, the move is in the exploratory phase. If the company sells, it plans to lease back so employees can stay in the building.

Founded in 2007, Zynga grew dramatically on the popularity of its Facebook games. It went public at a $9 billion valuation at the end of 2011, but then it faltered. The company had a hard time getting its footing in mobile games, and its audience on Facebook’s desktop platform started to decline.

Mark Pincus, the chief executive and the company’s founder, brought in former Electronic Arts and Microsoft Xbox executive Don Mattrick to help turn things around. Mattrick cleaned house on the management team and acquired NaturalMotion for $527 million, but he found the turnaround task to be a tough one. He left in April 2015, and Pincus returned to the CEO job.

For the past three quarters, Zynga has been paring back and reporting breakeven results. Its market value is around $1.9 billion today, as investors have become patient for the turnaround. But Zynga doesn’t necessarily need any cash, as it has more than $900 million on its balance sheet already.