Keyboards are hot lately. Microsoft bought one earlier this month for a quarter of a billion dollars, and then released another just yesterday. 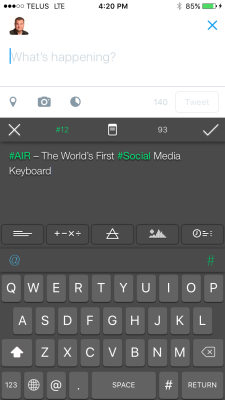 One reason: Keyboards are the one thing that tie all apps together.

Tying things together is not a big part of one of the newest entrants on the keyboard stage, Air, created by Vancouver-based company Bubbl. But tying people together most definitely is, VP of marketing Colin Osing told me via email. The new keyboard makes it simple to hashtag, “at-mention” friends on Instagram and Twitter, and even customize and annotate images for posting to social networks, all from right inside the once-lowly keyboard.

“Every social platform is different — Instagram, Facebook, Twitter, Tumblr … LinkedIn,” cofounder Nathan Oshidari said. “All these great spaces have incredibly different user experiences. We had to find a better way to create content, we needed a faster way to tag and mention across all social platforms. The funny thing was, the keyboard was right there in front of us the whole time.”

Indeed — it’s present in all apps.

If you connect Air to your social networks, it will recognize your contacts and friends and allow you to tag them or mention them. Hashtagging — a particularly taxing chore in Twitter and Instagram that’s nonetheless important for people who want their content to be spread socially — is easier, as the keyboard surfaces common tags automatically for easy one-tap insertion. And yes, the keyboard allows you to emulate “@jack” (Twitter founder Jack Dorsey) by composing a longer-than-140-character epistle, converting it to an image, and posting it for all to read.

“We wanted to give people a quick and easy way to beat 140,” said cofounder Troy Spracklin. “AIR Memo … converts text into an image without you having to leave Twitter.”

I installed the keyboard and have been using it for a few days in Twitter, Facebook, Flipboard, and pretty much every other app I need a keyboard in. While Apple doesn’t make it easy to install new keyboards — install app, then go to settings, find keyboards, enable the new one, go back to an app that uses keyboards, tap and hold the globe icon, and finally, yes finally, you can select the new keyboard — once I got over the inevitable hassles of learning a slightly new keyboard, I have been using it regularly.

It’s saved me time, although I know I’ve barely scratched the surface of what it can do.

We know that messaging apps are eating the app store, and to some degree eating traditional social media’s lunch — growing faster, and taking up more and more of mobile users’ time. The question is: How will Air address messaging as well as social media?

Bubbl says a big update is coming soon. That may address the messaging as well as social media use cases. And perhaps, Android: the keyboard is currently only available for iOS.