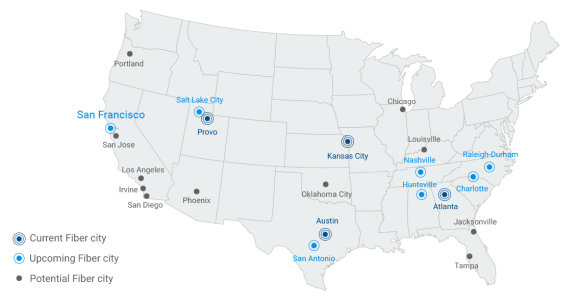 Google has announced that it’s looking to bring Fiber to San Francisco and will be using the city’s existing fiber network to help accomplish that. It said that by doing so, “we can bring service to residents more quickly.” However, the company was light in terms of the details of not only the service and timing, but also the specific locations that will be connected.

San Francisco was passed up as one of the first cities to get access to Google’s gigabit high-speed broadband Internet connection, but after 21 metropolitan cities have been tapped to receive Fiber, now it’s the City by the Bay’s time. Google explained that San Francisco has “a long history of creativity, innovation, and development” along with “dozens of colleges and universities.”

Michael Slinger, the program’s director of business operations, said in a blog post that Google is working with organizations to make it easier for people to get free Internet access. One of its first partnerships is with the Nonprofit Technology Network to bring the Digital Inclusion Fellowship to the city. Now in its second year, this initiative seeks to increase digital literacy and broadband adoption; individuals selected for the program will work to find ways to help more communities get online.

Google isn’t looking to blanket the entire city with Fiber. Rather, it’s going to bring service to some apartments, condos, and affordable housing properties. This isn’t the first time that the company has utilized existing infrastructure — when it launched in Atlanta, Google leveraged that city’s network.

While this may seem like a blessing, it’s worth noting that some providers do offer limited gigabit Internet services in San Francisco, such as Sonic and MonkeyBrains. And Google will run into more competition with AT&T and Comcast when it jumps into the race to bring fiber to not only the city, but other parts of the Bay Area like San Jose and Oakland.

This announcement comes days after the company said that its most recent city to service would be Huntsville, Alabama. The company already has a presence in Kansas City, Austin, Atlanta, and Provo, with upcoming launches in places like San Antonio, Salt Lake City, Nashville, Charlotte, and Raleigh-Durham.