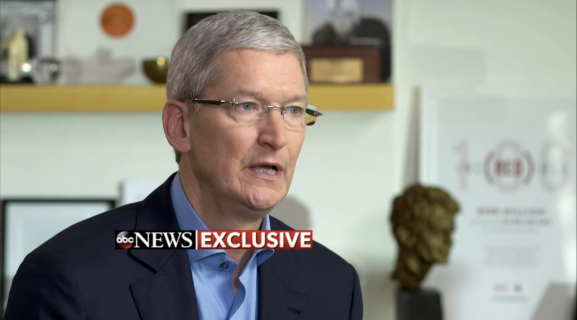 Speaking on national television in his first public remarks since the rapid proliferation of the Apple-FBI iPhone encryption debate, Apple CEO Tim Cook today spoke out against the notion that the controversy boils down to privacy concerns versus the cause of national security.

“I know people like to frame this argument is privacy vs. national security,” Cook said in a 29-minute video interview with David Muir of ABC News on “World News Tonight with David Muir.” “That is overly simplistic, and it is not true. This is also about public safety.”

Cook argued that devices hold information about people’s families, and their children, in particular. And Cook waxed patriotic several times in the interview, mentioning the many emails of support he has received from people in the military and police departments.

“I love democracy,” Cook said. “That is who we are. I think the best thing to do is to discuss, collaborate, and work together on whatever the solution may be.”

That wasn’t the only bit of patriotism on display, though. “This is our country,” Cook said. “This country is about life and liberty and the pursuit of happiness. It’s about freedom of expression and freedom of speech. These are core principles of America.”

Cook said he was surprised that no one had contacted him directly about the court order to compel Apple to assist the FBI in unlocking San Bernardino shooter Syed Rizwan Farook’s iPhone 5c. Still, that didn’t make Apple less willing to work with law enforcement in this case, he said.

He said that when he meets with President Obama — he did not say when that would be — he will be reiterating many of the points he was making to Muir. He added that he was also looking forward to speaking with Congressional representatives. Sure enough, some elected officials have talked of plans to introduce a bill that would form a committee on encryption.

Muir asked Cook if this was the biggest challenged he’d faced since becoming Apple’s chief executive in 2011. The question seemed to trip up the otherwise well-prepped Cook.

“I faced a lot of challenges, but I’ve never felt sort of the government apparatus before. And so yes, I would say this is right up there,” Cook said.

He then appeared to regain his composure.

“But it’s not my sole focus by any means,” he said. “We’re focused on making great products.”

See our timeline of the Apple-FBI debate here.