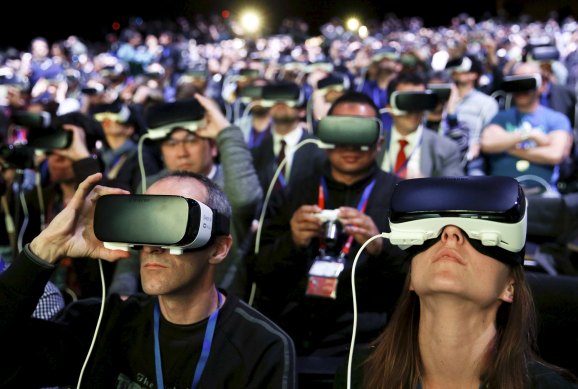 People wear Samsung Gear VR devices as they attend the launching ceremony of the new Samsung S7 and S7 edge smartphones during the Mobile World Congress in Barcelona, Spain, February 21, 2016.

You’re going to need a big ol’ pile of cash if you want to get into high-end virtual reality on the PC, but that is creating an opportunity for Samsung and Google to sweep up entry-level consumers.

Mobile VR is on track to reach $861 million in revenues this year, according to data firm SuperData Research. That is a big increase for a market that is only just getting off the ground thanks to Samsung’s Gear VR (which it makes with Oculus VR) and Google’s Cardboard casings, which enable smartphones to power virtual reality games and apps. While Samsung and Google are not jumping out of bed each morning to fight over less than $1 billion, both are treating this as a chance to establish themselves as leaders for early adopters and developers.

Investment bank Goldman Sachs is predicting VR will grow to $110 billion by 2020 if you also include the related augmented reality space that combines virtual imagery with the physical world. With that kind of money up for grabs, Google and Samsung see an opportunity to control how you download VR software. The Google Play store already has dozens of VR apps, and keeping that library growing is one of the key ways that the companies could stand to profit.

So Google and Samsung are doubling their efforts to capitalize on mobile VR spending and controlling software distribution.

“Samsung will soon expand the mobile VR audience by bundling free Gear VR headsets with preorders of its Galaxy S7 smartphone,” SuperData chief executive and head researcher Joost van Dreunen said. “Google, which already dominates the low-end of mobile VR with Cardboard, wants to move upmarket and is rumored to be working on a Gear VR competitor.”

Google’s rumored VR system will sit somewhere between the Gear VR, the high-end Oculus Rift, and Microsoft’s AR HoloLens. It will probably use primarily smartphone components, like the Gear VR does. Google is reportedly building it specifically for VR, so it’s not a smartphone holder, like the Rift. And it will not need to hook up to your PC because it is an all-in-one device like the HoloLens.

A device like that would get expensive, but it could probably pack in a bigger battery and more sensors than the Gear VR, and it wouldn’t need a $1,200 PC to power it.

“With the Oculus Rift and HTC Vive costing $600 and $800 respectively [on top of the cost of a PC], mobile is how mainstream consumers will experience VR in the near future,” said van Dreunen.