Mike Gallagher came out swinging in defense of the game industry in a recent talk. He has to be feisty, as he’s the industry’s chief lobbyist as the CEO of the Entertainment Software Association.

Gallagher is gaming’s biggest cheerleader, and he showed that at the recent DICE Summit elite game industry event in Las Vegas. He’ll be speaking at our GamesBeat Summit 2016 conference on May 3 and May 4 at the Cavallo Point Resort in Sausalito, California. He’s joining a stellar group of other speakers at the invitation-only event. Gallagher is the chief spokesman for an industry that has reached $90 billion in sales around the world, according to tech adviser Digi-Capital.

Back in 2011, the ESA won its historic battle over video game violence in a decision by the U.S. Supreme Court, which declared video games to be an art form protected by the First Amendment.

“We established the constitutional rights of everyone in this room to be as creative and they want to be and for gamers to consumer the games they want to play,” Gallagher said. 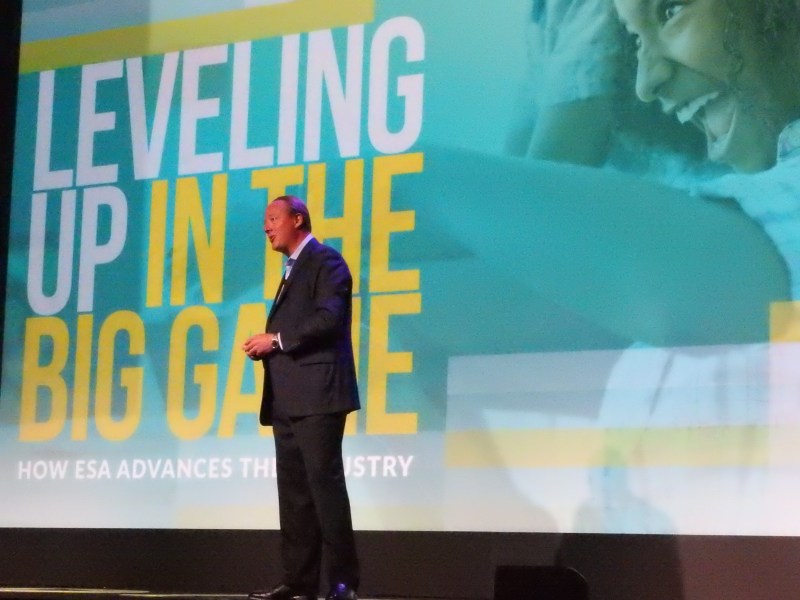 Above: Mike Gallagher says that 80 percent of gamers intend to vote in the upcoming elections.

Before that decision, the game industry was always playing defense, firing missiles in a relatively primitive way, as if it were shooting at aliens in Space Invaders.

The industry was trying “slow them down from misconceptions about our industry, that somehow our industry was responsible for the evils of society. That was appropriate at the time,” he said. “At that time, our issue set boiled down to ‘We didn’t do it,’ and ‘Don’t take our stuff.'”

Today, he said, Congress has a video game caucus with more than 50 members. And the Video Game Voter’s Network has more than a million members. A poll said that 80 percent of gamers intend to vote in the upcoming U.S. presidential elections.

“Today, our friends vastly outnumber our enemies,” he said.

Even Arnold Schwarzenegger, the former governor of California who signed the bill that led to the Supreme Court fight on game violence, is now plastered all over TV and the Internet in ads for Machine Zone’s Mobile Strike game. 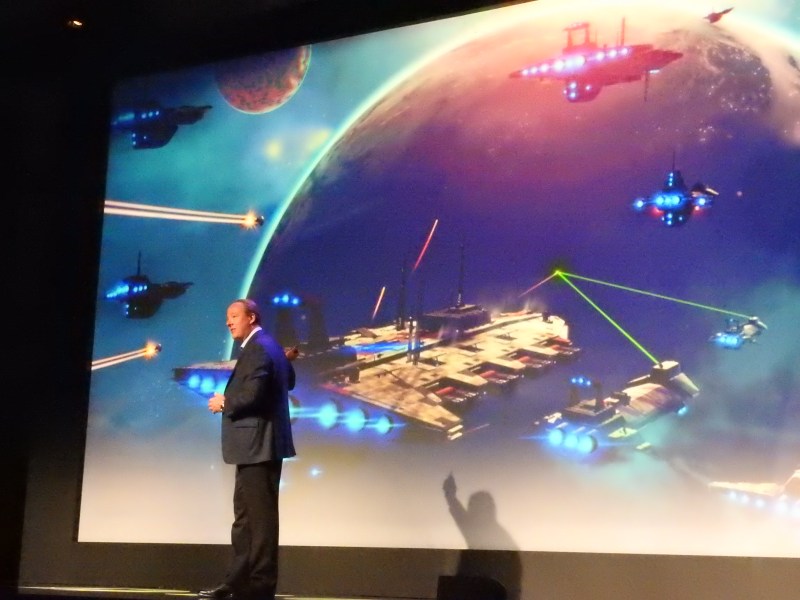 Above: Mike Gallagher of the ESA compares the game industry’s horizons to the exploration of the sci-fi game No Man’s Sky.

Two decades ago, video games were a niche. Now it’s an economic driver, he said, with $23.5 billion in the U.S. in 2015 sales across physical and digital segments. And it remains an innovative force in technology, too — just look at how games could be the killer app for virtual reality.

“Today, we are in a different game. The games you have made have altered the entertainment landscape, and changed sports, business, and technology itself,” he said. “We are not just playing defense anymore. We are openly and proactively pushing a positive agenda for this industry. If we were once Space Invaders, today we are No Man’s Sky,” a reference to the upcoming sci-fi game that lets you explore unlimited worlds.

“Our industry thrives anywhere there is talent and an environment conducive to innovation and growth.”

The U.S. has 1,800 video game facilities (companies and offices), with more than 1,600 publishers and developers. And 406 universities have degrees or curricula in video games.

No longer is the game industry a “punching bag for politicians,” Gallagher said. He noted game sales have climbed to great heights. Fallout 4 shipped more than $750 million in a day. It took Star Wars: The Force Awakens about 15 days to reach the same threshold. (Of course, this is an apples-to-oranges comparison, as movie tickets cost less than games). 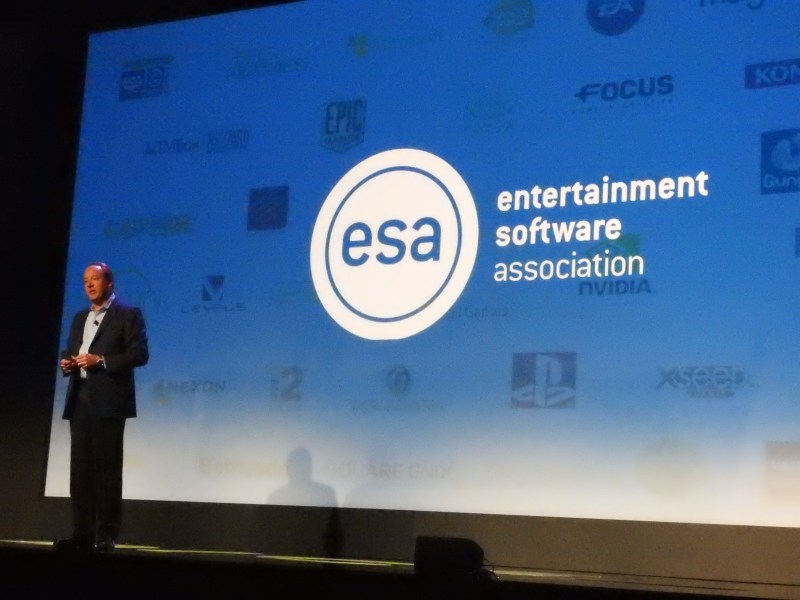 Above: Mike Gallagher says there’s room for everyone in the game industry.

Games are a more recognized part of mass culture, too. The Smithsonian dedicated an exhibit (which went on a ten-city tour) to video games, and there are several movies like Warcraft: The Beginning coming that are based on video games. Orchestras like the Video Games Live show are drawing bigger crowds when they play video game music.

After Electronic Arts decided to pull its booth from the Electronic Entertainment Expo (E3), the big trade show in Los Angeles that happens every June, rumors of the event’s death surfaced. Gallagher said the show is evolving and experimenting, like it should.

Gallagher said the show has received more than 50 billion media impressions per year for the last three years. And he noted last year’s show exhibitors were up 60 percent from the year before. The roster included 27 virtual reality companies.

Gallagher said that the industry has to remain vigilant. After the Sandy Hook Elementary School shooting in 2012, the game violence issued reared its head again. The game industry met with Vice President Joseph Biden to make its views known about the lack of connection between video games and real-world violence.

“We are more mature, we are stronger, we are much more effective in the world that matters in setting policy,” Gallagher said. 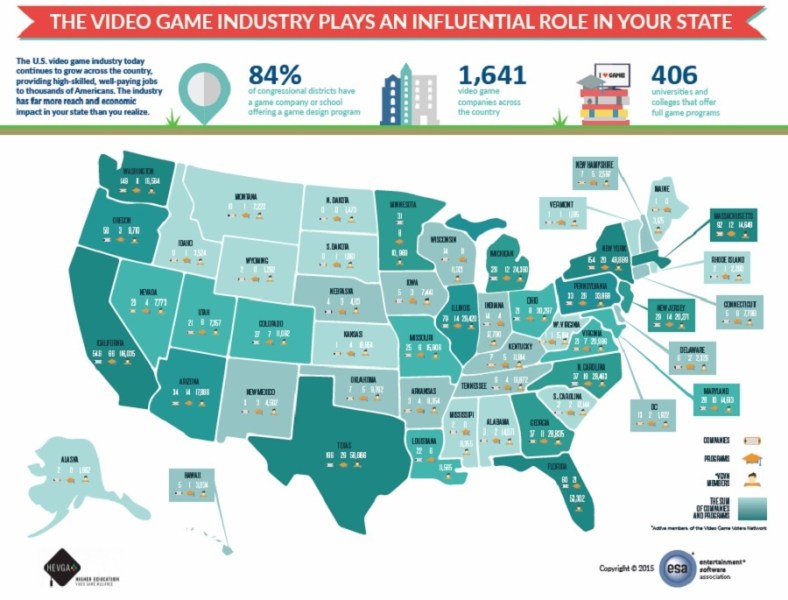 Gallagher also addressed the criticism the industry has received for having so few women and underrepresented minorities.

“There’s room for everyone in this industry,” he said.”Everyone is a gaming. Men or women. All different demographics. Let’s show our maturity as an industry to create an environment where everyone is welcome.”

Asked what he thought about the fallout of the Gamergate (gamer rage movement) controversy, he said, “I’m so encouraged about the positive trajectory of this industry when it comes to diversity.”

Gallagher said 22 percent of industry jobs today are held by women. This isn’t bad, considering other tech fields have dramatically lower percentages, he said. But it isn’t good enough, Gallagher added. He noted that 31 percent of students enrolled in the 180 schools in the Higher Education Video Game Alliance (which focuses on the cultural, scientific, and economic importance of games) are women.

“So we have 31 percent more that are coming,” Gallagher said. “That’s helpful. It’s nowhere near that for engineering. When you look at most other major universities, they’re operating around 15 percent, 16 percent. So I see the pipeline looks much brighter when it comes to the diversity issues of today.”

And he noted how major games now often feature playable female characters or main characters who are women. Examples for the former include FIFA 16, which now has female soccer players, as well as Call of Duty: Black Ops III, Assassin’s Creed Syndicate. And games with female lead characters include Rise of the Tomb Raider, and the upcoming Mirror’s Edge Catalyst, Horizon: Zero Dawn, and others. 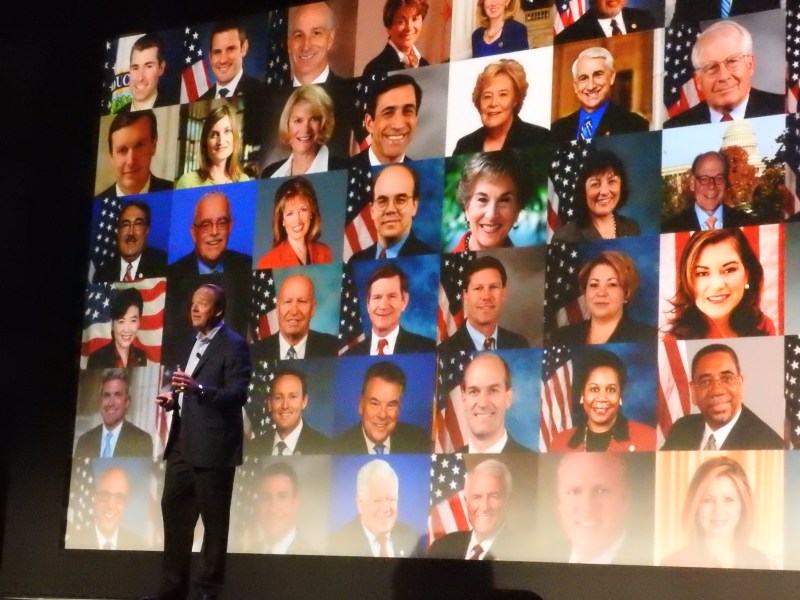 Above: Mike Gallagher of the ESA says the video game caucus in Congress has 50 members.