Facebook has announced that it is finally expanding its live video-streaming tool to Android devices, but only in the U.S. for now.

Today’s news comes one month after the social network opened Facebook Live to all iOS users in the U.S., following a short period during which availability was limited to celebrities and those with verified profiles. 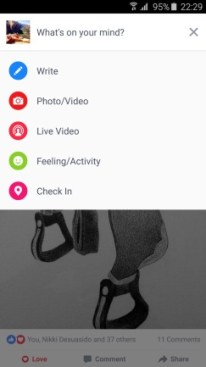 Similar to Twitter’s Periscope, Facebook Live lets you broadcast yourself to the world, in this case by tapping the status update box and hitting the little Live Video icon. You can then choose who you wish to share the video with. In many ways, it’s more accessible than Twitter’s Periscope, as it doesn’t require a separate mobile app — it exists within the main Facebook client.

During the period of iOS-only streaming that preceded this launch, Facebook said that more than 50 percent of people who have watched live-streams have done so on an Android device.

Facebook CEO Mark Zuckerberg announced the Android launch during a town hall Q&A in Berlin today, where he was also asked what he would do if he were Twitter CEO. He gave a meandering, indirect response to the question about how he would help his rival get out of its rut, but he did take the opportunity to tout the benefits of Facebook Live.

‘Live’ is going to be an awesome thing for public figures… Imagine your favorite public figure or politician having the power to broadcast from their pocket, go live, have an audience of thousands of people.

There’s a lot more that needs to be done to give people the ability to connect with the people and figures they’re interested in. I think you’re going to see a lot of that on Instagram and Facebook, and if the Twitter folks do a good job, I think you’ll see a lot more of that on Twitter too.

Though Facebook Live on Android is limited to U.S. users for now, the feature is also being expanded on iOS to more than 30 countries today.