If there’s one thing the world doesn’t need, it’s another social messaging app. From Facebook Messenger and Snapchat to WhatsApp, Telegram, Viber, and beyond, it’s safe to say that most bases are covered.

A new startup launched out of stealth in the U.K. this week, with a mission to become the “next-generation social networking and messaging platform.” The company plans to gradually roll the service out across Europe from next month before landing in the U.S. later this year.

Yubl (rhymes with “bubble”) is a mobile-first (natch) service available on Android and iOS. As with existing social apps, you can connect with friends using simple text-based messages and photos. But Yubl lets you do much more than that — it serves up a blank canvas for users to create something entirely from scratch.

You can choose a background color, throw in some photos and videos from your camera roll, move them around, graffiti over the top, change the fonts, plaster some stickers … you get the idea.

Besides being able to create pretty pictures or visual monstrosities, you can also build interactive buttons to solicit opinions from your buddies — “What shirt should I buy?” “Pizza or sushi?” And so on.

Everyone in the group sees the same thing and can convey their feelings about a certain topic of discussion. What you end up with could look a little something like this: 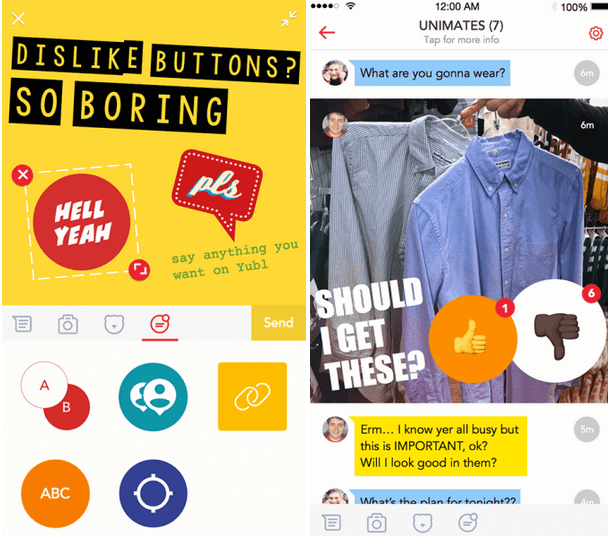 There are three main areas to Yubl. “Private” is for one-on-one or group chats for those who have been invited to join.

“Public” is, as its name suggests, an open forum to search for Yubls shared across the entire social network, be they your own friends and followers or celebrities and brands. And it’s this area that gives the biggest hint as to how Yubl plans to monetize — it has struck deals with some well-known companies, including Red Bull, Starbucks, and ASOS, which will interact with users and publish content through the app. The third area is “Explore,” which is essentially for finding content, brands, creators, and celebrities to follow on Yubl.

Though more will be added in the future, at launch there are five interactive buttons available: Vote, Count, WebLink, Whereabouts, and Pinpoint. 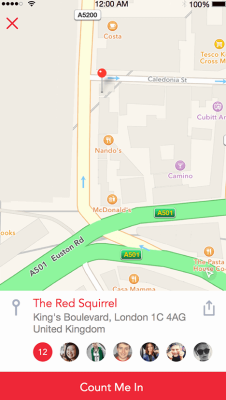 The latter two are particularly useful for group meetups, as they let you query friends, who can respond by pressing a button to post their location on a map that’s visible to everyone in the group. Similarly, you can place a pin on a map to show where to meet at a future time.

That’s Yubl in a nutshell.

VentureBeat was given a demo of the app and its functions in London last month, and the most immediately striking facet of the app was the incredible amount of attention to detail. It was slick, well-designed, and ridiculously well-planned, with all the necessary letters dotted and crossed. It was clear that this wasn’t another fly-by-night startup bootstrapped through weekend bar work.

Indeed, the company has been testing the app in universities around the U.K., has worked with focus groups to garner feedback, and has topped and tailed the app in preparation for the big launch.

Upon further probing, we find that the app was more than two years in the making and that the firm already has more than 60 employees and £15 million ($20 million) in private financial backing. For a prelaunch startup, that’s pretty staggering.

Among the founding members is Gareth Evans, previously the founder and CEO of a communications company called Synergy, acquired by DDB in 2011.

“Yubl has been built for today’s users and their needs — we’ve created something that encompasses everything people love about mobile technology and much more,” said Evans. “It delivers a richer, more engaging, and hassle-free way to communicate by bringing users closer together with friends, interesting content, and their favorite brands and personalities. The only limit is their own imagination.”

Also involved is Jonathan Ellis, cofounder of a company called Psygnosis, which designed and published games such as Lemmings more than 25 years ago. Psygnosis was acquired by Sony in 1993 in a deal that was to be the genesis for the Sony PlayStation two years later.

Big backers, big money, big attention to detail. So does this mean that Yubl is destined for big things? Maybe. But there is something that doesn’t quite sit right about a product that has been so cautiously planned. That may sound counterintuitive, but when you look at all the great social apps of our time — Facebook, Snapchat, Twitter, WhatsApp — they all got off the ground with little money or fanfare and minimal market research. Above all, they all became established organically, through a mixture of scrappy execution, word of mouth, and luck — being in the right place at the right time.

Completely disregarding what the product is, what it does, and who it’s aimed at, I have my doubts that something that has been so meticulously “figured out” in advance can truly take off in a big way. That’s not to say it won’t, of course. Yubl isn’t aimed at people like me — someone who still remembers making plans for a night out without the luxury of a mobile phone. Yubl is aimed at millennials, those who have a difficult time imagining a world without mobile phones.

All things considered, there’s never any surefire way of knowing whether an app will resonate with the global masses. I was among the first people to write about Snapchat back in 2012 — I thought it was a quirky and fun little app, but if you’d told me then that it would go on to become one of the major social messaging apps of our time, I would’ve laughed in your face.