Pikachu, Squirtle, Charizard, and all their of friends turn 20 years old today.

On this day in 1996, Pokémon Red and Green came out in Japan for the Game Boy. It spawned a series that has sold over 200 million copies. But Pokémon’s reach goes far beyond video games, as it has also inspired a cartoon that has run for more than 900 episodes, 19 movies, and a popular card game that still receives updates (it has a total of 68 sets, including the original release and expansions). Fans even play the game competitively, and Nintendo has earned plenty of cash thanks to sales of merchandise like T-shirts and plush with the brand earning $1.5 billion annually. The only thing more shocking than a bolt from Pikachu is how relevant Pokémon still is today.

Few people had high expectations for Pokémon when it launched. It came out for the aging Game Boy, which released back in 1996 and had seen a decline in popularity. However, Pokémon itself soon revived interest in the platform. It was a perfect portable game. You could play for hours making your way through a large cave or beating a tough Gym Leader, or you could just spend a few minutes training your Pokémon or searching for new monsters to catch. It also thrived thanks to its social mechanics, since friends could use the Link Cable to hook up two Game Boys to trade or battle Pokémon.

I was 12 when the Red and Blue versions came to the U.S. in 1998. It hit at a perfect time in my life. I played Red for over 100 hours. I was young, but I was old enough to understand some of its complexities. That was the great thing about Pokémon. While its concept — catch a bunch of animals and make them your friends — might seem childish, it was basically a role-playing game like Final Fantasy or Dragon Warrior. Battles are turn-based, Pokémon earn experience points and level up, and you exploit your enemy’s weaknesses if you want to win.

Above: Japan got Red and Green, but we had Red and Blue.

But Pokémon wasn’t just a clone of older games. It had the ability to evolve, which turned Pikachu and the gang them into new, more powerful creatures. It’s one of the greatest carrots-on-a-stick in gaming history. Who doesn’t want to keep playing to see just how cool their Pokémon look once they evolve? Of course, if we’re talking about carrots on sticks, let’s not forget about the challenge to catch every single Pokémon. While you don’t need to in order to beat the game, having all 151 pocket monsters bagged you instant bragging rights. It motivated players to trade with friends and even wait in large lines at Toys ‘R’ Us for a chance to win a rare Pokémon.

My love quickly extended outside of the game. I quickly spent what extra money I had buying packs of Pokémon cards and VHS tapes of the cartoon. Keep in mind, I got into Pokémon pretty quickly. Even in 1998, I was following the gaming scene very closely. I knew about Pokémon. I knew it was a big deal in Japan. I remember asking my Hollywood Video if they had any tapes of the cartoon to rent. They had no idea what Pokémon was. The same goes for Walmart when I was asking them if they had any cards.

Very quickly, that was never the case again. Within a year, everyone knew what Pokémon was. The games, cartoon, and card game all turned into giant hits. Soon, you saw Pikachu everywhere. He was even a float in the Macy’s Thanksgivings Day Parade. 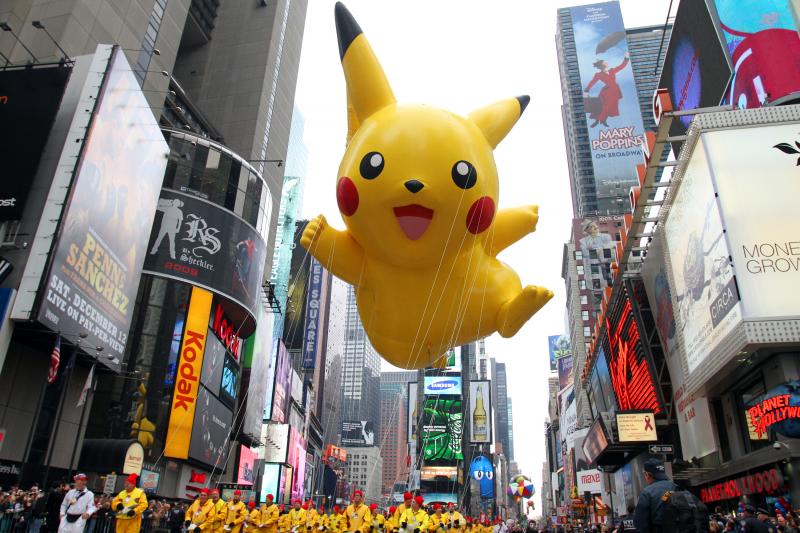 Above: Cute, and mildly terrifying.

Pokémon quickly became an important part of Nintendo’s stable of recognizable properties. When the first Super Smash Bros. came out in 1999 for the Nintendo 64, Pikachu was one of the original fighters, along with icons like Mario and Link.

And then we had the sequels. Starting with Pokémon Gold and Silver 1999, Nintendo has managed to keep the series fresh by consistently releasing new games that introduce more Pokémon, making sure that trainers have to keep up if they really want to claim that they’ve caught them all. At first, only 151 Pokémon existed. Today, that number is at 722. The sequels also introduced more mechanics, like a day and night cycles, new types of Pokémon, and even weird minigames that let you dress up your critters.

Still, the main games still follow the formula introduced in the originals. You pick one of three starter Pokémon (Fire, Water, or Grass type), travel the world capturing more monsters and beating eight Gym Leaders while simultaneously taking out a sinister criminal organization, and then challenge the Elite Four and become champion. Even the most recent entries in the main series, 2013’s X and Y series, didn’t stray too far from this formula. It did, however, finally introduce 3D models. The original game’s battles featured static, black and white sprites for each Pokémon. Of course, Pokémon fights are about to look more impressive than ever thanks to Pokkén tournament, the next spinoff game in the franchise. It’s a 3D fighting game that originally came out in Japanese arcades, but we’ll get to play it on the Wii U on March 18. Nintendo also recently revealed the next games in the main series, Sun and Moon.

This 20th anniversary gives us a chance to look back at the landmark series. All this week, we’ll post features that examine the franchise’s popularity and creation and pay tribute to its past (and probably a few that are just really silly).

It’s going to be a fun week for fans of Pokéstuff at GamesBeat.