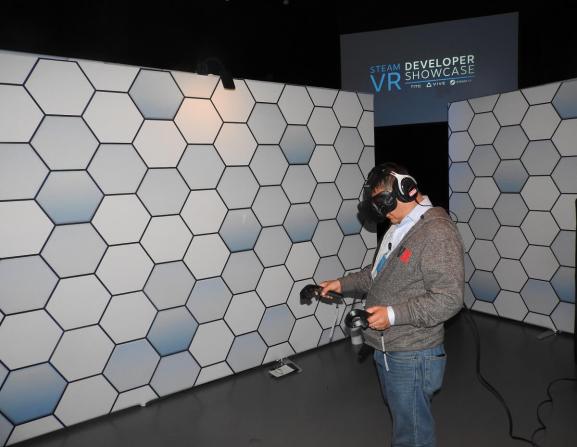 Vive is the best VR headset.

Virtual reality is still in its early days, but it’s amazing how capable it is of making your bank account look a lot less impressive.

HTC revealed today that is has sold more than 15,000 HTC Vive VR kits in the first 10 minutes after it went on sale for preorder. That’s not bad for an unproven technology that costs $800 and requires a $1,000 PC. This comes as companies like Facebook, Google, and Samsung are all moving into this sector. Investment bank Goldman Sachs predicts VR could grow into a $110 billion business by 2020 along with the similar augmented reality tech that mixes digital images with the real world — and Vive is one of the consumer products that could drive those revenues.

Vive is a PC peripheral (from HTC and its partners at Valve) that you wear over your eyes and ears. This enables you to feel like you are inside of a game or a simulated experience. And unlike other VR devices, Vive has a number of extra sensors that can track your movement around a room. This amps up the feeling that you are present in another place, and it is the main selling point of the Vive compared to its competition.

HTC Vive is the second major high-end VR headset to go on sale this year. In January, Oculus VR — a subsidiary of Facebook — starting selling its Rift head-mounted display for $600. The company didn’t share any numbers about that performance, but the first shipments sold out in a matter of minutes. That pushed new orders from March into April and then into May by the end of the first day. Today, new Rift preorders won’t ship until July.

These early successes are showing that VR has a lot of interest. This is something we’ve seen with mobile virtual reality and devices like Samsung’s Gear VR (that it builds in partnership with Oculus) and the Google Cardboard phone holders. This market is on track for $861 million in spending this year.

Many people have wondered if the build up to VR over the last few years will lead to any money, and now we have several products where consumers are showing they’re ready to part with their cash. Now it’s just up to software developers to built momentum on top of that.