Ashes of the Singularity is a real-time strategy that uses all the brains in your computer’s processor and graphics chips to render as many as 100,000 moving objects on the screen at the same time. That lets you stage huge land battles for the control of planets in an intergalactic war.

The game from Stardock and Oxide Games is perhaps the biggest beneficiary of Moore’s Law, the prediction made by Intel chairman emeritus Gordon Moore that computing power would continuously improve at a regular rate. The game allows you to command an army of sci-fi forces against a human or computer opponent in real-time action. I had a hands-on preview of the game that confirmed the title is an exercise in the mastery of top-down strategic management.

Ashes of the Singularity takes a lot of resources to run, and it may prompt people to buy new gaming PCs. Jon Peddie Research estimates that worldwide PC gaming hardware sales will grow from $24.6 billion in 2015 to $26.1 billion in 2016 and $30 billion by 2018. Advanced Micro Devices, in particular, is touting the game as a potential benchmark for its hardware products. Heck, President Obama ought to endorse this game so it can keep the American economy going. 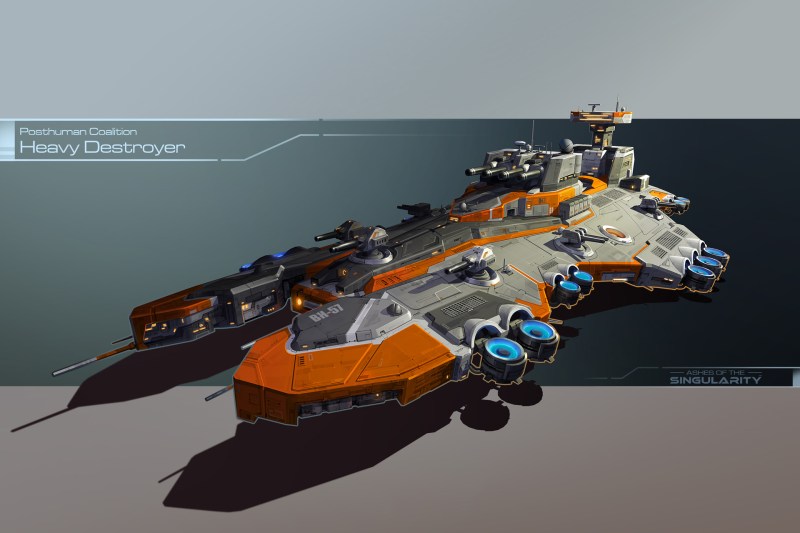 Above: Heavy destroyer in Ashes of the Singularity.

Games like this have been done before. StarCraft is a 2D version, with fewer things to control. That game is far more easy to manage, but it’s not as breathtaking. Chris Taylor’s Supreme Commander series was also a very big stab at doing RTS in 3D.

But this game is like StarCraft on steroids. You can zoom in on the details or pull out to see the whole picture. The vehicles themselves aren’t particularly spectacular, even at 4K resolution. But the landscape is very beautiful, and when the action starts, the colorful death lasers light up the battlefield. The 3D objects in the scenes are illuminated by eight different light sources, which means that the shadows cast by the objects look much more realistic, as do the objects themselves.

The game is set in the year 2178. The Post-Human Coalition is in a battle against the Substrate, an artificial intelligence. You will be able to play throughout the galaxy, conquering multiple planets through something called the Ascension Wars in the single-player campaign. You have to take over one planet at a time.

The battles start out slowly with just one base, and you have to begin building engineers. They can build mines, so you can collect metal resources. You can set up energy collectors as well. With the resources in hand, you can then set up a factory to start making tanks and then put them on repeat manufacturing cycles. That repeat order saves you a tremendous amount of time. But if you want to micro-manage, you can give it a try.

But there’s so much going on in this endless battlefield that you just might be losing a huge part of the battle if you get preoccupied doing something else. Chris Kowal, vice president at Stardock, said in an interview with GamesBeat that the landscapes are procedurally generated, which means they are automatically generated and can be different each time you play a battle. 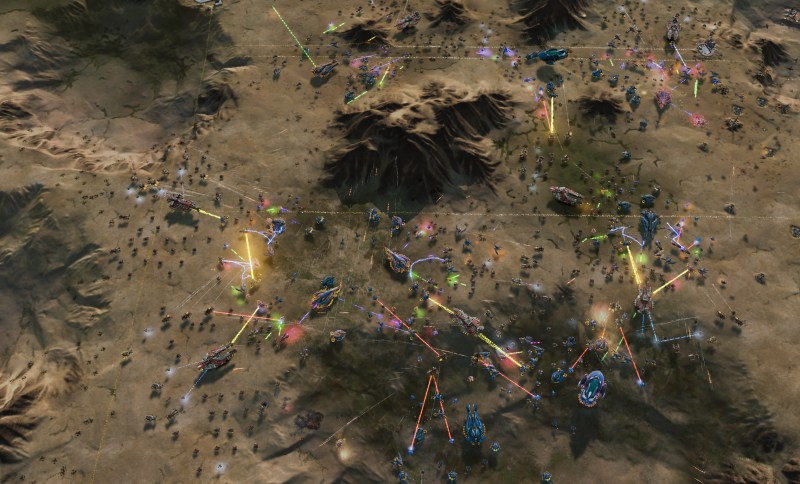 Above: The landscapes are procedurally generated in Ashes of the Singularity.

I sent my engineers and tanks out in a mad rush to grab as much territory as I could. I found that I could expand in all directions, often without seeing any enemies. Once I had a few territories conquered, I could manufacture as many units as I wanted. I set a rally point for the new units, and then sent them off in new directions.

When my units collided with the enemy, the fog of war lifted, and the combat started. I found that I didn’t have to micro-manage the battle. I just had to amass more troops than the enemy did. I also had to stick to the combined arms concept, where I had to make sure I sent tanks, artillery, and aircraft into the battle at the same time. Once you do that, you can sit back and watch the battles unfold. Your own units do a good job of taking on the A.I. units on their own.

Multitasking is key. You have to keep the factories humming, the mines working, and the armies searching for new enemies. You can automate some of these tasks. But you have to pay attention to the overall strategy, and you have to focus when it’s important.

Ultimately, when you hit your enemy’s big bases, you start to fight some bigger engagements. I played the game on the beginner level, but you can ratchet up the smarts of the A.I. if you want to a big challenge and huge battles. At some point, the enemy started weakening, and I started taking over most of the resources. Then the momentum was in my favor, and I finally crushed the enemy.

The game is pretty fun. It isn’t easy to manage. But it has ways to make that job easier, so you can concentrate on strategy. I’d like to know more about the story to see if it will compel you to play one more mission, re-creating that feeling that you have when you’re playing a well-written game like StarCraft. Otherwise, even the big world battles may feel empty.

Ashes of the Singularity is taking advantage of the DirectX 12 multi-adapter technology, allowing PCs to use multiple graphics processing units (GPUs), even from different manufacturers. The game will require a quad-core processor running 64-bit Windows, six gigabytes of main memory, 2 gigabytes of graphics memory on an Nvidia GeForce 660 or an AMD R360 GPU. That’s a fairly hefty PC. The title is coming out in 2016. 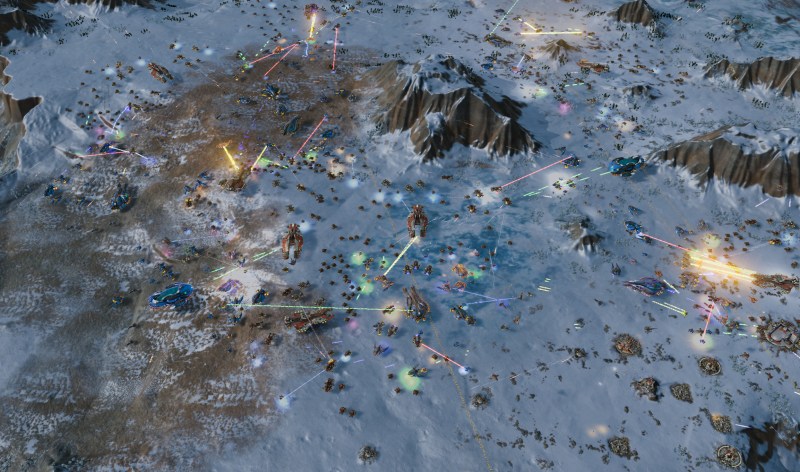 Above: Can you count the number of units on the screen in Ashes of the Singularity?