Microsoft held an Xbox spring showcase last week, showing a bunch of games to the press. Here’s a summary of what they announced, as well as links to the interviews we did during the event.

We saw a hands-on preview of the first act and first full video episode of Quantum Break, the big exclusive coming April 5 for Xbox One and Windows 10. We interviewed Microsoft’s Phil Spencer, head of Xbox, about it as well as Greg Louden, senior narrative designer at developer Remedy Entertainment. We also ran a series of video captures from me playing the first act. Please ignore the fact that I died a lot.

Please note that I died a lot during my demo of Dark Souls III, which debuts on Windows 10, PlayStation 4, and Xbox One on March 24 in Japan and April 12 in the rest of the world. This fantasy role-playing game is known for its merciless difficulty.

I interviewed Palmer Luckey, founder of Oculus VR, about Minecraft in virtual reality. Unfortunately, the demo made me a bit seasick.

I played a demo of Pit People, an ID@Xbox independent game that was the silliest thing at the event.

And I tried Ashes of the Singularity, a sci-fi real-time strategy game that is like StarCraft on steroids. I also interviewed Stardock’s Chris Kowal about the game.

The event also had numerous other announcements. Microsoft said it is launching Gears of War: Ultimate Edition for Windows 10. I played the 4K version, and it was beautiful. Still pretty hard, though.

Microsoft also showed of Capy’s Below, a survival and exploration game coming for ID@Xbox, on the Xbox One.

Microsoft and Iron Galaxy announced eight new fighters joining the arena in Killer Instinct: Season 3, the free-to-play fighting game that will be available March 29 on the Xbox One and Windows 10. The release includes the Arbiter from the Halo franchise.

One of the prettiest games of last year is getting a makeover. Ori and the Blind Forest: Definitive Edition will debut on March 11 on Xbox One and Windows 10. 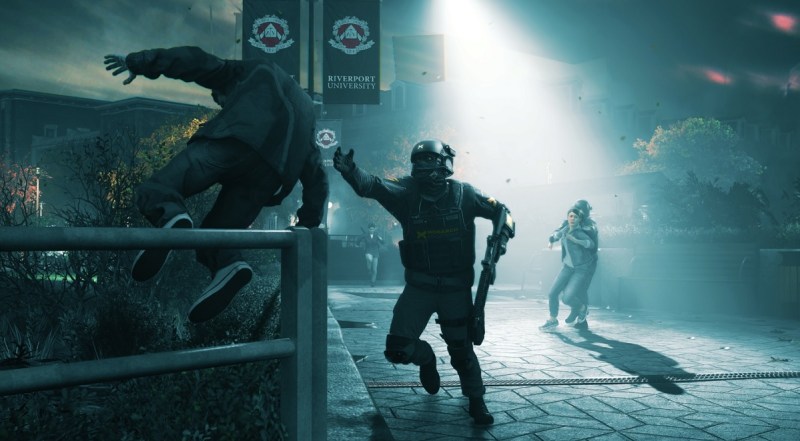 Above: These people are frozen in time in a scene of Quantum Break.

Lastly, Microsoft announced these changes for the Windows 10 Xbox app and Xbox One dashboard: