Microsoft showed off a hands-on demo of Minecraft in virtual reality on the Oculus Rift VR headset. The preview experience was cool, but it also made me sick from too much motion.

In an interview with GamesBeat, Oculus VR founder Palmer Luckey said Minecraft in VR was an important game, but not necessarily critical to the success of the Rift. But it is the result of a close relationship between Oculus and Microsoft. Microsoft is adding its Xbox One controller to the Oculus Rift bundle, and it has also created a version of Minecraft that runs in virtual reality. These kinds of partnerships are what Oculus VR needs to do its part in building the VR industry, which could be a $30 billion business by 2020, according to tech advisor Digi-Capital. On top of that, Minecraft is a huge phenomenon with more than 5 billion hours of video content watched on YouTube alone.

Microsoft showed off the VR title on Windows 10 as one of numerous Xbox One and Windows 10 games coming this spring. At this point, I’ve tested enough VR to know that any demos with a lot of motion give me motion sickness. Racing games and run-and-gun shooters make me woozy. Roughly half the population suffers from my kind of sensitivity to VR. With demos that are well done, where the graphics keeps up with the speed of the headset in motion, the seasickness is minimal. In this case, I was able to keep the sickness under control by blinking or looking away. But it was definitely there. 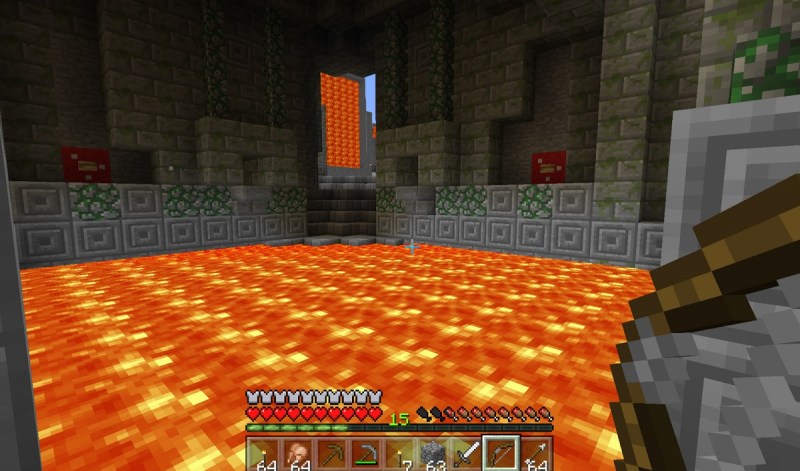 Above: Minecraft in VR. A lava puzzle.

The fact that I’ve gotten seasick shouldn’t dissuade everybody from trying this one. Oculus can flag it with a warning about comfort level in its app store, as it is doing with a lot of published titles. In this block-building game (which has shipped 22 million on the PC and there are more than 100 million registered users on all platforms), you pretty much get a similar experience to what you get on a normal computer or console, except you can look around more easily. You can also see things that you have built from different perspectives. You see everything from a first-person view.

At first, I just wandered about, using the Xbox One controller to move around. With the inventory system, you can look at an object and then click on it to activate it and move it on down to your live weapons bar. Switching weapons is pretty easy, using the same system. Microsoft’s Mojang had the game on a scripted walkthrough. There were some live turkeys or chickens wandering around. I rode a mine cart. That was kind of fun as I sped down a rollercoaster-like experience. That cart didn’t make me sick. Rather, it was simply moving around with the analog stick. That surprised me, considering the graphics were so blocky. 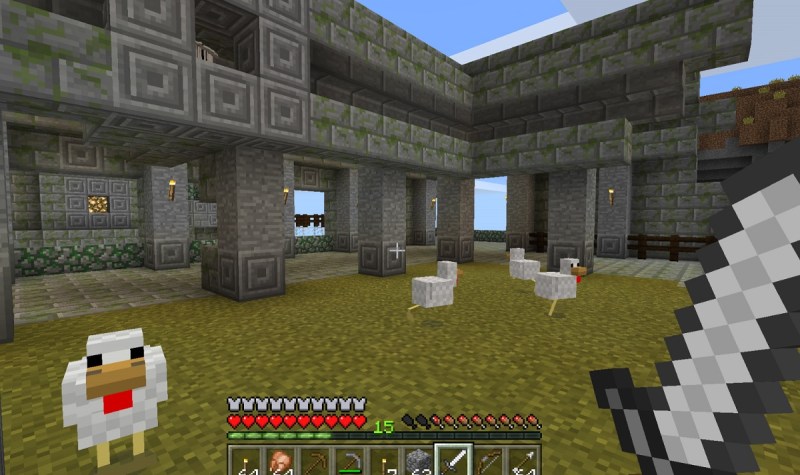 Above: Turkeys in Minecraft

There were some cool moments where I saw some lava effects, a bunch of flaming arrows, and some big guys come and knock out of a bunch enemies attacking me. I had to solve puzzles, like how to get across a lava pool. And at the end, I stepped off a ledge and fell headlong into water. That was a cool experience that looks great from a first-person VR perspective. But I think they have to do something about the motion sickness, or I won’t be playing this one for very long. 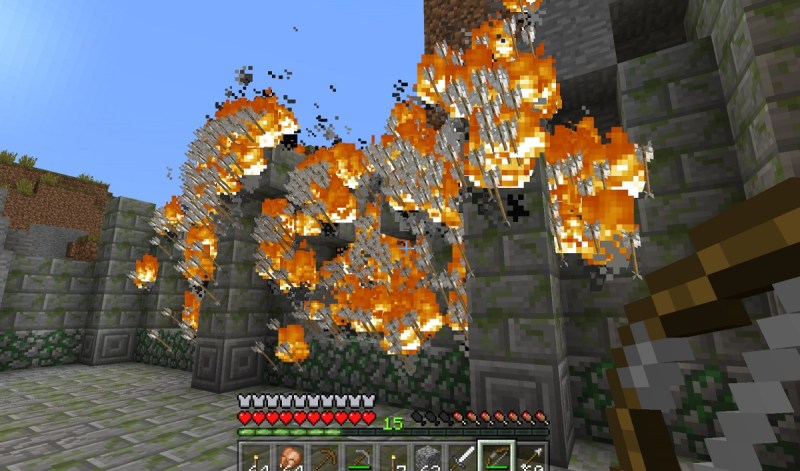