Pit People is not going to win Microsoft the console wars. It’s not going to get more gamers on the PC. But it just might be silly enough to attract a small smattering of fans who like this sort of thing.

I saw a preview of developer The Behemoth’s Pit People for the Xbox One and Windows 10 at Microsoft’s spring Xbox showcase. It is a turn-based strategy role-playing game narrated by an obnoxious fellow with an exaggerated, nasal British accent. It was so bad that I couldn’t believe anyone would actually make this game. Then I remembered that this kind of thing really turns on some gamers, and it has the potential to be a real hit among these folks. It’s so silly that people might want to play it, in a Monty Python sort of way. 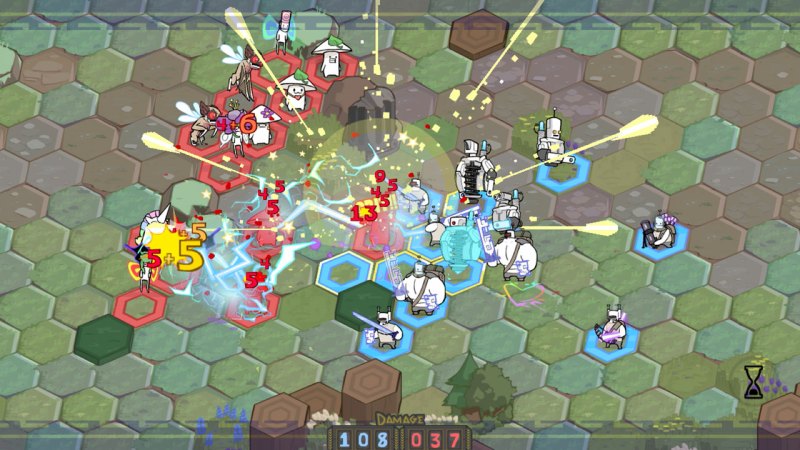 Above: Pit People can have a frenzy of action with enough enemies on the map.

Pit People’s story starts with thugs attacking the farm home of Horatio, a hero, whose son is tragically crushed by a giant boot. Horatio seeks revenge and runs into an ally in the form of a woman named Pipistrella. After a couple of level battles, I had no idea what the story would be about.

Your job is to “master the destiny of a full case of tragically unique heroes” as you plot a course across an apocalyptic wonderland. On a hexagon-covered map, you have to move adjacent to enemies during your turn. Then you attack them. They defend themselves, and then you start all over again. Some of the bad guys have bows and arrows, but one of them may walk onto the map with a pair of Uzi submachine guns. Rather than fire the submachine guns, the enemy tries to hit you with them.

All the while, there’s either green goo or confetti falling from the sky. In combat, you have one or two heroes that you control. You fight the enemies in melee combat or with ranged weapons. Each character can be customized. When they attack or heal, they gain experience points.

The game has a cartoon art style, but there’s plenty of blood and body parts. So it’s not exactly a kids game, except for the humor. You’ll find yourself in a battle in a medieval castle, and there will be a body of a dead shark on the ground. The narrator interjects every now and then. 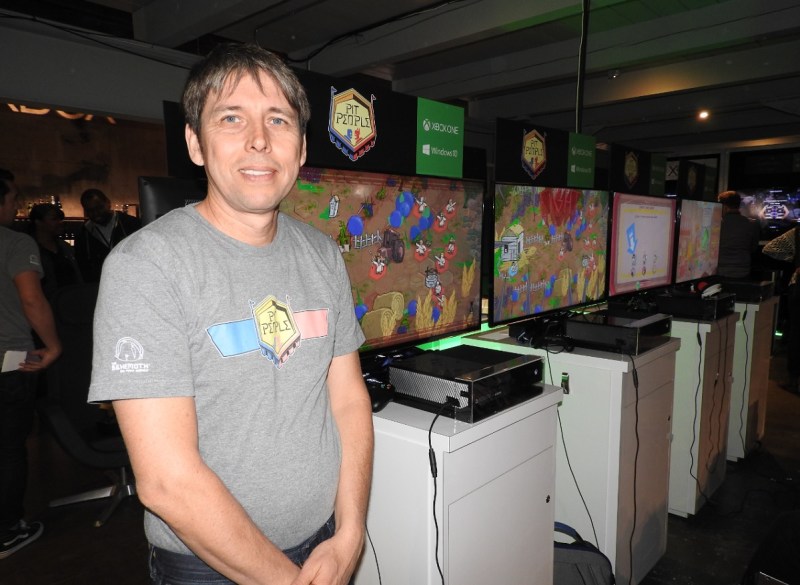 Above: John Baez of The Behemoth shows off Pit People at Microsoft’s Xbox event.

John Baez, the cofounder of The Behemoth, told GamesBeat, “Mostly, the way the studio works, because we get bored very quickly, we try a different genre every time. Pit People is our first foray into a turn-based strategy game. It’s a fast-paced, turned-based adventure game.”

As for its goofiness? “Totally,” Baez said. “We’re known for our artwork and off-the-wall sense of humor to keep everybody interested. People will find the humor and art similar to our last games. We like to sprinkle characters from previous games in our new ones.”

Asked why the company used hexagons, he said, “A lot of developers trace their love back to war games. A hexagon shape allows for a lot of flexibility in how to move your character within a set of rules that can be easily understood.”

Then there’s this crazy big box that serves as the controller for the game. Baez showed off the title with a crazy box that is reminiscent of the arcade days. 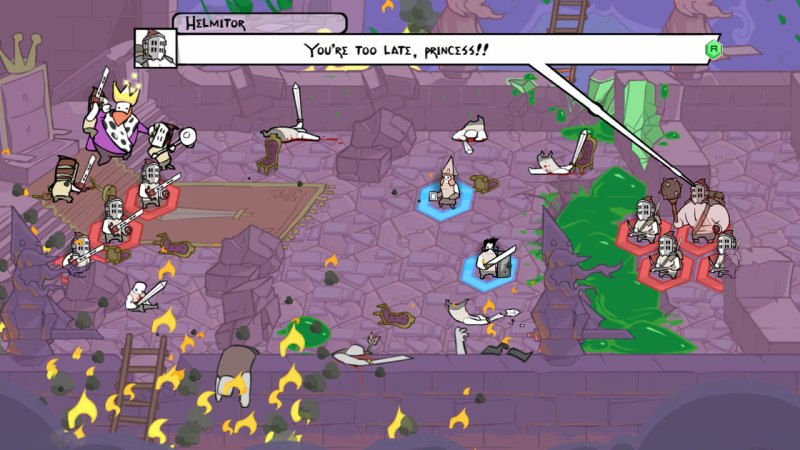 Above: In this battle, you try to save the king but wind up teaming up with Pipistrella.

San Diego, Calif.-based The Behemoth has been around since 2003, and it is known for zany titles. It has previously published Alien Hominid, Castle Crashers, and BattleBlock Theater. All of the games have been hits, and they cemented The Behemoth’s reputation as a solid indie game studio. The company has 10 employees, and it has a sister division that does game testing.

I suppose somebody has to try being the silliest of game companies. It worked for Monty Python in the movies and television.