Zynga’s founder has stepped down from his role as chief executive officer for the second time, and this has Wall Street thrilled.

The social-gaming publisher’s stock price is up around 8 percent in after-hours trading to $2.31 after finishing the day at $2.16. This is a sign that investors are happy to learn that former Electronic Arts executive Frank Gibeau is replacing Mark Pincus as chief executive officer. After dominating gaming on Facebook for years with hits like FarmVille, Pincus failed to transition Zynga’s success to mobile as the market shifted to smartphones and tablets. The ex-CEO oversaw a period where Zynga shed 85 percent of its stock value since 2012. Now, the market is hoping that Gibeau, who has had success on mobile with EA, can patch things up.

Mobile gaming is a $30 billion business, and that’s money that Zynga investors want a bigger piece of. But while publishers like Candy Crush Saga’s King and Clash of Clans’ Supercell have swooped in with games that make nearly $1 billion every year, the FarmVille company hasn’t only failed to produce anything comparable, it bungled one of the few successes it did have.

Today, Zynga has no games in the top 10 of the Google Play market’s highest-grossing apps list. That was the company’s goal when it released FarmVille 2: Country Escape in 2014. But that game is now No. 51 in the United States on Android and No. 152 in the U.S. on iPhone, according to tracking firm App Annie.

But Zynga is hardly “the FarmVille company” these days. It is much more a social-casino publisher with Zynga Poker and a number of slots games based on brands like The Wizard of Oz and Grease. But when the company tried to lean into casino by updating its Zynga Poker game, it ended up alienating its fans and destroying the game’s reputation.

“We had to think about what matters, about how we want our players to feel,” Zynga Poker creative director Nick Giovanello said back in 2014 about the big update. “It’s more social, with an emphasis on quality, immersive, and personal, like you have permission to dream, play, and win.”

But that attempt to make Zynga Poker more mobile led to a game that players hated. They just wanted to play cards, and Zynga started throwing too many unwanted features in the way of that action.

The result of this meddling is obvious when you look at Zynga Poker’s life on the grossing charts. 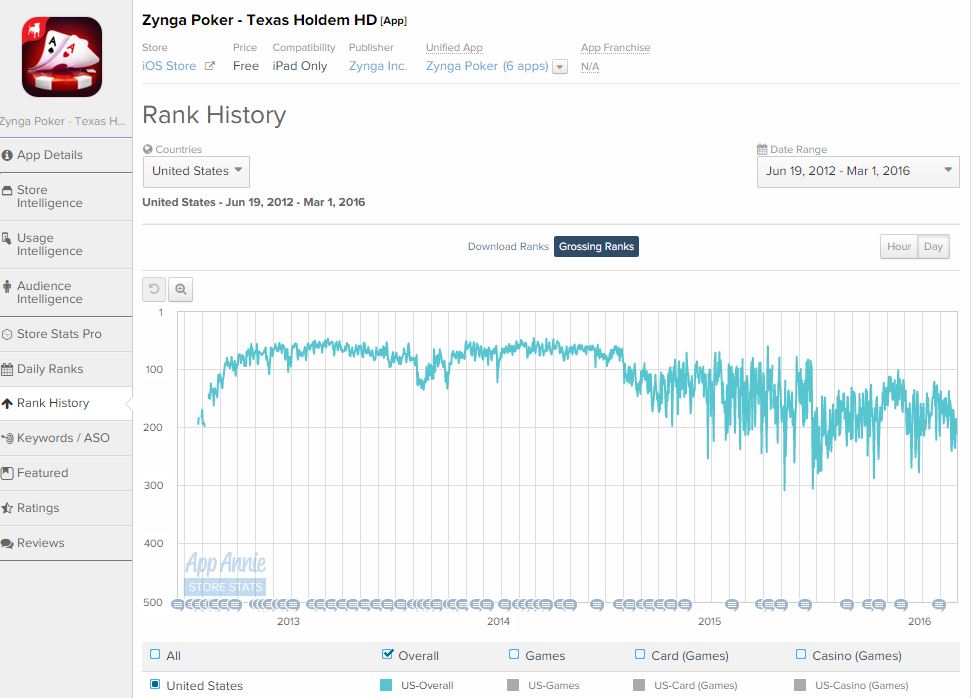 Above: Poker was a steady revenue stream for Zynga, and now it is struggling to keep it relevant.

In July, as the update went live, players rejected it and stopped spending as much money. Since then, Poker has jumped up and down on the charts, but Zynga is clearly struggling to keep players happy. The company even gave up and reintroduced a second app called Zynga Poker Classic in October 2014, but the damage was already done. Zynga Poker and Zynga Poker Classic now rarely ever crack the top 100 highest-grossing apps on iOS.

Gibeau may have the acumen to handle this situation. He has spent the last seven months on Zynga’s board of directors. Before that, he guided EA to success with mobile hits like The Simpsons: Tapped Out and a transition to free-to-play for brands like Madden and FIFA. Some of this might not translate to social casino, but it’s possible that Zynga may want to have another crack at more lucrative genres like fantasy and mobile strategy.

That’s a strategy that Zynga might still have the talent to pull off, but the market will have to wait and see if Pincus, who still owns a majority share of Zynga, will give Gibeau the time to make it happen.